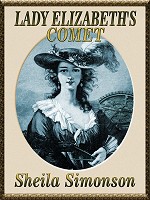 I first read “Lady Elizabeth’s Comet” a few years ago when I was lucky enough to score a copy of it through a used bookstore. Ever since then, I’ve touted its merits to those looking for intelligent heroines, beta heroes and wonderful storytelling. I’m delighted that Uncial Press has brought it out in eform and I can talk it up some more.

Did I say intelligent heroines? Lady Elizabeth Conway is one of my favorites. Her passion is astronomy yet you don’t use it as a prop to get her into silly situations from which the hero must rescue her nor to force her to act up in public in order to Make a Point. It also plays a pivotal role in whom she marries by making her open her eyes to the truth of her convenient betrothal. Ah, I never said she doesn’t make mistakes and I thank you for hers. They make her well rounded and believable with nary a hint of Mary Sue-ness. She commits some blunders, has to suffer for them and grows from the experience.

Tom Conway is a delight. He’s a man who could easily hold a grudge against Elizabeth’s father. As the man’s less than appreciated heir, he was basically forced into the Army while the Earl tried without success to father a son. And now that the man’s dead and Tom has succeeded to the Earldom, he has to deal with all the weighty problems attendant on the position as well as taking up the title of Head of the Family. Yet he never shirks his Duty or Position, dealing with it all with a wry smile on his face and even devising the perfect birthday presents for two of Elizabeth’s younger sisters. He’s man who’s not had the easiest of lives yet he never moans or acts less than a gentleman. Quiet strength is what I think of when he comes to mind.

I love the witty, dry humor of this quiet, gentle regency. You don’t rush us from Event to Event but allow the story to slowly spool out as these two fall in love. There are areas where cliches could have been introduced or used yet thankfully were not. Characters who could have been two dimensional stereotypes, bullies or idiots who instead were well done in their own right and who advanced the story without taking it over.

It’s been a few years since I last read it and it was with a little trepidation that I flicked on my ereader. Would it hold up to my rosy memories? Was it still the wonderful book I remember? Yeessss, it does and it is. A