I had read some of your older historical novels when I first got back into reading romance lo these 15 years ago and, hate to say it but, though they were good, they didn’t set me on fire. The description of this book as the beginning of a “heartwarming new series” didn’t light a fire either because usually when books or movies are described as “heartwarming,” I get hives as generally this means they’re treacly messes. So why, in the face of this lack of rah-rah enthusiasm did I start the book? The first page and the hint that the grandmother character has some piss and vinegar in her along with the dawning hope that maybe your depiction of Southerners might be close to the truth, that’s why. 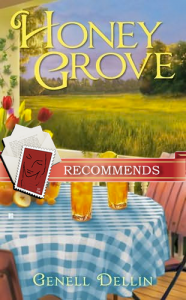 Lilah Briscoe might be at her daughter’s funeral but that doesn’t mean she’s going to break down. She’s not that kind of person after a life of getting the job done and dealing with her irresponsible only offspring. Lilah’s also not sure about whether or not her granddaughter Meredith, who is basically an unknown entity to Lilah, will be the one doing the breaking down and if she does, somebody’s got to keep things moving. But to Lilah’s surprise, Meri proves tougher than she looks. Meri’s also counting the minutes until she can hit the highway and head back to her high powered law firm in New York City. It takes Lilah’s not so subtle hints to get Meri to act like she’s got some raising and stay for the after service gathering at the homestead. Lilah still has some dreams of forging a relationship with Meri and gets her to agree to an early morning breakfast before leaving the next day.

Things don’t go as planned, though, after Lilah has an accident that lands her in the hospital and Meri accidentally hits Lilah’s grumpy cat while going to check on it. With a major case being dealt with back in NYC, Meri doesn’t have time to stick around and after getting things sorted, she’s off. But two weeks later she’s back, jobless and looking like her eyes are two piss holes in the snow. Since Lilah is hampered with a broken wrist and can’t manage her farm alone, Meri begins to pitch in as she tries to get her life back together. As she begins to learn the rhythm and pitfalls of farming, Meri discovers that Lilah has had to take out a loan with the farm as collateral. And things aren’t looking good. Can she devise a way to get them out from a mountain of debt, earn the town’s respect – including that of one smooth talking neighbor – and begin again with her grandmother in this small Texas town?

There are things I immediately like about this book and some that don’t become obvious until the end. The setting and characters are wonderful. It’s easy to see that you are a Southerner. I must be honest and say that I loathe books which portray us as double named hicks who use ain’t all the time and always drop our “g’s” at the end of words. No, no and no. There’s a way we have of saying things and this book nails it. Lilah worries that her granddaughter would “go to pieces” at her mother’s funeral. Then something Meri says “just flew all over Lilah.” And to read “y’all” used properly made me sigh with pleasure. The payoff discovery is that it doesn’t become small town = Fabulous! vs big city = Evil! NYC is never denigrated as a pit of loathsomeness nor is Rock Springs compared to Paradise on Earth.

Another thing which made me sigh with pleasure is the relationship between Caleb and Meri. They’re taking it slowly but there’s no doubt in my mind about how Caleb feels for her – nor does he try and hide it. He’s a hot Texas gentleman from the get go who can flirt a girl out of her reservations with a charm that’s like warm chocolate poured over pound cake. The interaction scenes between them are slow, sweet and never once did I get the feeling of being rushed towards a romance. Too often authors try and ratchet up the sexual tension too early and it feels forced, or worse, silly to me. this is done just right.

Lilah and her friends are wonderful to read about too. Yes, Lilah is reluctant to take money to possibly save her farm from the impending bank note coming due but her reasons aren’t just being stubborn and not wanting to take charity – though the charity part is more believable in a character of her age and background than with some young chit. Instead she doesn’t want to risk pulling Meri or Caleb down financially at this point in their careers should their plans for saving Honey Grove not work out. The idea that Meri devises is not out of the bounds of reality and for it to work, Lilah really is needed – along with the connections Lilah has built up over the years. It’s also a good way to bring Meri and Caleb together without it seeming like silly romantic comedy interactions.

I can understand Lilah’s rivalry with Doreen – after all this is small town life among people who’ve known each other for decades. They aren’t always going to rub along well and long held misconceptions are hard to get rid of. The pie baking contest is the epitome of their relationship and I love how Meri puts her legal courtroom skills to use defending her grandmother. I had wondered if we’d see Meri as a lawyer.

The issues between Lilah and Meri regarding Edie Jo are the heart of the book. Meri had a rough childhood before her mother abandoned her and the emotional results are shown in Meri’s reluctance to trust and ways of dealing with her goals in life. And though it breaks Lilah’s heart to see Meri so scarred by this, it takes a while for Lilah to warm up to Meri too. Lilah wants her granddaughter to be the type she, Lilah, has always dreamed of having – close and centered in her Texas roots. But Lilah has to face up to the fact that Meri is her own woman and that the lost years are lost. They have to warily start all over and I appreciate that you give them time to do this instead of forcing a quick “we are family” resolution.

In the end it is more powerful to me that Meri decides to stay in town, and help with the hands on stuff, rather than going back to practice law because of the love she develops for her grandmother and the farm. The fact that she does get the hot guy too, or at least the two of them are going to try out their relationship and see where it goes, is icing on the fairy cake. But the real center of the book is more Meri and Lilah getting to know and love each other – as they really are and not just as either might have wished their relationship had been if they’d known each other since Meri’s childhood.

This is a nice balance of women’s lit, family drama and romance and that’s a neat trick to pull off. Especially since there are no TSTL or asshat moments either. It takes a while for Honey Grove, the town and the people to sink into Meri’s life but once they have, I get the feeling that she has found her home and her center. Meri’s still got some things to work out in her life and the book ends with a bit of a cliff hanger but I feel that it could be read as a stand alone book with enough closure as well. When I finished the last page, I had to agree with the description of heartwarming. But in this case, the description fits in a good way and I didn’t end up with a sugar overdose reaction. And that’s a tough admission from me. So sign me up for the next book because it’s a place I want to visit again. A-