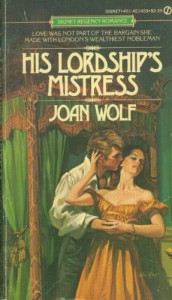 I re-read your book recently in preparation for a year end list.   I was shocked when I checked the DA Archives and did not see a review for it.   I had to rectify that  immediately.   His Lordship’s Mistress is one of my favorite books and your work in the Signet Regency line was really wonderful.   There are so many that I enjoy revisiting and I am so grateful that you decided to resell your ebook rights to Belgrave House so that I could buy ebook copies of many of them.   I do think that His Lordship’s Mistress is the best of your stellar work in that line and I’ll do my best to convey why.

As Janine noted in the review of another of my favorite Wolf traditional regencies, A London Season, your writing style is simplistic and spare.   I really enjoy that style and it’s out in full force here.   His Lordship’s Mistress contains all the classic elements of a Wolf book: the heroine in trouble, gambling leading to despair, Shakespeare, and horses.

Jessica Andover has just buried her stepfather, a wastrel that gambled away her mother’s small fortune and left Jessica and her brothers with a crushing load of debt and no way to support themselves.   Jessica is quite lovely and so a neighbor buys the mortgage and tells Jessica she must either marry him or he’ll foreclose on her home.   Jessica refuses.   She would rather sell herself than indenture herself in marriage to a man who will have control over her and her property again.

Marry for money she would not do. The thought of putting herself into the power of some man for the rest of her life filled her with horror. She might as well sell herself, she thought.

Which had brought her to her second option. She knew the amount of money her stepfather had spent on women. It appeared, she thought grimly to herself, that there was a good chance of making money by selling oneself temporarily.

Jessica tells her family that she is going to Scotland to take care of an ailing aunt who might leave her some money.   She then goes to London to borrow money to pay the mortgage.   The loan allows her six months to pay it off.   She goes to the Convent Garden Theatre   because “Men looked for mistresses who were actresses or opera dancers, so Jessica’s limited worldly wisdom told her.”   She hopes to get a small part but when the manager hears her clear, beautiful voice and her aristocratic carriage, he realizes he has a find.   He casts her as Juliet and a star is born.

Philip Romney, Earl of Linton, arrives in London from his country estate to find everyone talking about Jessica O’Neill.   Linton is an aristocrat among aristocrats.   His lineage can be traced back to the seventeenth century.   He is proud but likeable; utterly correct in his aspect; and unappreciative of excess.   Upon seeing Jessica perform, he determines that he’ll have her.

Everything about this book has a refined feel to it.   When Linton asks Jessica to be his mistress, it is done in the most mannerly way conceivable:

"I have a house in Montpelier Square that is standing empty at the moment," he had said thoughtfully. "It would make me very happy if you would move into it and let me take care of you.”

Even in the dim light of the carriage she had been able to see the blue of his eyes. "I cannot afford to run a large establishment," she had answered in a voice that was not quite her own.

“It is not a large establishment," he had returned gently, "and of course I should make you a monthly allowance to enable you to cover all expenses."

When Jessica set out on this course to regain her independence and secure a future for her brothers, she did not imagine she would become famous or catch the attention of such a man as Linton. Linton does not expect to fall in love with his mistress. But they fall in love with each other for Jessica is a woman of depth and strength and Linton is a man of honor and purpose. Phillip begins to inexorably draw Jessica into serious society in an effort to pave the way for them to be together but everything is set against them. A man does not marry his mistress and he certainly does not marry an actress.

Their relationship and their love and their seemingly helpless situation changes them. Jessica comes to realize how foolhardy she was:

She thought back now to the arrogant, innocent girl she had been. Not for her the sitting back and allowing destiny to take its course. Not for her a convenient marriage to some unknown, boorish, rich man. It was all right for other, less proud, less determined women. Not for her. Not for Jessica Andover

Phillip’s changes aren’t as visible. While we get omniscient views of his life away from Jessica, we never get his point of view.   But as a proud man whose life was smooth as glass, his will was thwarted more than once.  Phillip is always viewed through the lenses of others, but we do get a full picture of who he is through his actions, dialogue, and perceptions of others.

Throughout the story, Jessica’s roles in the theatre, first Juliet and then Macbeth, provide a sort of backdrop for the movements in the book. Juliet as the young, innocent, arrogant when Jessica starts out, believing herself to come out of this unscathed. The story then moves into darker period where Jessica and Phillip are in love. Phillip, though, is more Lady Macbeth urging Jessica to screw her courage to the sticking point. (Neither are trying to kill anyone but perhaps societal expectations). Both plays represent the tragedy and doomed nature of their relationship.   Despite the references to Shakespeare, this novel is not heavy.   Instead it is balanced with humor, love, sadness, and, yes, sexual tension.

While the love scenes are delicate, there is something inordinately sexy in the way that Phillip would say to Jessica:

Silence had fallen, but it was the rich silence of deep, inarticulate companionship. He put down his cup and smiled at her, long and lazily. "Let’s go to bed," he said

Part of the reason, I think, is because of the restrained nature of the prose that once the reader falls into the book, like the titillation of the ankle in the Regency period, the mere reference of “bed” is provocative in His Lordship’s Mistress. This is one book in which the two acknowledge their love for each other early on, but there is significant external and internal conflict for Jessica which provides the drama for this powerful love story.

The book also contains one of my favorite romance declarations of love which Jessica makes some time after Phillip’s initial proclamation:

"I love you," she whispered to him deep in the night. "You own me, body and soul, do you know that?”

His mouth was on her, feeling her silken smoothness as she lay there, open to him as a flower lies open to the sun. His voice, when it came, was husky and unsteady. "The things a man owns, my darling, hold him far more securely than he holds them," he replied.

I don’t know what you are writing now and while I haven’t loved your recent works, I never fail to be swept away in your short novels published back in the 80s. A

This book is out of print but can be purchased in digital form from Fictionwise in DRM free formats.