Devil’s Daughter begins with Phoebe, Lady Clare (daughter of Sebastian and Evie from Devil in Winter) on her way to her brother Gabriel’s wedding. Phoebe is widowed and the mother of two young boys. Phoebe’s late husband, Henry, was her childhood best friend, and frail. Phoebe loved Henry very much. 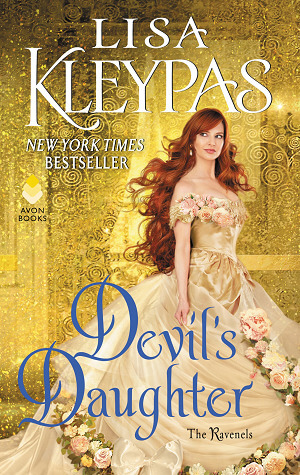 When he was a boy, Henry was sent to boarding school where he was bullied by another boy, West Ravenel. Henry wrote to Phoebe about the misery West inflicted on him, and how West even stole a book Phoebe sent Henry–a book they both cared about very much.

Eventually, Henry’s parents pulled him out of school and he came to live near Phoebe. Their childhood romance led Phoebe to propose to him and despite his misgivings about his health and how Phoebe deserved better, Henry agreed to marry her. She was pregnant with their second child when he passed away due to his wasting disease (in typical romance fashion, this remains a mysterious, unnamed illness).

Now, Phoebe’s brother is about to marry Pandora Ravenel and when Phoebe, her kids, parents and siblings travel to Eversby Priory for the wedding, Phoebe and West meet at last. Phoebe has a mental image of West as a fat slug who harasses the maids but instead he turns out to be an attractive, energetic man to whom she is immediately drawn, even before she learns who he is. Of course, once she realizes he’s the one who made Henry’s life miserable, she is determined to have as little as possible to do with him. But fate keeps throwing them together.

West is attracted to Phoebe from the moment he meets her and he doesn’t have the same enmity toward her that she has toward him but he feels he is no prize. For many years he almost drank himself into an early grave, hurt people and even destroyed a few marriages along the way. But by this point in his life, he’s been sober for two years, having reformed himself on his own.

Now West manages Devon’s estate. He has been very successful at updating the farming methods and the tenants and staff are fond of him. Nevertheless, he is less impressed with his turnaround than everyone else, and even after his childhood bullying of Henry is put to rest between himself and Phoebe, he doesn’t want to inflict himself—not only a man of a lesser social status, but also one whose reputation is forever ruined—on Phoebe and her sons.

Phoebe, too, does not want to fall for West, even as she does. Not only are there the skeletons in his closet to consider, but she made a promise to Henry on his deathbed that presents another obstacle.

I’ve been chomping at the bit for Devil’s Daughter ever since I read the excerpt of its opening, but I really worried that I’d built up my expectations so much that I would be disappointed in the book when I finally read it. Instead, I ended up enjoying it greatly.

I don’t know if the book would be equally satisfying to readers who haven’t followed West’s growth throughout the Ravenel series. I have been following it, though, so I loved him going in. However, here my love for him expanded further. I don’t expect others to agree with me, given the popularity of Derek Craven from Dreaming of You and Sebastian from Devil in Winter, but West is hands down my favorite Kleypas hero.

Perhaps the greatest thing about West is that he reformed himself *before* he met Phoebe. He has matured and grown and owns his past mistakes. And he does this not to win the heroine, but to win himself back.

One of the other things I loved in West was his vitality, which contrasts both with unhealthy man he used to be—eating and drinking too much, leading a lethargic lifestyle—and with Henry, Phoebe’s frail first husband.

West’s interest in farming is grounded in lovely details about his active participation in harvesting and sheep-shearing, his interest in new farming techniques, and the description of the land he cares for. His love of food hasn’t gone away, but now he loves being alive, too.

His symbolic association with growing things, animals and earth highlights this vitality. It is as if, after years of self-destruction and destructive impulses, he’s found the magic of coming to life. And he shares that magic with Phoebe and her kids and brings her alive in a way that she has not been before.

Phoebe is a lovely character, too: keen-witted, strong-willed, and a little afraid of the responses she feels in West’s presence. She is a loving mother to her kids, relaxed with them when it comes to propriety and rules but a little overprotective, too. It is a joy to see her realize slowly that West isn’t entirely the villain she has always thought he was.

Phoebe’s life has become circumscribed due to Henry’s illness and her grief for him, as well as her role of widow and mother to two young boys. With West, she not only comes to life in a new way, but discovers her power to make decisions she put off making in the past. Her role of Henry’s loyal and devoted wife entailed some sacrifices that she made willingly, but in the course of knowing West, she discovers that she doesn’t owe Henry everything, which is nice to see.

I liked Phoebe’s son Justin (Stephen, the baby, was too young to have a big role in the story). Justin was an appealing, sometimes amusing child without being one of those cloyingly sweet romance genre kids. And of course, there is Sebastian, Phoebe’s father, who is better and more witty here than he is in Devil in Winter (I am an outlier in my not-so-great opinion of that book upon rereading it).

Speaking of wit, there was some great repartee in this book, both between West and Phoebe and between other characters as well. Here’s an example of the first, from a scene in which Phoebe is stuck sitting next to West and having to talk to him at dinner.

“I won’t say anything about farming. We can discuss other subjects. I have a vast and complex array of interests.”

Mr. Ravenel considered that. “Never mind, I don’t have a vast array of interests. But I feel like the kind of man who does.”

Amused despite herself, Phoebe smiled reluctantly. “Aside from my children, I have no interests.”

Phoebe did enjoy a man with a sense of humor. Perhaps this dinner wouldn’t be as dreadful as she’d thought. “You’ll be glad to hear, then, that I haven’t read a book in months.”

“I haven’t gone to a classical music concert in years,” he said. “Too many moments of ‘clap here, not there.’ It makes me nervous.”

And here is another example, from a scene in which West and his brother Devon are discussing the preparations for Pandora’s wedding.

“It’s like staging a production at St. James’s Music Hall. Without, sadly, the chorus girls in pink tights.” West drained the rest of his coffee. “My God, will this day never end?”

“It’s only six o’clock in the morning,” Devon pointed out.

“I’ve never thanked you properly for marrying Kathleen at the registrar’s office,” West commented. “I want you to know how much I enjoyed it.”

There are times, when reading romances, when I feel that the only thing binding the characters together is physical attraction and sex. This always makes me feel that something is lacking, but such was not the case with Devil’s Daughter. Here the sex was steamy enough to fog windows, but there was more glue to West and Phoebe’s relationship than that.

I especially loved the way Phoebe and West opened up to each other about their pasts and made themselves vulnerable to one another, the time they spent discussing farming techniques, and West’s playfulness with Phoebe’s children. Here’s a scene in which Justin is riding his hobbyhorse:

“Have you been working already?” Sebastian asked.

“No, I rode out to the east side to have a look at the quarry. We’re mining a rare deposit of hematite ore, and—” Mr. Ravenel paused as he caught sight of Justin ducking behind a settee with the hobbyhorse. Resting most of his weight on one leg in a relaxed stance, he said with feigned regret, “Someone’s let a horse into the house. What a nuisance. Once they’re inside, it’s impossible to get rid of them. I’ll have to tell the housekeeper to set out some traps and bait them with carrots.”

The wooden horse peeked out from behind the top edge of the settee and shook his head.

“Not carrots?” Mr. Ravenel asked, advancing stealthily toward the settee. “What about apples?”

“Plum cakes,” Mr. Ravenel repeated in villainous satisfaction. “A horse’s greatest weakness. Soon he’ll be caught in my trap . . . and then . . .” He dove behind the settee, pouncing on Phoebe’s unseen son.

A shriek tore through the air, followed by a rush of boyish giggles and the sounds of rough-and-tumble play.

I did have a few issues with the book, however. A couple of anachronistic word choices felt out of place.  There was a little more sequel and prequel-baiting than I wanted—it was hard to keep track of the newly introduced Wallflowers’ kids. The only one that stands out is Marcus and Lillian’s oldest daughter, Merritt. She was a fun character—worldly, married, and amusing.

The next two issues (my biggest with the book) fall into huge spoiler territory:

After ending things with Phoebe for reasons I won’t go into, West fell off the wagon. The first time I read the book, I wanted the reasons for this fall to be a little clearer. Without fully understanding them, what happened felt regressive and out-of-character for him. Coming so close to the end of the novel, it made me a touch nervous about West’s ability to stay sober in the future, too.

On subsequent reads, though (yes, I read this book more than once), the reasons for this became clearer and clearer to me and I no longer felt that way. Once I understood West’s motivations better, it all made sense, and I also remained confident in his ability to stay sober in future years.

Another problem is that at the very end, Sebastian took on too strong a role. While I liked the talk he gave West, I felt that West and Phoebe were left in a bit too passive a role when it came to their own happiness. I wanted them to have a stronger and more substantial part in bringing about their reunion, so that the ending would be more triumphant.

After finishing the book the first time, I wrote a review grading it a B+. But three days later, I couldn’t resist picking it up and starting it all over again. Rereading a book so soon after finishing only happens to me rarely. Then I picked it up again. And again.

Even on my second, third and fourth reads, Devil’s Daughter remained a delightful book–sweet, sexy, tender, and romantic. Even the scenes that bothered me the first time around have grown on me. I had to rewrite my review. I’m giving it an A.

→ Janine
Previous article: Open Thread for Readers for March 2019
Next Post: REVIEW: What the Parrot Saw by Darlene Marshall