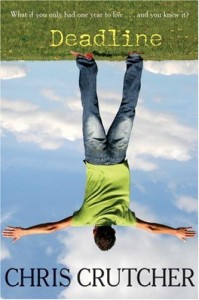 I picked up your book DEADLINE because my middle teenage daughter has a problem sitting still for long enough to read her required books for English, and when she does read them, she needs help absorbing them. She started your book, handed it to me and demanded to know "Is the main character really dying????"
As in she couldn’t believe her eyes. So I opened the book and read.

Yes, the main character is dying. Almost stopped reading right there because my kid-in-jeopardy tolerance is pretty low. But here’s the thing. I couldn’t. You sucked me right in with your easy, sardonic wit and devastating charm coated in a bluntness that as an author myself, I loved. Our hero is Ben Wolf, a pint-sized, eighteen year old who lives in a small town in Idaho. He has big things planned for his senior year, big things that don’t include a fatal blood disease.

But he takes the cards he’s dealt. Because he’s eighteen, he’s allowed to keep his terminal disease a secret from his crazy mother, distanced father and beloved brother. It’s a decision Ben claims to be positive about, but his inner id, whom he affectionately calls Hey-Soos, keeps poking at him with a stick to wake up and smell the roses, because by not telling, he’s living a lie, a lie that will devastate those who love him.

I loved how Ben sticks his head in the sand about this and goes about doing things that he’d never trusted himself to do before. A bucket list for the teenager set if you will. He decides to go out for football, all 123 pounds of him. He decides to try to get laid by the prettiest girl in school — Dallas. He decides to drive his closed-minded teacher crazy. And he decides to help the local drunk become sober.

And shock of all shocks, it turns out that he can play football more than decently, even with his diminutive statue. And the pretty girl, Dallas, is even prettier on the inside, and best of all, she likes him back. And his teacher isn’t so hard to drive crazy after all. And the town drunk appears to be a shockingly normal guy when he’s sober.

Except . . . living with a secret sucks. Especially when his brother wants and needs Ben to go to college with him and continue to interpret his football plays to make him look like a superstar. And Dallas. God, Dallas. Ben falls for her, and falls hard, but even more of a miracle, she falls for him. Which means she’s not the throwaway adventure he’d thought. And he’s leaving. There’s no getting around that. He’s out of here. Off Planet Earth in less than six months. As he begins to understand what his dying is going to do to those who love him, his resolve to keep his secret starts to crumble. Even more unsettling, he’s not the only one with secrets. Big secrets. Life destroying, soul crushing secrets that I’m not going to reveal here and ruin the plot because this is a book worth reading, more than once, if only for the gut wrenching realization that we should live every damn day the best that we can.

Suffice it to say, Mr. Crutcher, you hooked me. You hooked me with how real the teens were depicted, including profanity, fear, sex, everything. You made me care about these characters, about their relationships, and the tangled web they wove. You shocked me, more than once, and that was good. My daughter actually read a whole book, and that in itself is probably the biggest compliment I can pay you. I loved this book, I was both destroyed and enlightened by this book, and look forward to more from you.

Jill Shalvis
When she’s not reading, USA Today bestselling romance author Jill Shalvis is at work on her next novel. INSTANT ATTRACTION is in stores now. See her daily blog for more details, her crazy mountain adventures, and contests.

This book can be purchased in hardcover, trade paperback beginning April 21, 2009. No ebook format found.