WARNING: this review may not be work safe as it includes profanities and sexual situations. Carry on. 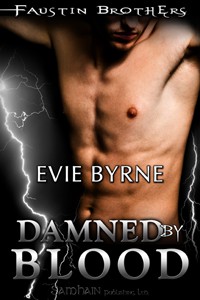 I hadn’t even realized that this book, the third in the Faustin brothers trilogy, was set for release until I received the Samhain reviewer email. I jumped on the chance to obtain a review copy because I had enjoyed Bound by Blood quite a bit.

I thought this was a great, fresh vampire romance. It wasn’t fresh because the vampire myth held anything new. The freshness was totally based on the characters themselves. Mikhail is the eldest of the Faustin brothers. He and his family rule over the East. His mother calls him home to tell him of a prophecy of his mate. It is Alya Adad. I’ll just let the book do the talking:

Helena’s shrill whistle cut through the sludge of noise. Mikhail lifted his head and looked around the room with fresh eyes. In just a few seconds his world had collapsed and been rebuilt in a terrible new form. Helena threw out her arms in frustration. "Excuse me. I’m new here. Could somebody please tell me who this Alya Adad is?"

His father said, "The eldest child of Prince Zouhair Adad of Morocco."

Gregor said, "She’s the fucking queen of the damned."

Mikhail stood. That surprised them all, he could tell, and he hated their worried glances. He cast a long, slow gaze around his family circle, warning them against pity. "You should know her name, Helena. She rules the entire West coast. And we’re at war with her."

Alya has fucked and killed her way to power, just like a man, and she holds it ruthlessly. She earned it the hard way and she isn’t   ever going to give it up, not because Mikhail threatens to destroy her or because of some silly prophecy Mikhail’s mother might have spouted.

She has done her time on her knees and she is not about to submit to Mikhail. She knows what it is to be with a prince and they demand total submission. Some of her princes were kind and some were sadistic but they all preferred her with her neck bowed and her knee bent so even if she has some stirrings of attraction for Mikhail, even if perhaps she might want to bed him, love him, possess him, she won’t.

Mikhail tasted the blood of Alya when they were young and because of that he’s not had another woman who has satisfied him.   Armed with the knowledge that she is his mate, he   has decided to go and claim her; not because of the prophecy but because he acknowledges that he would rather take the chance of dying than living another moment without her.

So often when a warrior heroine is presented to the reader, she ends up declawed by her love for the hero. But in this story, Ayla is never diminished. She remains as merciless and ruthless as ever.

The setup is so perfect. Mikhail recognizes that power to Ayla means being in control at all times. For him, however, power means getting what you want. In this way, Alya and Mikhail can negotiate their relationship without compromise. Of course, getting there is no easy step because Alya, for all her outward power, is scarred from the rejection of her family and the deeds she’s done to get to the top. It’s not that she regrets her actions but she questions whether anyone can truly love her.

Mikhail isn’t into the sex games like Ayla, but again, Mikhail’s sole focus is convincing Ayla that they can be together. Ayla sets out the rules. These aren’t rules that she is making up, just to test Mikhail. They are rules that define her, that provide her succor and safety. She feels like she has earned the right to make these rules.   If there was one area in which I think the book could have used some bulking up was in the exploration of the emotional transition of Ayla and Mikhail. We get a little bit and it’s all well done, but I feel like there definitely could have been more.

There is a suspense element that is added that doesn’t move the plot but serves as a catalyst for Ayla and her complicated feelings toward Mikhail.

There are so many great scenes and lines in this book.

She pointed at the sofa with her knife. He sat, and she stepped between his knees. Drawing her fingernail up the length of his shaft, she said, "Do you have a condom?"

Mikhail stared at her, blank, rendered an idiot by her touch.

She said, "I don’t. I haven’t fucked another vamp in a good ten years."

Her toys couldn’t impregnate her. He could.

"I suppose you came here ready to start breeding."

He snorted. No. Mostly he’d been thinking about survival. But yes, breeding seemed-dandy. Breeding seemed like a fantastic idea. His cock seconded the motion.

"Don’t tell me you don’t carry one? Or do you only do humans, too?"

"I haven’t fucked anyone in ten years, vamp or human."
….

Alya recovered herself and crossed her arms. "So you come to me with my initial tattooed on your chest and ten years of seed stored up in your balls."

"I thought I’d make myself irresistible."

But the book takes you by the throat and doesn’t let go. I will give a warning that Mikhail strikes Ayla. They fight in hand to hand combat. I viewed this as a sign of respect. Ayla was a vampire that held the entire West. Mikhail understood that she was powerful and dangerous and she could kill him. This story never lets up on the intensity. I found it fresh and fabulous. A-

This book can be purchased from Samhain (excerpt link because Samhain’s linkage for upcoming books breaks upon the book’s release) on September 22, 2009, as well as other etailers.