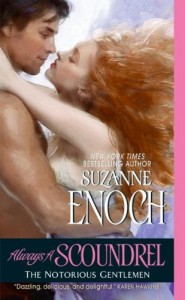 I’ve really enjoyed this Notorious Gentleman series which started with After the Kiss and ends with Always a Scoundrel, a book that csquared deemed one of your best in years. I agree. This is a book that had my emotions in my throat nearly the entire time. It was dark, evocative, and moving.

Lord Bramwell Lowry Johns is the second son of the Duke of Levonzy. He lives off his gambling winnings and his allowance, although, the latter is an unreliable source of income as his father is prone to cutting Bram off regularly. Bram actively courts his father’s disapproval. The two have been at odds since Bram was 16 years old when the Duke told Bram he was a disgrace and Bram set out to prove the Duke correct. He contacted Kingston Gore, the Marquis of Cosgrove, and allowed Cosgrove to lead him down every path of licentiousness. For years and with the tutelage of Cosgrove, Bram has tried to bring disrepute onto the house of Levonzy. His goals were slightly interrupted when his two best friends entered the First Royal Dragoons on the Peninsula and Bram followed them.

Upon the three gentlemen’s return from the war, Bram’s two friends got married and he felt adrift. He found himself back in the company of Lord Cosgrove and doing increasingly reckless things like stealing jewelry from all his father’s friends. One night he finds himself in the home of Lord Abernathy and overhears that Lady Rosamund Davies, Abernathy’s middle daughter, is to be sacrificed to Cosgrove on the altar of matrimony.

Lady Rosamund Davies, daughter of the Earl of Abernathy, lives a quiet life. Her older sister, Beatrice, married well. Her father and mother ignore her and her brother has fallen in with Cosgrove racking up a near insurmountable debt. Rose runs the household efficiently and without complaint.   Cosgrove will cancel the debt if Rose marries him. Initially Rose resists, but what is a young woman to do? She wants to protect her family and recognizes that she’s the only reparation that Cosgrove will accept. It’s either marriage or ruination for the Abernathys.

Something stirs to life in Bram. Perhaps it is because he regrets the man he has become, a man formed by Cosgrove, a man once broken by Cosgrove. Bram is stirred enough to action to offer himself to Rose, not to save her from Cosgrove but to help her save herself.

“I’ve decided to do you a favor,” he said finally, the lazy drawl just touching his voice and stirring down her spine in response.
She folded her hands in front of her. “And what favor is that, pray tell?”
“Kingston Gore will eat you alive,” he returned even more quietly, taking a slow step closer among the milling guests. “Beginning with your honor, and ending with your soul.”
“I-‘”
“I know this, because I fed him mine a very long time ago.”

Bram initially tells Rose to call the arrangement off and tell her family to go to hell. But when she adamantly refuses, Bram agrees to instruct her, to help her in anyway she can, to prepare her for marriage with a monster.

“I don’t like my family,” she whispered as they drew near, “but they are my family. They depend on me. This is how I am required to render my assistance.” As for her private feelings about that circumstance, she wasn’t about to enlighten him.
Slowly he slipped his arm from hers, stopping as she continued to advance. “Then allow me to teach you how to play the game,” he murmured from behind her.

Make no doubt about it, Cosgrove is villainous. He’s attractive and sauve; rich and titled. But he is dark soul and his blackness is revealed slowly and only when directly challenged. His calculation and perceptiveness made him all the more horrible.

“Get away from me,” she rasped.
He leaned closer. “Never,” he whispered. “The thing about hell, my dear, is that the devil hates being alone. You belong to me, just as my horse does. And Bramwell does now as well, I suppose.”
“Go away.”
“The only reason I won’t put you on your back at this moment is that I want us both to appreciate the wait. I know I do.”

Rose learns that self preservation sometimes comes at the cost of not being the martyr; of letting go of the perceived ideas of honor and duty. Conversely, the events of the story force Bram to reconnect with his own family and he is given an opportunity to redress old wrongs. It’s kind of a fascinating dichotomy as if Rose and Bram are at different points on the spectrum of familial duty and honor. Bram’s heroism lies ultimately in his humility and his willingness to do anything, even face his father, to save Rose. Rose then provides the love for Bram that she once lavished on her unworthy family.

While most of the relationship conflict is external, there was still very strong emotional draws as Bram grapples with his redemption and Rose works to extract herself from a horrible future. This was a great reformed rake story because Bram’s decision to go down that dark path was so easily understandable. His father hurt him terribly and Bram spent his whole life trying to repay that hurt. It was easy to see how Bram tried to be a better man when he was with his friends, Phin and Sullivan. But it was also easy to see how a negative and dark influence could take over when his friends had moved on to have wives and families. Rose’s decision to support her family made sense in the context of her life and time period. Perhaps her actions with Bram might have been unusual but faced with the fright of Cosgrove, who wouldn’t have taken any lifeline?

I so enjoyed your Notorious Gentleman series and I can’t wait to see what’s next. A-