Review: A Marvellous Light (The Last Binding #1) by Freya Marske 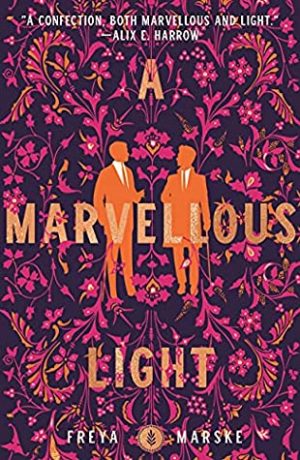 Robin Blyth has more than enough bother in his life. He’s struggling to be a good older brother, a responsible employer, and the harried baronet of a seat gutted by his late parents’ excesses. When an administrative mistake sees him named the civil service liaison to a hidden magical society, he discovers what’s been operating beneath the unextraordinary reality he’s always known.

Now Robin must contend with the beauty and danger of magic, an excruciating deadly curse, and the alarming visions of the future that come with it—not to mention Edwin Courcey, his cold and prickly counterpart in the magical bureaucracy, who clearly wishes Robin were anyone and anywhere else.

Robin’s predecessor has disappeared, and the mystery of what happened to him reveals unsettling truths about the very oldest stories they’ve been told about the land they live on and what binds it. Thrown together and facing unexpected dangers, Robin and Edwin discover a plot that threatens every magician in the British Isles—and a secret that more than one person has already died to keep.

WARNING . The book starts with the detailed scene of magical interrogation under torture and subsequent murder. I considered the torture to be rather graphic. There are two or three shorter scenes of magical torture , not gratuitous , but torture nonetheless.

I don’t know why the publisher decided to sell your book by comparing it with “Red White and Royal Blue”. I can definitely see the comparison with “Jonathan Strange and Mr. Norrell”, but I think “The Magpie Lord” by KJ Charles should have been in that blurb. To me that’s much closer comparison, only because both books feature gay romances in England where magic is an important part of both worlds.

I loved this book. Readers, because of the high grade I am giving this book, I want to stress again, I am an ESL reader and I may not see problems with the language/copy editing which more trained eye will catch. The language worked *perfectly* for me, but it may not work for you and I hate to think that someone will pay this crazy price (fifteen dollars, really publishers?) on my recommendation and may end up hating it. I had been highlighting and highlighting quotes on my kindle. I had not done this with m/m book for months.

Of course even the most wonderful language would not necessarily make me fell in love with the story. As I said this one starts with the horrible murder and then the plot keeps moving and twists and turns just keep coming. I loved that the author threw me in the middle of the interesting world and did not dump all the information on this reader at once. Bits and pieces are shared as needed in the story, I thought that when the author needed to share more details about the settings, she did it at an appropriate time and place. Even a couple of dinner conversations about magic made sense to me.

I thought the building of the romance was mixed very well with action/adventure/ murder mystery storyline. I always say that I love when main characters have things to do and get to know each other when they are doing those things that the story needs them to do to move the plot along. I think this is exactly what happens here – Edwin and Robin get to know each other while they investigate what happened to Robin’s predecessor, but also I think the author managed to keep a delicate balance here.

The plot moves along at a nice pace, but the characters did not feel to me to be pawns of the plot if that makes sense. Their actions drove the plot and I rarely if ever had to question why they behaved the way they did even when I did not know these men too well yet. I loved Robin and Edwin, I also thought they had great chemistry and I believed in their future.

“Robin smiled at him and took his hand away before he could trample on the moment. He wanted to memorize the details of the friendliness. A crinkle at the side of Edwin’s eyes. A softening around the mouth. This was so deeply awkward. Usually one simply knew, when acquaintanceship was turning to friendship.

It wasn’t the kind of thing men discussed at length. Robin had no idea whether Edwin would characterise them as friends; quite possibly not. But all of Robin’s muddled feelings, which had been set on a giant fairground swing during the past two days, now churned and bubbled in his chest and finally announced that they were going to be vocalized, and Robin had a few more seconds to decide exactly how.”

I have to note that this book has several great secondary female characters. I am going to share with you a couple of moments where two of these awesome women are involved in helping our heroes – *do heroic stuff*. I did not feel it was too spoilerish and if in the next books of the trilogy their roles are expanded, oh I certainly won’t be complaining.

“Robin had a swell of fellow-feeling. “We haven’t had much luck at unearthing them. We don’t know how many men—er, or women—are involved.” “They’re men.” “Why do you say that?” “Because if even a single woman was involved, they wouldn’t have decided that a man who’d been working there one day was a more likely source of information than a woman who’d been there for years.””

““Blame me,” said Robin at once. One thick black eyebrow arched. Miss Morrissey leaned forward and smiled at her sister. “Would you say Sir Robert is a threatening figure?””““Er,” said Mrs. Kaur. It was the most diplomatic single syllable Robin had ever heard. “Are you afraid for your maidenly virtue?” “I’m married, Addy,” said Kitty Kaur dryly. “I have none.” She eyed Robin. “He does seem the kind of well-built, pugnacious fellow who would follow through on a threat of bodily harm.” “I beg your pardon,” Robin began to protest, and then the penny dropped. “Oh. Would it help if I raised my voice?””

““Yes, that would do nicely. Sir Robert strong-armed my sister into bringing him here to seek my help, and threatened us with harm unless I abused my access to the lockroom in order to locate Mr. Courcey. Overcome by concern for his friend, of course, but still. Most brutish behaviour.” “And we are but feeble women,” said Miss Morrissey. “Woe.” “Your sister is a magician,” Robin said, pointing out what seemed the largest hole in this story. “Woe,” said Mrs. Kaur firmly, and Robin recalled what Miss Morrissey had said about the assumptions made by men.”

I have read that this is the first book of the trilogy. The ending is not a cliffhanger. I am going to inject my mandatory fear of stretching out a good plot into too many books, but I guess I have to trust the author.