REVIEW: A Countess Below Stairs by Eva Ibbotson

When Azteclady asked me to review one of your romances, I was both excited and challenged. You pack so many irresistible characters into less than three hundred pages that it is difficult to do justice to these delightful folk. And how would I explain the magic by which you can take me from a lump in the throat to tears of laughter in the space of a few sentences? And yet, how could I refuse? Your books are the meringue kisses of romance novels: simple and sophisticated at once; rich and sweet and awfully charming. 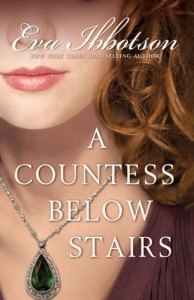 A Countess Below Stairs is no exception. The story takes place in 1919 and centers, as much as it does, on Anna Grazinsky, a Russian Countess. As a child, Anna is a joy to her parents, and though they shower her with gifts, she is so tenderhearted that she never becomes spoiled. Her father calls her his “little star,” but when he is killed in World War I, Anna’s heart, as well as her mother’s and her younger brother’s, are broken.

The family is dispossessed of their fortune when the servant to whom they’ve entrusted their famous jewels disappears. They undertake an arduous journey to England and there they are reunited with Anna’s old governess, Miss Pinfold. While an old friend of Anna’s father agrees to pay young Petya’s school fees, Anna refuses to accept more help from him, and rather than impinge on Miss Pinfold’s kindness, she takes a position as an under-housemaid in a Wiltshire property called Mersham.

Once she had prowled the great rooms, eagle eyed for a speck of dust or an unplumped cushion, and had conducted inquests and vendettas from which ashen underlings fled weeping to their attics.

As for the butler:

…Proom, like Mrs. Brassenthwaite, had once been head of a great line of perfectly drilled retainers: under-butlers and footmen, lamp boys and odd men, stretching away from him in obsequiousness and unimportance.

The war, however, has changed all that, and softened Proom and Mrs. Brassenthwaite. The paragraph describing how this came about was one of many which moved me deeply:

More than most great houses, Mersham had given its life’s blood to the Kaiser’s war. Upstairs it had taken Lord George, the heir, who fell at Ypres six months after his father, the sixth earl, succumbed to a second heart attack. Below stairs it had drained away almost every able-bodied man and few of those who left were destined to return. A groom had fallen on the Somme, an under-gardener at Jutland; the hall boy, who had lied about his age, was blown up at Verdun a week before his eighteenth birthday.

Many of the maids, too, have left Mersham to work in offices and factories during the war. And so, the house has lost its splendor if not its charm, and the servants have now begun to wonder, if, like many of England’s once sumptuous properties, Mersham will be sold.

For the whole hope of the House of Frayne now lay in the one surviving son, Lord George’s younger brother, Rupert. The new earl had spent four years in the Royal Flying Corps, his life so perilous that even his mother had not dared to hope he might be spared. But though his plane had been shot down, though he’d been gravely wounded, Rupert was alive. He was about to be discharged from the hospital. He was coming home.

But for good? Or only long enough to put his home on the market? Remembering the quiet, unassuming boy, so different from his handsome, careless elder brother, the servants could only wonder and wait.

It’s at this point that Anna arrives in Mersham, having been sent there by an agency. Proom and Mrs. Brassenthwaite can tell almost at once that she is a lady — her curtsies resemble a ballerina’s — but since Mersham is desperately in need of more staff, they decide to give her a try.

At Mersham, Anna is introduced to a community. Besides Proom and Mrs. Brassenthwaite, there is Mrs. Park, the gentle and unassuming cook; Win, her simple-minded helper; James, the bodybuilding footman whom the maids love to ogle; Louise, the crotchety head housemaid; Lady Westerholme, the Earl’s mother, who has been much given to consulting ouija boards since the death of her husband and son, and the earl’s elderly uncle, Sebastian Frayne, who loves classical music and pretty women in a maids’ uniforms.

To everyone’s surprise, Anna turns out to be diligent worker. Since, as Proom later explains, what a servant dreads most is boredom, and Anna is anything but dull, she manages to gain acceptance among the other servants, too.

Meanwhile, Rupert Frayne, the new Earl of Westerholme, has just become engaged. Muriel Hardwicke is a beautiful heiress who tended Rupert as a nurse at the hospital during his convalescence. Before his brother George’s death, Rupert promised that should anything happen to George, and should he become the earl, he would do everything possible to save Mersham from being sold so that the servants would not lose their positions. Now that George is gone, Rupert, who once dreamed of traveling the world on archeological expeditions, realizes that he must fulfill his last promise to his brother.

Not only is Muriel fabulously rich, she is also breathtakingly lovely and Rupert admires her no-nonsense manner and her wartime volunteering to tend the wounded as a nurse. He does not realize that Muriel undertook that task with the goal of snagging a titled aristocrat. Nor does he know that Muriel is a devotee of Dr. Lightbody, a lecturer who believes in eugenics as the process by which to improve mankind.

Therefore, Rupert is nothing but chagrined when, shortly after his return to Mersham, he realizes he is drawn to the new under-housemaid who curtsies like a ballerina; whom Baskerville, his mastiff, has fallen in love with; and whose gentleness can make the nightmares of his wartime plane crash fade away.

It is not long before Muriel, too, arrives in Mersham, and while she is too arrogant to realize that Anna could displace her in Rupert’s affections, it does not take her much time to make everyone, from the sweet-natured cook to the Jewish neighbors to Rupert’s best friend’s young sister, miserable.

Rupert is smart enough to realize this, but he is honor-bound by his promise to his dead brother to go through with marrying Muriel. And so, Anna must work hard on the preparations for the wedding of a man she is gradually falling in love with.

A Countess Below Stairs is a kind of children’s story for adults. Like the castle in Sleeping Beauty, Mersham has been neglected and waits for true love to restore it to its former glory. Like Sarah Crewe, the heroine of Frances Hodgson Burnett’s A Little Princess, Anna does not allow her fall from her elevated position to change her generous heart, and eventually, she is rewarded for her kindness. How Anna, Rupert, and the servants of Mersham all arrive at their happy ending, I will not reveal, but we know all along that some way, somehow, everyone will get what they deserve.

And yet, for all that, and for all that there are no sex scenes in the book, there is a sophistication to the language, to the unexpected plot twists, to the gentle humor and to the continental sensibility that makes it clear that this book is intended for grown ups, albeit ones who have not outgrown a love of fairy tales.

In the hands of a lesser writer, a heroine as good-hearted as Anna could have been dull, but you make her delightful. A hero like Rupert, tied to the scheming Muriel, might have lacked strength, but nothing is further from the case here, and Rupert proves to be far more heroic than most.

The supporting characters also shine, like rays of sunlight refracted through the prism of your words. You can sketch a personality or a relationship and fill it with dimension in just a few sentences. For example, here is this description of the reaction of Rupert’s neighbor, Lord Byrne, to his wife’s request that he wear a costume for a “fancy dress” ball:

Lord Byrne looked at his wife. He had married her blind, knowing nothing about her except that she had a quiet voice, a sensible manner and some spare cash. Now, eight years later, he would have died for her without a second’s hesitation. To dress up as a hussar in Wellington’s army would be harder, but he would do it.

It is on a note of gratitude for paragraphs like the ones I’ve quoted here that I’d like to close this letter. Thank you for bringing me such joy and delight, and for writing such heartwarming stories.

PS A for this one, if you haven’t guessed.