REVIEW: King of the Last Days by Diana Norman

“The cowled figures which stood around the open grave in the moonlight at Glastonbury in the year 1189 were used to mystery but even they were overawed by what was in the coffin.

Their great and ancient monastery was in trouble and if this sword was what they thought it was, if those bones were really Arthur’s, then they had a great relic for which their king would be properly grateful.

But their king was in France, fighting his son, Richard Coeur de Lion, and getting the sword to him would be a perilous business. A lot of people wanted that sword for a lot of reasons.

The young monk who takes it for them is unobtrusive enough but, as rumour of what he is carrying spreads, he is in danger. The companions he picks up on the way, a formidable Prioress, a Crusader haunted by the massacre in the Holy Land, may be trustworthy, or they may not.

The king they are seeking, Henry II, is sick so they are not only evading enemies, they are also in a race against time.

Why, oh why are most of your books not still in print? Trees die daily for Cassie Edwards and Connie Mason but not for an author who truly deserves to be read by more people. Life sucks, ‘eh? The only way I knew this book existed was because it was listed at Amazon.co.uk as out of print. I knew nothing else about it as there was no back blurb or reviews. So when I found it listed by an English bookseller, I took the plunge, crossed my fingers, whipped out my credit card and hoped for the best. 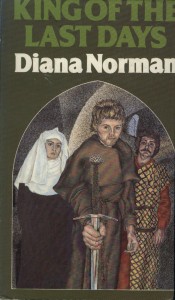 Since most of the books we review here are romance, let me say up front, this is not a romance. All of the your other books I’ve read so far have romances in them but not this one. What readers do get is a great view of medieval life, especially from the POV of the religious community and the peasants. All three main characters have deep feelings about Henry II and, especially for the Prioress and monk, the law he instituted (which serves as the backbone of English Common Law). There is enough period detail to set it firmly in medieval times but not enough truly gross details to ick me out.

You refrain from inventing over melodramatic backstories or forcing nonessential subplots into the story so it’s short (189 pages) but still rich in the tale you’re trying to tell. I still blush and/or shudder to think what I paid for this book but I have to say that it was worth it. “King of the Last Days” is yet another reason I’m thankful you’re an author.