What can I say but “wow.” No, I guess “Wow!” would be a better way to phrase it. You’ve created a stunning new world with vivid characters, action and scenery. My colleague Jane has already filled our readers in on the plot so I’ll head straight into my thoughts on various aspects of the story. 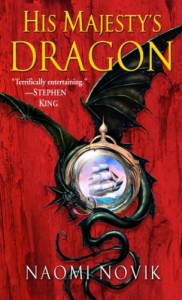 I really enjoyed how you filled us in on the backstory without dropping it in huge chunks on our heads. I never felt lost or confused nor got bored wading through masses of information at one time. I loved the various names for the dragon breeds and how they were just as important as individual characters with their own quirks and charms. Temerarie is wonderful but I’m glad you made him a bit mulish about flying endless flight patterns and smug about his beautiful new breast collar. We’re none of us perfect, right?

I do agree with many readers that you’ve developed a wonderful air equivalent to the many Napoleonic Naval series in print. Laurence is a man to whom honor and duty are more important than his life, even if he does sometimes have trouble adequately conveying their importance to his dragon partner. ;) I also liked the fact that you made both Laurence and Temerarie outsiders in the new world they inhabit and that each has to earn respect. And you’ve melded your world seamlessly into historic fact. Brava!

I’m also intrigued by the fact thatonly women can bond with a certain dragon breed.This certainly adds a new flavor to this type of series and is one I applaud. I was laughing when Captain Roland explained just what England might be asking of him as his duty in about 10 years. You also had me weepingat the sad fate of poor little Levitus. He was such a lovely character and I was cheering for him to have a better outcome. I suppose this means that asshole Rankin will appear to cause trouble at a later point?

I am taking a few points off because of all the time spent on the training. That slowed the story down too much and in the end, I saw very little of the training in evidence in the battle sequences. Maybe it will play into future books. But still this one earns a solid A- grade from me and the hope that we will be treated to more than three books in this series.

Jane thought it was an A too.

→ Jayne
Previous article: REVIEW: Hope’s Captive by Kate Lyon
Next Post: REVIEW: A Kiss to Die For by Claudia Dain