The following guest review/letter comes from author Jenyfer Matthews whose latest release, One Crazy Summer, is available in ebook form. 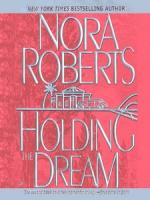 The nicest thing my ex-SIL ever did was introduce me to Nora Roberts books. She gave me a box of her castoffs with the warning that they were formulaic but fun. Included in the box was Holding the Dream, the second of the "Dream" trilogy, published in 1997.

If they are formulaic, it’s a formula that works. The Dream trilogy is the story of Margo, Kate and Laura – three women bound not by blood but by upbringing, friendship, and love. Each of them had achieved the dreams of their youths, only to find their present world rocked by scandals. Now each of them has to find a way to survive, a new path, and in the process a new dream.

From the back cover:

Surrounded by the sweeping cliffs and beauty of Big Sur, Kate Powell treasured her life at Templeton House-and the family who raised her like one of their own. Although Kate lacked Margo’s beauty and Laura’s elegance, she knew she had something they would never possess – a shrewd head for business. Driven by ambition, Kate measured her life’s success with each soaring promotion. But now faced with professional impropriety, Kate is forced to look deep within herself – only to find something missing in her life-and in her heart.

Perhaps because I read the second book in this series first it has always been my favorite. Or maybe it’s because Kate is no typical romance heroine. She’s hard-working and driven and seems like someone you might meet the next time you need your taxes done.

Nora Roberts paints vivid pictures of her characters, but not by simply telling us how they look. Instead we get to see them through the eyes of other characters. In Holding the Dream, the hero Byron isn’t bowled over by Kate at first sight, but he is intrigued:

"I assumed you were cold, prim, rude, annoying, and self-involved. I’m not ordinarily that far wrong with people."

She jerked the ribbon into a knot, snipped off the ends. "You’re not this time, either. Except for the prim."

"No, the rude and annoying probably stick, but I’ve been reevaluating the rest."

She was flushed and rumpled. Her short hair stood in spikes, those long, slim legs pale gold beneath the hem of his shirt. She had no figure to speak of, was more bone than curve. The little mascara she’d bothered with was smudged under her eyes. Her nose was crooked. Had he noticed that before? The nose was slightly off center, and her mouth was certainly too wide for that narrow face.

"You’re not beautiful," he said in a quiet statement that made her brow knit. "Why do you look beautiful when you’re not?"

"How much of that wine did you drink, De Witt?"

"Your face is wrong." As if to prove it to himself, he came around the counter for a closer look. "It’s like whoever put it together used a couple of spare parts from someone else’s."

"This is all very fascinating," she said impatiently, "But-"

"At first glance your body looks like it belongs to a teenage boy, all arms and legs."

"Thank you very much, Mr. Universe. Have you finished your unsolicited critique of my looks?"

"This is a novel way to seduce me."

It certainly seduced me. I not only found and devoured the remaining two books in this series but embarked on what has been a decade-long Nora Roberts addiction.

The story is pure Roberts with just the right blend of believable conflicts and obstacles to success – no willful misunderstandings or contrived plot twists in sight. Though there is an overall storyline that ties all three of these books together, each has a satisfying resolution of its own. Can anyone really find fault with Nora Roberts writing? If so, it’s not me. Nora Roberts has become the ideal to which I aspire in my own writing, particularly with regard to characterization. There is nothing cookie cutter about her characters – each is fully developed and rich and when I close the book on the last page, I typically feel as if I’ve said goodbye to good friends.

Perhaps that’s why I’ve carried this book across the world with me from my ex-SIL’s garage in North Carolina to Egypt. I never have been good at saying goodbye.

Do you have a favorite book? Would you like to share that with Dear Author? Send your review to jane at dearauthor.com. Every Monday we share books that we love to inspire more reading.