Friday Film Review: A Room with a View

A Room with a View (1985)
Genre: Romance/Drama/literary adaptation
Grade: A 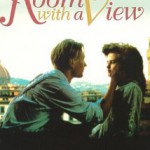 This is one of those movies I knew immediately was destined to be among my favorites. I remember having my sister tape it for me then, after watching it for the first time, immediately rewinding the tape to watch it again. Now, over twenty years later, I still love it to pieces.

Miss Lucy Honeychurch (Helena Bonham Carter) and her older cousin-chaperone Charlotte Bartlett (Maggie Smith) are dismayed when they arrive at a pensione in Florence, Italy and discover that they won’t have the rooms with views of the Arno they were promised. Over the course of dinner that evening, Charlotte – in her usual fashion – makes a fuss causing an older man, Mr. Emerson (Denholm Elliot), and his son George (Julian Sands) to offer their rooms in exchange – something considered indelicate by several of the women present. But Lucy wants her view and persuades their new vicar Mr. Beebe (Simon Callow), who happens to also be there, to intercede with Charlotte and the switch is made. It soon becomes obvious that George, something of a free thinker as is his father, is falling in love with Lucy and after he steals a kiss during an outing to the countryside, Lucy and Charlotte pack up and head for home.

Once there, Lucy becomes engaged to Mr. Cecil Vyse (Daniel Day-Lewis) of London who is something of a repressed snob. To score a petty victory over a local landowner he despises, Cecil recommends the Emersons, who he doesn’t even really know, as tenants for a vacant house in the area all without realizing the events which occurred in Florence. As George takes the opportunity to press his love, will Lucy admit her feelings and follow her heart or will she remain safe with a man she obviously doesn’t care for?

The first thing about this film I noticed was the music. From the opening credits with the glorious “O mio babbino caro” sung by Kiri te Kanawa, musically the film is a treat. After listening to that plus “Chi il bel sogno di Doretta,” I knew I had to have the soundtrack – which I went out and bought and have enjoyed over the years. I also love the use of the chapter titles to divide the film into sections and the artwork which opens the film and is interspersed throughout. In the commentary, Ismail Merchant reveals he initially wasn’t crazy about it but I’ve always found that the Florentine artwork fits perfectly.

The cast is fabulous. Judi Dench is delicious as the overly florid female novelist Eleanor Lavish and Rosemary Leach shines as Lucy’s exasperated mother who isn’t too sure of Cecil yet makes sure Charlotte is invited for a visit while the plumbers tear up her house. Fabia Drake and Joan Henley are sweet as the Miss Alan sisters and then newcomer
Rupert Graves catches the eye as Lucy’s younger brother, and also sometimes the cause of his mother’s exasperation, Freddy. Bonham Carter – with her amazing mass of hair – carries most of the movie and has real chemistry with the intense Sands while Callow manages a fine performance that doesn’t exactly stand out in this crowd yet which never puts a foot wrong. The performance by Day-Lewis is so mercurially wonderful that I once had to convince someone, who was more used to him in LotM, that he was even in the film.

Yet for me, the real stars of the film are Elliot, who conveys the new thinking, which many of the others find tacky, but who never comes off as crass while doing so and Smith who manages to show Charlotte as a passive aggressive spinster (“Poor Charlotte”) without making us eventually hate her. We even see the hints of the young woman in love she once was and realize that all along she’s thrilled at the romance Lucy experiences.

The cinematography is divine both in Florence and in England. Listen to the commentary to find out what Merchant and Ivory had to go through to secure the location filming in the first place and then after that how hard they still had to work to get the actual film footage. Pasta lunches, crowd control, schmoozing up to the Vatican and sharing a location with communist speakers are some of the things they had to do in the name of art. But what shots they got for their troubles. Watch for one overhead scene in the Basilica di Santa Croce which almost looks like a tennis match.

The costumes, which the actors seem entirely at home in, are also perfect as is Bonham Carter’s mastery of the piano pieces she needed to be able to fake for the film. The script is marvelous and conveys the dilemma faced by Lucy as she grapples with her heart’s desire vs the social mores of the time while still remaining humorous and entertaining. For Lucy must choose between her restricted upper-class life and the freeing new world represented by the Emersons. As her mother tries to convey to Freddy, there is a right sort and a wrong sort and Lucy must decide who falls into which category for her.

This is a smart, intelligent film which takes its time but which never wastes time nor makes me look at my watch to see how much time is still left. It flows effortlessly for me and before I know it, I’ve reached the scene which is depicted on the cover and that shows which man Lucy has picked. This isn’t a stuffy, period drama. It’s light, romantic and fun. It’s a favorite of mine for years and one I’d recommend in a heartbeat.