I hope this letter gets to you as I do not see that you are publishing any longer. Or it may be that you are publishing under a different name. Your book was recommended to me after I had finished reading Almost a Gentleman by Pam Rosenthal. I had expressed dissatisfaction at how certain parts of AAG played out. I wanted to see more of how the masquerade affected the lives of the participants. Teller of Tales is AAG only much, much better. 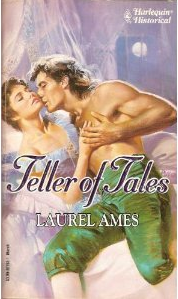 Jenner Page was raped as a young girl. She became pregnant and subsequently lost her baby rendering her incapable of having children. Based upon those two factors, Jenner was simply not marriagable material. She was allowed to go her own path. This lack of coddling made Jenner self reliant and very different than the average Regency female. When she was on the way to London, disguised as a male, she was nearly run over by a carriage driven by Lacey Raines.

Let me stop here for a moment and let me tell you how genius it was for you to provide Jenner with the manly name and Lacey with the feminine name. It never stopped failed to remind me of the role reversal game Jenner was playing.

Lacey is rake and not a faux one. He has engaged in well publicized affairs and scandalous activities such as living with his mistresses. He is bored with his life and the only thing that truly provides him pleasure is thumbing his nose at society. Which, of course, makes him a darling within society. But Lacey is also a man who doesn’t always get what he wants. At every turn, it seems that he is being rebuffed. His suit for marriage is scorned by his intended because of his reputation. Lacey wants to be loved and when he meets Jenner, his ennui is momentarily abated and his thirst for real affection is met.

Lacey ensconces Jenner in his home because of the injuries Lacey caused. Soon after, Lacey discovers that Jenner is actually a woman. Instead of sending her home, Lacey finds that he is further engaged by Jenner and decides to squire her around town in her male garb. The trouble is that Lacey and Jenner have a hard time disguising their growing feelings for each other. Compounding the fact that they are falling in love is the arrival of Lacey’s family.

The masquerade is not simply a plot device to allow Lacey and Jenner to be intimate together. It is the raison d’ etre of the book. The whole story deals with demasking: the risks and the rewards, the demasking of each character both literally and figuratively. At one point, Lacey notes that despite the fact that Jenner is the one that is physically disguised, it is Lacey who is constantly wearing the mask. This wasn’t just a good read. It’s a really well written book.

As Lacey and Jenner fall deeper for each other, the web of deceit that they created actually prevents them from being together forever. Jenner feels she must leave Lacey before the masquerade is unveiled. Lacey has learned to appreciate life, to love his family, to be better emotionally. Jenner cannot allow him to lose that again. Lacey, on the other hand, is distraught at the idea of Jenner not being part of his life. Packed into this small volume is a wealth of emotions and I felt empowered at the end when the two of them reached their happy ever after.

This book is out of print but can be purchased used