Sunita’s Best of 2010 Reviews: The Winter Sea, by Susanna Kearsley

For the last two or three years readers have been recommending your novels, but they've haven't been easily available in the US. So when I saw that one of them was being published here, I jumped at the chance to read it. The Winter Sea is difficult to slot into a romance sub-genre. It has a contemporary storyline which alternates by chapters with a romance plot set in Scotland in the early 18th century. The present-day story is written from first person POV, the characters discuss the historical story, and the narrator of the contemporary is strongly affected by the history. But the historical story stands completely on its own as a separate narrative, and the 18th-century characters have no awareness of what is going on in the present day. It is a long novel, and readers who feel shortchanged by today’s shorter word counts will be in heaven; we really get two novels for the price of one. Both stories are well worth reading on their own, but the way they are woven together sets this book apart and elevates it to something really special. 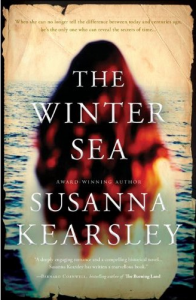 Carolyn McLelland is a Canadian author of historical novels who has four best-selling books to her credit. Her success has allowed her to go wherever she needs for research, and she spends her concentrated writing time in places that bear on her story. Her latest WIP is about the failed Jacobite uprising of 1708, and she has spent five frustrating months in France, writing about one of the participants and locating the narrative at the palace where James (the Old Pretender) spent his exile and plotted his return to Scotland. But the novel is not working, and when Carrie goes to northern Scotland to stand godmother to her agent and friend’s newborn son, she impulsively stops by Slains, a ruined castle on the North Sea coast which figured prominently in the unsuccessful rebellion. She is strongly drawn to the castle and the area around it, and she decides to take a cottage in the adjacent town, Cruden Bay, and shift the setting there. Since it is winter, she is able to find a small cottage, whose owner, Jimmy Keith, is a knowledgeable native of the area and who has two handsome sons who visit him regularly.

The contemporary story traces Carrie’s experiences in writing the novel and her developing romance with Jimmy’s elder son Graeme. For the first time, Carrie discovers that her inspiration comes from more than her own imagination and her considerable research talents. She finds her dreams are filled with characters, scenes, and plot developments. And when she follows up on these leads, she finds that her research confirms them to be factually correct. Sophia, the new character Carrie believed she invented, is her ancestor. Carrie comes up with the correct names of characters and ships even though she has no memory of reading about them.

This approach is a neat inversion of the usual process of writing a historical novel, where the author begins with factual material and then uses it to build a fictional account. Here, what Carrie thinks she is inventing turns out to be historically accurate. The way in which you explain this phenomenon draws cleverly on both scientific and speculative accounts. I really enjoyed your depiction of Carrie’s research process; you show how much careful empirical research can go into a work of fiction, and Carrie’s struggle at the end of the novel between being true to the characters and writing a more conventional happy ending was insightful. There is quite a bit of historical detail in the book, but I think it will give immense satisfaction to those who prefer their novels historically rich without overwhelming less historically inclined readers.

The romance between Carrie and Graeme is subtle and relatively understated. There is no big conflict keeping them apart; the only real obstacle is Graeme’s even handsomer and more flirtatious brother’s Stuart’s belief that Carrie will fall for him. But the reader knows he’s wrong for Carrie from the beginning, when she is physically attracted to Graeme immediately and fails to connect with Stewart despite his best effort. The nail in the coffin comes in Chapter 11, when Graeme drily tells Carrie,

"You'll excuse my brother. His appreciation of our country's past begins and ends with Braveheart.'

Graeme, a lecturer in history at Aberdeen University, is clearly a much better match. But even without any sturm und drang, the relationship is satisfying. Carrie is attracted to Graeme from the first time she sees, him, and at 31, we can believe she knows her own mind.

Indeed, the relatively peaceful arc of Carrie and Graeme’s relationship comes as something of a relief when compared to the historical plot and romance. In this second narrative, Sophia Paterson, journeys from southwestern Scotland to Slains castle after the death of her stern and unloving uncle. She is accepted and welcomed into a warm and loving household, but Slains is also a place in which intrigues abound. The Countess, who was a kinswoman of Sophia’s uncle, and her son the Earl are Jacobites who are slowly revealed to be involved in the planning for the rebellion. Slains continually hosts visitors who are part of the intrigues, as well as visitors who may be spies for the English, and its position on the coast and the configuration of Cruden Bay make it an ideal landing place for Jacobites traveling to and from France.

One of these visitors is John Moray, a young officer who is with the King’s forces in France. Sophia and John are instantly drawn to each other, just as Carrie and Graeme are, and the two relationships parallel each other, with and without Carrie’s authorial interventions. (The relationships are revealed to be even more closely related in the end of the book.)

The modern-day romance faces few obstacles, but the historical relationship is fraught with uncertainty and danger, even though the hero and heroine are sure of their feelings. John’s role in the rebellion and the English bounty on his head make his security precarious, as the rebellion takes shape Sophia is also put at risk. As I was reading, I was genuinely uncertain that their romance would end happily, even though I knew the book was marketed as a romance. And the way you brought it about was ingenious; cleverer readers will guess the outcome more quickly, but I didn't see the resolution coming until you revealed it.

And make no mistake, this *is* a romance novel. Although there are not one but two plots which are distinct from the romantic story arcs, the romantic relationships share the spotlight with their respective plots, and the romances are propelled forward and shaped by what the characters are going through. I loved the way the two romances were intertwined, as well. Although each of the storylines can stand on its own, the reading experience is enhanced by the way they play off each other. Sometimes the relationship is a bit eerie, such as the times Carrie knows names and events because they have come to her as part of the story. And sometimes it is humorous, such as when she was angry at Graeme and wanted John Moray to stop resembling him.

I cannot close a review of this novel without talking about the writing style and the language. This is a beautifully written book. The tone of the modern-day romance reminds me of Mary Stewart at her best. Carrie is a smart, self-aware, self-deprecating narrator whose voice beautifully conveys what it is like to be an author who loves what she does. She doesn't underrate herself, but she has little arrogance, and when she falls in love with Graeme and discovers that he returns her feelings, her surprised pleasure at finding a fulfilling relationship when she least expected it rang so true to me. You effectively switch styles between the modern and the historical narrative; the latter is written in a slightly more formal language which suits the period, but it doesn't clash with the informality of the former. There is quite a bit of Scots dialect, including Doric, but I didn't throw the book down when I encountered it (which is my normal practice when reading historical romances set in Ochlassieland). I don't have the expertise to vouch for the authenticity of the language, but it sounded as if it belonged.

This is a book to be read carefully and savored. The contemporary and historical contexts are carefully delineated and rich with texture and detail without overwhelming the reader. The Winter Sea spans the boundary of historical fiction and historical romance, readers who enjoy both subgenres will find it richly rewarding.