Sunita’s Best of 2010 Review: Emily and the Dark Angel by Jo Beverley

In the spirit of better-late-than-never reviews, here is one of my favorite books of 2010.

Before there were Mallorens, before there were Rogues, there was the Daffodil Dandy. You are justly renowned for your ability to create a fully realized world inhabited by characters across multiple books, but readers who love your historicals are not always familiar with the Regency world you created in the 1980s and 1990s. Linked together by the inscrutable, yellow-clad character of Kevin Renfrew, your early Regencies conform to the standards of the genre but invest the characters and the setting with a depth and richness which few other authors and series have been able to match. The books were published in hardcover and are available in some public libraries, but used paperback copies can be hard to find and expensive, so when I heard that the six novels in the series were being reissued in trade paper and ebook formats, I was thrilled. The reissues began in 2008 with a 2-in-1 edition entitled Lovers and Ladies, which comprised The Fortune Hunter and Deirdre and Don Juan. In 2009 Lord Wraybourne’s Betrothed, the first of the series, was reissued, and then in 2010 the last three reissues were released, culminating with Emily and the Dark Angel in October. While Deirdre and Don Juan is probably my favorite of the set, Emily and the Dark Angel is arguably the strongest novel of the six, although I encourage fans of your other work and of Regency trads to read all of them, in order, and to hunt out a copy of the short story in the series, “If Fancy Be the Food Of Love”. 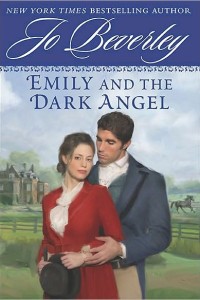 Emily and the Dark Angel is set in Melton Mowbray, the famous seat of English fox hunting and the home of the Quorn Hunt. Emily Grantwich is trying to keep the family estate together under trying circumstances. Her father is an invalid, suffering injuries in a misguided, tragicomic duel with a neighbor, and her brother, the heir, is missing in battle during the Napoleonic War. When the estate of said neighbor is inherited by Piers Verderan, a rake known as the Dark Angel, Emily is repeatedly thrown into contact with him despite the warnings and fears of her friends and family. Verderan, a jaded sophisticate, has come to examine his recent inheritance, whose situation in the heart of the Quorn makes it immediately appealing despite its dilapidated condition.

The plot is deceptively simple. Aging spinster meets rake, opposites attract, spinster tries to keep estate from falling apart, people and events from rake’s past reappear in the present, and the course of true love is eventually smoothed out after a series of bumps. But while the plot and context are drawn from familiar Regency traditions, the characterizations, relationship, and context are beautifully imagined and presented. Emily is an unmarried, inexperienced, unsophisticated woman in her 20s, but she is also intelligent and quick-witted. Verderan, or Ver, is a real rake, not a fake one. He is sophisticated and ruthless, and rumors about his youthful peccadilloes swirl. But he is also intelligent, sensitive, and surprisingly patient with both his young relatives and with Emily. By the end of the novel he is still the rake we met at the beginning, but we understand how he came to be the person he is, and we can see how marriage to Emily will soften some of the hard edges even as he retains his acerbity and sophistication.

Emily and Verderan make a wonderful match, even though they are drawn to each other somewhat unwillingly. Their interactions are by turns funny, sexy, and serious. The book observes the trad norms of avoiding explicit sexuality, but you convey the sensuality of their relationship and others, very clearly. And Emily and Ver don’t engage in the annoying banter that passes for wit in so many novels today. They spar, and their dialogue reflects their intelligence, but it feels like conversation real people would have.

“You must consider yourself fortunate, Miss Grantwich, to live in the heart of the Shires."

Emily focussed again on the road. "On the contrary, sir. The recent passion for hunting is very disruptive. As I have no taste for the chase, I get no benefit from the hullabaloo and a great deal of bother from the hunt charging across our land."

Maliciously she said, "As my father is an invalid and my brother has been missing in action for four months, I think their interest in hunting down foxes is limited." Emily was immediately ashamed of herself. His arrogance was no excuse for her to be positively catty.

She swivelled her head up again and saw a trace of disdain which she knew she deserved. Quickly she said, "I do apologize. There's nothing civilized you can say to such an announcement, is there? I can only excuse myself as being out of sorts after …" Emily found she could not think of a way to describe the recent contretemps.

His lips twitched with what appeared to be genuine amusement. "After being barrelled into," he offered. "Screeched at by a lady of obviously loose morals and drowned in revolting Poudre de Violettes? A powerful excuse for any incivility, I assure you."

Emily’s home circumstances are sympathetically and realistically depicted. Her father chafes at her assumption of control, and she finds it difficult as a single woman to conduct the business necessary to maintain the estate. She is clearly very competent, but she is constrained by the restrictions placed on her, and while she has no desire to marry her worthy but annoying and boring suitor, she knows how limited her life will be if she does not.

Verderan is a wonderful hero. His rakishness is real, his estrangement from his mother and home in Ireland understandable, and his reluctance to acknowledge his attraction to such an unlikely romantic object fun to read. When he falls, and falls hard, it’s very satisfying. The final scenes, fittingly set at the hunt, do both Emily and Verderan justice.

No review of a Jo Beverley book would be complete without a discussion of the context. This book is the penultimate book of a series, and characters from the rest of the books play major roles in it. But in your books the supporting characters never feel like series bait. There is no schoolboy organization to tie the characters together; rather, they are either related or have grown up together. You have stated in discussions of your work that you aim to create a world, and this book is an excellent example of what you mean by that. Our main characters are members of communities embedded in the larger society. They don’t exist in isolation, and their actions affect many others around them. Even Verderan, who has cut himself off from his immediate family, is enmeshed in social relationships.

The fictional world of these young people is located in the larger, real-life world of Melton and the hunting culture. While I’ve read any number of books which namecheck Melton Mowbray, Assheton Smith, and Leicestershire hunting boxes, I’ve never read one with a more fully realized depiction of that world. You weave real-life characters, such as George Osbaldeston, together with your fictional creations seamlessly. As a reader who focuses on context as closely as I do relationships and characterizations, I think this world is as successfully realized as any historical romance, especially given genre and space constraints.

The Regency trad genre has almost disappeared today, although there are a number of good authors writing somewhat related books. But for readers who miss the trad format, or who want a romance that focuses primarily on the hero and heroine and the world in which they live, and who don’t mind a book which foregoes explicit sex but retains subtle sensuality, Emily and the Dark Angel is a must read.