Uncommon Passion is easily the best book you’ve written. The novel takes the strengths of your earlier works–strong characters, sensual sex scenes, believable redemption–and expands on them. Everything works: the lovers, their back-stories, the setting, the passage of time, the secondary characters, the plot, and the deft insights you offer into human behavior. I’ve read Uncommon Passion three times now and, each time, I am more taken with its worth. 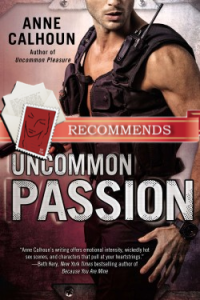 Rachel Hill is, at twenty-five, new to the world as we know it. Seven months before Uncommon Passion begins, she ran away from the Elysian Fields Community of God, an isolated religious community in rural Texas where she’d lived her entire life. Since then, she’s begun to build a new life for herself. She’s gotten a job and a place to stay at an organic farm, bought a car and a cellphone, and filled out an application for veterinary technician school.

Rachel left Elysian Fields because, as she says,

They needed me to be someone I am not. They expected me to surrender all choice and control in my life to God, and if God’s direction wasn’t clear, my pastor or my father would explain it to me.

One of the choices Rachel’s never been able to make is to touch or be touched by a man. In Elysian Fields, all sexual contact is saved for marriage and Rachel, who stayed stubbornly unwed, is a virgin in every sense of the word. One night, while working at a charity bachelor auction, Rachel decides she’s ready to get rid of her virginity with Ben Harris, a sexy SWAT officer up for auction. She wins him with a two thousand dollar bid.

Ben looks to Rachel like the perfect man for the job.

Perfect, because she’d just bet two thousand dollars that he had no interest in a relationship, no sense that sex was something special reserved for the marriage bed, no inclination to call again.

She doubts he’ll even notice. And she’s right.

They agree to go out one night the next week. It’s Rachel’s first ever date. Ben picks her up and takes her out to dinner. After they’re done eating, though he’s already sure of her answer, he asks what she’d like to do next.

She bit her full lower lip, but met his gaze head-on. “I’d like to go back to your place.”

Her tone, low and clear, set his radar pinging because the words sounded almost rehearsed, but really, he didn’t give a fuck. This was who he was, what he did, because he could do this.

Ben doesn’t give a fuck. Not about anything but his job and his brother. He sure as shit doesn’t give a damn about the women he has sex with. But when he wakes up the morning after fucking Rachel, he’s first shocked and then furious to see blood on his cock. He tracks Rachel down and asks her what the hell she thought she was doing. She tells him her virginity was hers to lose and, anyway, she didn’t think he would know or care. Ben, angry and intrigued, tells her he wants another shot, that he’s got what she needs.

“You don’t know what I need,” she said as she glanced toward the barn….

“I remember,” he said without lowering his voice, “how you were shaking under me at the end. Look me in the eye and tell me you don’t need more.”

She went still again, stiller than he thought possible….

“I want an explanation. You want to do it again. Longer. Slower. Hotter. This time we’ll both get what we want.”

Rachel and Ben begin meeting each Sunday for sex. And though they both believe sex is all they’re there for, as the weeks go by, sex turns into passion which turns into something more, something with a gravitas that surprises them both.

Ben’s and Rachel’s affair is the opposite of a closed door romance. The majority of their interactions are sexual and intrinsic to understanding the relationship they build.

Ben, who has slept with so many women he can’t remember their faces let alone their names, finds making love with Rachel to be outside the realm of his prodigious experience. Ben uses sex to escape from feeling. It’s a tool, like the risks he takes in his job, designed to keep emotion at bay.

Rachel uses sex to feel. She makes each encounter an implement for self-discovery. As Ben watches Rachel push herself to experience all she was denied at Elysian Fields, Ben begins, almost against his will, to see himself differently. Rachel’s inherent strength and the sheer rightness of what she wants make Ben question the confines of his life in ways that challenge and unsettle him.

Ben and Rachel are as engrossing apart as they are together.

It’s satisfying to watch Rachel create a life for herself. The book is written in third person but there’s no distance between the narration and the feelings and thoughts of the characters. Every experience Rachel has, whether it’s watching the way the Texas A&M boys working at the farm for the summer play poker or taking in the expressions of amateur poets at open-mike night at her favorite bookstore in Galveston, Rachel processes it profoundly, using it to build on what she’s previously seen and felt. She’s in control of her life and every step she takes towards her future is authentic and heartfelt.

Ben is equally compelling. His insouciant bravado is the top layer of a complex, angry man. He’s estranged from his family–with the exception of his gay twin Sam–and has spent years punishing himself and his father for actions Ben believes are unforgivable. The man he is in the beginning of the novel is sexy to Rachel–and to the reader–because of his confident diffidence. But the Ben that’s leisurely exposed, the man Ben holds himself back from being, that man, a Ben who can love and be loved, is breathtaking.

Uncommon Passion gets an A from me. It’s uncommonly good. (Sorry. I couldn’t resist.)

→ Dabney
Previous article: DUAL REVIEW: The Lotus Palace by Jeannie Lin
Next Post: Friday News: Sign up at a data collecting company to find out what data they are collecting about you and other news