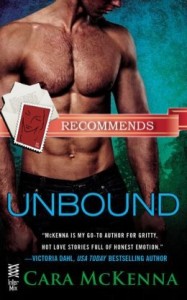 Note: I knew very little about the male protagonist of this story going in, and even if you read the blurb, it’s deliberately vague. Therefore I got to experience learning about Rob’s inner life from intriguing hints, always just one step ahead of Merry, and frankly, that was awesome. I would hate to ruin that experience for anyone, but I don’t see how I can discuss the book in any meaningful way without revealing Rob’s secrets. So I’m going to have a large spoiler section and leave it up to readers how they want to proceed. I’ll have a spoiler-free wrap up at the end; read the comments at your own risk.

Unbound is what I classify as a “cabin-fever” romance: there are really only two characters (I don’t think any secondary characters even get spoken dialogue except in memory) and almost everything that happens is about their interactions in one particular space. It’s far from a claustrophobic-feeling read though — both characters are very physically active throughout the story, and it’s set in beautiful, demanding wilderness.

Merry sets off on a three-week hiking trip in the Highlands, partially as an homage to her dead mother, partially to process the significant changes that have been happening in her life. She’s lost 100 pounds, a really crappy lover, and quite possibly her best friend, and gained a new perspective on herself. Now she’s trying to figure out where to go from here, while loving how it feels to get away from the obsessiveness of dealing with her weight:

Out here, her body wasn’t a collection of desirable parts and shameful ones, a thing to be tricked and punished and outsmarted, outwilled. It was merely a vessel for food and water and sunshine, a structure of muscle and bone, a capable and ready thing.

When her hike is interrupted by a debilitating attack of gastritis, she just manages to make it to a lonely cabin she’d spotted. There she is somewhat reluctantly aided by Rob, an Englishman who’s lived as far from humanity as possible for two years, relying on his routines, hard work, and solitude to control his raging alcoholism. He can’t turn her away, but having company makes him uneasy, especially since he feels incapable of socializing without the lubricant of alcohol.

Merry, intrigued by Rob’s shyness, “manly” lifestyle, and understated good looks, gently and carefully seduces him. But then their encounter goes in an unexpected direction.

“You feel so…” Rob couldn’t seem to find an adequate word, and abandoned the search. “Tell me what you like.” He swallowed again, eyes glassy and drunk. “Tell me what to do.”

There was something more to that final request. She could taste it on her tongue, simply watching his lips form those words. Tell me.

Hints about Rob have been unfolding in thrilling bits and pieces and now we’ve almost reached one part of the puzzle: he’s sexually submissive. But there’s so much more going on in what he calls his “neurological rat’s nest”:

“Are you into that? Bondage and that kind of thing?”
He shut his eyes tightly, but he couldn’t hide from the question. “I suppose.”
“That doesn’t bother me.”
When he opened his eyes, he found her smiling down at him, the gesture seeming to brighten the space between them, though he couldn’t feel its warm. Not yet.
“That nearly comes standard, these days,” she offered lightly.
“It’s not that I’m into it. It’s not that I just like it. It’s…”
She lay down and wrapped her arm around his middle, taking his hand and holding it at his heart. He didn’t think he’d ever felt so perfectly suspended between comforted and disturbed.
She squeezed his fingers. “It’s what?”
“It’s the only thing I like, nearly.” The admission tumbled out like a rock, juddering up through his throat and lodging itself between them. But once it cleared, he found the depths of his lungs, the relief of a full breath, the ability to swallow.
“How interesting.”
He laughed sadly. “No, it’s really not.”

Rob has fetishes, and his kinks are mostly not cute, mainstream or glamorous — not just bondage, but ropes, pain, humiliation and cock worship. And like his alcoholism, there are no halfways about it — he can’t get off without somehow involving his kinks or retreating into his own head, which of course has been very emotionally draining on his previous lovers. But Merry is in exactly the right head space to take a dominant role, and she discovers how exciting it is to be able to totally blow Rob’s mind. And Rob discovers for the first time that he can harness his compulsions in order to be truly present with Merry, and give her what she desires as well.

I’ve never encountered such a raw, visceral, genuine portrayal of fetishism in erotica. For much of the sex scenes we’re inside Rob’s head, and the intensity of his feelings as he finally gets what he most needs is overwhelming. The complicated balance between two partners when they’re wired so differently is also captured here, and the story honestly shows Rob’s deeply internalized shame without shaming him.

Merry is less obviously intriguing, but I was impressed with her character as well. The experience of having lost a lot of weight hit the mark with me: the physical hangovers like sagging breasts, the tedious obsessiveness with calories, exercise — “fucking numbers” — the happiness at having changed coupled with resentment at not having been good enough before, and the lasting insecurity that comes from feeling unseen and unappreciated as you were.

I also thought Merry embodied a desire that may be at the heart of romance for many readers, the desire to be fiercely wanted:

He lowered to his forearms, nose brushing hers. “What do you want to feel? The way I always want to feel degraded — what do you want to feel with this man? With me?”
“Desired. Like, cherished.” She mumbled the final word, looking sheepish. “Just like the way guys look at girls in stupid romantic movies.”
A deep sadness rose in Rob, to imagine her fantasies were made of such stuff. Did this mean she felt denied those simple things in her waking life? This kind, affectionate, beautiful woman?
You’re the last man on earth who should think he can fulfill those needs, said a hateful voice.
But perhaps the only man who’s yet bothered to offer. That alone made him feel worthy of the task.

Many people theorize that this longing to be desired is what’s behind the love of dominating, obsessive romance heroes. I don’t know if there’s truth in it or not — I myself enjoy almost all kinds of heroes — but I loved seeing the dynamic playing out with a man who’s pretty much literally as far from the alpha stereotype as you can get, and for whom this has previously been an area of utter failure.

The relationship that ensues is confined not only by space but by time; Merry has to return to California for her father’s wedding. (An event especially hard to miss since he’s finally legally able to marry his boyfriend.) As the inevitable parting approaches, the suspense about what will happen between them builds — particularly as Rob has yet to tell Merry about his alcoholism, and how impossible he feels it is for him to return to regular society. Waiting for that axe to fall was brutal — the longer it took, the worse I knew it was going to be.

I really hope this book will find its audience.  It’ll inevitably make its way onto lists of favorite bad sex scenes in romance, and the relationship conflict, arising out of Rob’s shame and fear, is very affecting, but readers who heavily favor traditional romance conventions probably won’t go for it. And it’s certainly not perfect. Rob’s self-loathing gets wearying (though for a dry drunk, I don’t think it’s at all exaggerated) and as in a previous McKenna book, the characters smirk so often, I wanted to reach into my ereader and force a different expression onto their faces. I’m a little iffy on the ending as well, which is kind of an uneasy mix between realism and fantasy, with quite a lot happening offstage.

None of those quibbles was significant enough to outweigh how beautifully written and brilliant the book is in general.  It won’t be for everyone,  but if you’re looking for nuanced portrayals of complicated characters I can’t recommend it enough. A