When Jane asked me to review your book Trial by Desire, I was really happy to do so. I had just finished your debut novel, Proof by Seduction, on a plane of all places, and had been intrigued by the secondary relationship in that book. As everyone who reads romance knows, secondary relationships that do not get resolved in the first book invariably find a way of having their own book. 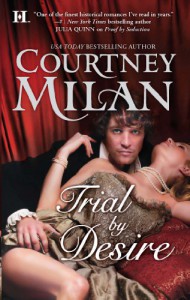 In Proof by Seduction, Ned Carhart attempts to prove something to his cousin, Lord Blakely, and as a result gets both himself and Lady Kathleen into some very hot water. The kind of hot water that leads to a nice, bubbling pot of scandal broth. As per usual, scandal broth’s temperature can only be taken down by the steady application of marriage. Thus, they are forced to do so. Trial by Desire opens three months after that forced marriage has taken place and is told from the point of view of Lady Kathleen, now Mrs. Edward Carhart. She is not, as one would expect, too upset about her untimely marriage. In fact, she rather likes her husband. In fact, she rather wishes he was more into her. She has a plan to seduce him. She's very excited about it. Only Ned disappoints her, breaks her heart really because he's off to China, practically this moment, to do work on behalf of Blakely.

The real meat of the plot begins three years later when Lady Kathleen is walking home from somewhere dressed as a servant. The country road is empty but she's afraid of encountering someone who will recognize her, especially a gentleman. Fate, however, has other plans and sure enough a gentleman rides up. Unlike in life, fiction offers us the delightful assurance that no encounter on the road is meaningless but rather is entirely destined. The gentleman, as one would guess, turns out to be none other than Lady Kathleen’s missing husband, Ned.

If I were to describe this plot, I would say that it is a plot of estranged spouses. Ned has gone from boy to man, as is most often the result of journeys. And Lady Kathleen has suffered the rumor of her husband’s swift removal for the past three years. But this book is so much more than the reconciliation of estranged spouses. It is more than the two protagonist’s getting to know each other as they fall in love, despite the forced marriage. No, this is a book about what makes a hero.

Lady Kathleen has been up to something. In point of fact, she’s been up to something since before her marriage. That something she has been up to is this: she’s been rescuing women from abusive marriages. Now in the past I have read books where heroines are engaged in some similar activity and it is always accompanied by a side of righteousness on the part of the heroine. Lady Kathleen is not righteous, nor sanctimonious, nor silly. She is not engaged in this activity because she is suffering what I like to term adolescent independence. You know about adolescent independence, don’t you? It is something teenagers, college freshmen, and romance heroines suffer from. Namely, in order to prove that they are "mature" and "adult" and "intelligent" they come up with some ass-witted scheme, behave ass-wittedly, and can generally be described as ass-wits. They don’t suffer criticism or critique or the slightest suggestion that perhaps their scheme, as noble as it is, is really a selfish self-indulgence that is about proving something to the world rather than true independence or charity. Lady Kathleen is absolutely, supremely, undoubtedly the opposite of that.

Lady Kathleen is clever. She does it because it is the right thing to do. She does it even though people practically insult her to her face. She is, in many ways, a female Scarlet Pimpernel, shrouded in an armor, a masquerade of silliness and femininity in order that she might get things done as quickly and efficiently as possible. The fact that people underestimate her is what allows her to do what she does.

The trouble comes from the fact that she’s just gone and helped her first noble woman. Unlike the commoners she has helped before, Lady Harcroft’s husband cannot be intimidated by Lady Kathleen’s connections. This is a much more dangerous situation than she has ever been in before. On top of this, Lord and Lady Harcroft are friends of both her husband, absent though he is, and her husband’s cousins, Lord and Lady Blakely.

When Ned returns he knows she has a secret. But Ned is clever, too. He’s clever enough not to assume anything about his wife or the situation he’s come home to. He’s also kind and doesn’t make irrational conclusions. Ned is what I would call a peach, although he is not a typical hero. I would neither describe him as alpha, beta or omega. Ned is just a man. In fact, this is the very thing that Ned struggles with. I don’t think I am revealing anything when I say that Ned’s great monster is his battle with manic-depression or something very much akin to it. This is something that was revealed in your previous novel. However, we get a much more in-depth look at what that depression is like.

I loved many things about your depiction of Ned. One, was that Ned’s depression was not a result of external events-‘there was no uber-Freudian explanation for his depression. Usually and bewilderingly in romance, the depression is always a result of one of the following a) childhood trauma   or b) war. As a person who has suffered from depression for most of her life, I have to say this is just not how it works. Ned’s depression is just who he is. It just happened to him. It wasn’t caused by any event. It was a result of temperament and disposition. This does not make it any less severe or real. He battles it constantly. It undermines his self-worth and in order to combat it he has created rituals for himself. I love the fact that you do not rely on a simple explanation for his depression nor give it a simple solution. You made it a part of him, something that both he and Lady Kathleen must come to accept.

Second, I love the fact that Ned is worried about his own masculinity. He constantly questions whether or not he’s man enough. His depression has made him feel weak and useless. He wants to be strong and useful. That is why he went to China. Not to repudiate his wife, but because he felt he wasn’t the kind of man she deserved. He questioned whether he was a man at all. When they married he was a skinny young kid, now he’s tall and strong but he still doesn’t feel like that, he still doesn’t know that. Ned tries so hard to be good. He wants to be a hero for Kathleen, but he feels unworthy to the task. He feels unworthy even when he does things just as heroic as St. George, for instance.

The complexity of both Ned’s character and Kathleen’s is what made this book work for me. The richness of your characterizations was refreshing. You never relied on easy answers or cliches. Even the villain was not painted with a one-dimensional hue. You dug deep into your characters and made them real people with real voices. For example, the third thing I loved about Ned is that you did not name his struggles with 20th century language. You allowed him to think about it as if he were from that period. To explain it to Kathleen in the terms of the time. That is to say, he questioned is own sanity. Hell, even today when we know what depression is and what it can do, depressed people often question their sanity. The fact that both the way in which Ned has to deal with his problem and the limitations of how he can do that, made the plot more vivid than had you given him a simple problem with a simple solution.

Similarly, as I said above, Lady Kathleen never descends into adolescent behavior as some kind of short-hand for her independence, intelligence or sassiness. Instead, she behaves like a mature woman. She has her own insecurities and issues, but you never allow her to descend into petulance. The misunderstandings between Ned and Kathleen are clearly a result of who they are, how they think about the world, and their own images of themselves. They are not contrived to extend the plot. Neither are the sex scenes gratuitous and ill-placed. Rather, they are paced to make sense within the measure of the plot. I think both the pacing and the characters are a testament to the strength of your prose. For example, in this scene when Ned discovers Lady Harcroft:

He would have flinched himself. He understood all too well how her thinking went.

How many times had he wondered that about himself? What if he had been different? If he had been better? If he hadn't been betrayed by his own weaknesses? Those doubts would debilitate him, if he ever gave them full sway. It had taken him years to learn to discard them, to keep going in the face of his own fears. He could imagine all too well how Lady Harcroft must have felt.

Or this passage when Kathleen is trying to talk to Ned about his problem:

He stepped down; she stared out the doorway of the carriage in disbelief. He hadn't-‘he really couldn't have packed away the conversation as if it hadn't happened. Kate stood so rapidly, she nearly struck her head against the roof of the carriage. "Ned, you-‘you-‘"

Her words sputtered out into cold silence. Exhaling, she gathered her skirts and stumbled to the door of the carriage. But he hadn't left her; he'd taken the footman's place, and as she stood at the edge of the steps, he held out his hand to help her alight. His fingers were warm, even through both their gloves.

"I'm good at jokes," he said to her, his voice so quiet she strained to hear it even above the velvet silence of the night. "When we married, I was excellent at playing the buffoon. After all, it's better to have your sins chalked up to tomfoolery than it is to have everyone realize that you occasionally succumb to this cloying thing that is not quite madness." He grinned again, and that expression was so at odds with the seriousness of his tone, that Kate shook her head.

I think both these passages illustrate what I’m talking about. You do what all good writing should do, that is you reveal the characters not just through description but through dialogue. You allow the prose to carry the story and you trust the prose to create complex characters.

This book is a thoughtful, character driven romance with rich language. Like I said, this book is about what it means to be a hero and the answer is not brawn but brains. A conclusion that is mirrored in the intelligence of your storytelling. A