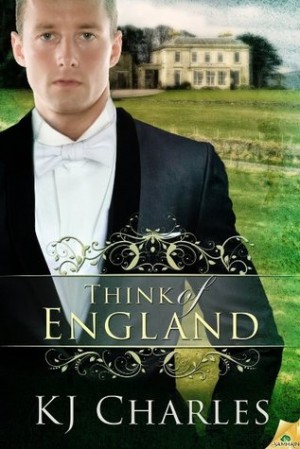 Damn it, why didn’t I think of this book? (And have the willpower to write it, and the talent to make it good, and the tenacity to get it published…) For someone like me who grew up reading many popular English writers, it is such a clever treat — not parody or satire, but the use of familiar archetypes in a deliciously new way.

The main characters are instantly recognizable if you’ve read Georgette Heyer’s mysteries, or Agatha Christie’s early books, or P.G. Wodehouse, or Dorothy Sayers. The story is told from the point of view of Archie Curtis, the quintessential English gentleman/soldier — brave, athletic, scrupulously polite, self-effacing, and deliberately non-intellectual. (But somewhat less hidebound and bigoted than his peers, because of his well-traveled uncle.) Curtis is at a house party to secretly investigate his host, who’s suspected of sabotaging a batch of guns that blew off much of Curtis’s right hand, and killed and wounded many of his fellow soldiers in the Boer war. It’s a noble cause, but he’s utterly disgusted by his role:

The selection of yellow-back novels included a wide ranges of mysteries and romps by Edgar Wallace and E. Phillips Oppenheim, all packed with gentleman spies, mysterious foreigners and sultry seductresses. Curtis enjoyed that sort of thing, but he couldn’t make himself fancy the idea today. The actual life of a gentleman spy, it seemed to him, consisted of sneaking about, breaking the rules of hospitality and generally being anything but a gentleman, and the only mysterious foreigner around was da Silva. He was probably the closest thing Peakholme had to offer to a sultry seductress, come to that.

Da Silva would be the villain if this were an Oppenheim story. Curtis wished he was the villain now.

Daniel Da Silva is also instantly familiar — a sinuous, effete poet with a biting wit, the type of man that the ladies find terribly amusing, and that men of Archie’s class immediately classify as a “pansy” and a “dago.” (If they become aware that he’s also Jewish, even nastier words come into play.) He would indeed be the villain in most books, but Heyer had the brilliance to make a similar character into a hero once, and Charles also pulls it off beautifully. As you would hope, both men move beyond not-all-that-likable stereotypes to become complex, multifaceted characters, as they form an alliance to solve the mystery and begin to have feelings for each other.

The mood of the book never falters. As is typical of a English house-party story, the opening is a little slow, confusingly introducing a great many characters. But things speed up and heat up quickly, with some nail-biting suspense and scorching sex scenes. (The heat coming more from intensity than graphic writing.) Okay, we wouldn’t get sex in Heyer or Christie, but I still relished the familiar feel. There are even several bold and clever women characters — the ones who would be Tuppence to Archie’s Tommy in het romance — who may not be romance heroines but are certainly heroic.

The main characters really make the story, though. Curtis is adorably confused as he tries to rationalize away his attraction to da Silva:

All his previous encounters had been with chaps like himself: soldiers, sportsmen, good fellows. He had an unformed but definite idea that being queer entailed doing something different, womanish, something like the rouged men in those London clubs. Like da Silva, with his perfectly shaped brows and tight trousers and mannerisms.

Yet he continues to fixate on da Silva’s hair, eyebrows, mouth, and utterly scandalous nipple ring (I have no idea whether this is plausible or not, but it’s certainly possible) until, near the end, he is captivated by seeing him in wire-rimmed spectacles. And readers everywhere swoon.

Since he has no idea how to proceed as a queer chap, Curtis’s efforts to form an actual relationship with da Silva are laden with awkward charm and some angst-filled misunderstandings. Daniel has his own, painful, expectations of men of Archie’s type, so he also has to learn to see beyond his learned prejudices.

We don’t see da Silva’s point of view, but his personality comes through clearly. His mannerisms and waspish wit are the coping mechanism of a sensitive and clever man who faces constant prejudice. (The wrong ethnicity, religion, sexual orientation and class — he gets it from all sides. When Curtis asks him how he puts up with nasty comments, he replies, “I’m terribly rude, in situations where people can’t hit me.”) I loved him for his humor, his irresistible smarts and competence, and the vulnerability that comes from his imaginative nature. Curtis also becomes more attractive seen through his eyes — comfortingly large, strong, considerate, and reliable. In another swoon-worthy moment Daniel tells him, “I never knew the most arousing sight in the world was a big man reading poetry.”

I don’t subscribe to the “two dicks are better than one” theory of loving m/m romance, but how cool is it to find two of my favorite kinds of hero in one story? It’s especially appealing because we so rarely get to see the suave, ultra-confident sort of hero in a vulnerable place; in het romance, it’s part of his mystique that he always be right and always be in charge. I adore that kind of hero, but since I just wanted to pick Daniel up and comfort him, it was vicariously satisfying to have Curtis do it for me.

I should note that some racial/anti-semitic slurs are used; they’re integral to the setting and don’t reflect badly on the heroes. There’s also brief but somewhat shocking violence, and a scene that could be triggering for anyone sensitive about physical coercion.

The ending leaves terrific potential for a sequel here, or even a series. I hope we’ll get another book — a story for the awesome women characters also wouldn’t go amiss — and that I’ll read it with the same delighted smile on my face. A

(Many thanks to the twitter friends who buddy-read this with me and gave me new insights.)