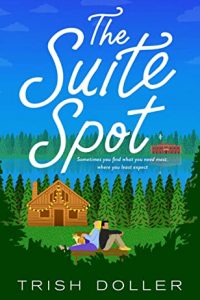 Content warnings:  grief, past death of a child, sexual assault

Last year you released Float Plan, the first in the Beck Sisters series. I loved it (in fact I must apologise because I did not include it in my best books of 2021 and I should have – in my defence I read it in 2020 and so my Goodreads sort failed me) and so The Suite Spot became one of my most anticipated books of 2022. Like in Float Plan, there are some heavy topics covered as the characters have dealt with serious trauma and for some readers this will be a deal breaker. I admit, this one hurt my heart – the hero’s young daughter died following a medical event. He’s still dealing with the grief of that (and always will be). His marriage imploded as a result of the tragedy.

Also like in Float Plan, the theme of The Suite Spot is picking up the pieces of your life after bad things happen and finding joy and happiness. In Float Plan the heroine, Anna, was grieving the loss of her fiance to suicide. The hero had lost his career as a racing boat sailor after an accident caused a below knee leg amputation.

In The Suite Spot, Rachel Beck (Anna’s sister) is a single mother to Maisie (nearly 4), trying to build a career in hotel management. She’s been waiting and hoping for Maisie’s dad, Brian, to commit to both of them. He’s charming and keeps worming his way into Rachel’s good graces after repeated disappointment.

Rachel is the night reception manager at a fancy hotel in Miami Beach and in line for promotion to concierge when a rich asshole gropes her, tries for more  (it happens on page but it’s not as awful as it could be) and causes her to get fired after he is unsuccessful.  In need of a new job and after Brian disappoints her one too many times and she finally realises he’s never going to be the man she needs him to be, she’s offered an opportunity to manage the accommodation at a new hybrid microbrewery and specialty hotel in Ohio. With little to lose, she decides to make the move with Maisie to Kelleys Island in Lake Erie where she meets owner and brewer, Mason Brown.

The hotel and brewpub is more of a concept than an actuality at the time Rachel arrives and she has to be convinced to stay (of course). But Mason offers her carte blanche to decorate the hotel and, once open, to run it unfettered; she can’t resist the opportunity.

The island is small but Rachel soon makes friends with the locals and builds connection, finding the sense of community and home she’d been lacking she’d been lacking in Florida, notwithstanding her beloved mother is still there.

Mason is sad and prickly – a little on the grumpy side even (I have a soft spot for grumpy heroes).  Rachel describes him thus:

He lost his daughter just over a year ago and his grief and subsequent implosion of his marriage are still fresh. I liked that Mason’s ex-wife was not demonised. Both tried their best but the trauma of losing their daughter was too much for them to get through as a couple. Neither did anything wrong.

Losing Maisie would be unbearable, so I can’t blame his ex-wife for not listening when she was grieving. But I also can’t blame Mason for withdrawing into the one thing that brings him comfort when Jess was probably not equipped to offer it. No one is the villain here. They both deserve happiness.

Of course, having Maisie around brings back a lot of memories for Mason and sometimes he needs to take a bit of a time out but he’s never mean or gruff with Maisie.  Rachel and Maisie live in the upstairs of the sprawling house on the property and Mason lives downstairs but they share a kitchen so it’s not possible to entirely live separately. After Rachel appreciates Mason’s history however, she makes every effort for her and Maisie to minimise contact. It’s not too hard because Mason is busy at the brewery making all sorts of fancy beers (most of which I understood very little about but if you like beer I imagine they’re very exciting) and Rachel is focused on the cabins which will be the boutique hotel side of things.

It helps that Mason is very wealthy having cashed out of a successful business venture shortly after his daughter was born with a heart defect, in order that he could be there for his family. He can fund the project but is fairly clueless about how to actually make the hotel work. Rachel has the skills and creativity to bring it all together and it quickly becomes apparent they make a great team.

The thing I didn’t love about Float Plan was the “black moment” I saw Anna and Keane heading toward and that I desperately wished for them to avoid. They’d been through so much and I just wanted them to be happy. (Fortunately they weren’t apart for very long and this was pretty much my only criticism of the book which was otherwise wonderful). In the acknowledgements at the end of The Suite Spot you note: Had 2020 not been such a traumatic year, The Suite Spot might have turned out to be a different book, but I found myself needing to tell a story that was warm and gentle. Had 2021 not also been such a traumatic year I may have wanted to read a different book but I need warm and gentle and kind too and so I found myself wallowing happily in the romance which was of the slow burn, cautious but inevitable kind. There is conflict and tension in the story but Mason and Rachel’s relationship unfurls organically and sweetly and the conflict does not come from within.  And,when it comes it doesn’t take many pages to resolve, something I dearly appreciated.

Mason is a man coming out of the stupor of grief and loss and Rachel gives him the time and space to do it both for him and for her. She doesn’t want to be a rebound  – she wants him to be sure too. And so the romantic arc is about them getting to know one another and becoming sure. In many ways their coming together is as easy as breathing. Maybe that sounds kind of boring but it was actually not boring at all. Also, it was beautiful. I didn’t want high drama. I wanted to read about good people being kind and being happy and falling in love and that’s exactly what I got.

Mason and Rachel also have excellent sexual chemistry so I want to be clear to readers that “sweet” does not mean there is no sexy here. It’s not super explicit but it’s definitely sexy too.

I read this book in about 24 hours – wanting to immerse myself in the story and enjoy it like a bear hug from the best person you know. Honestly, this book was just about perfect. No doubt this book will be on my Best of 2022 list – and this time I won’t miss it.

“You are beautiful and smart,” he says. “And any man who doesn’t appreciate all of you doesn’t deserve any of you.”

→ Kaetrin
Previous article: REVIEW: Of Sword and Shadow by A. L. Sowards
Next Post: Reading List by Jennie for October 2021 through December 2021