I’d had your novella, The Story Guy, in my TBR for a while.  Then, last month, on Twitter, I saw a link to a post you’d written for Wonkomance, the site you and several other authors I respect run. The post, entitled Love Actually, a meditation on the nature of love that starts with an exploration of First Corinthians, knocked me off my feet. It’s glorious, eloquently sad, and wrenchingly real. I then began to read The Story Guy which turned out also to be glorious, eloquently sad, and wrenchingly real. It broke my heart, knitted up the aching pieces, and left me murmuring yes, yes, the greatest of these is love.

The narrator of The Story Guy is Carrie West, a librarian “staring into the second half” of her third decade. Carrie’s content with her life with one exception.

I like my job. I like that I have small niches of friends, of three different generations, that all do different kinds of things in our artsy rust-belt city.

I like that I am an only child and can have my parents’ attention to myself when I need it. I like my noisy apartment that I’ve rented for more then ten years. I could get serious about dating, but dating is something I don’t like unless I already know I like the person, have already cultivated at least a tiny bit of a crush out in the wild, away from the pain of a first coffee date.

When it comes to sex, I admit to feeling empty.

One night, as Carrie is perusing the MetroLink page for her city, she clicks, as she often does, the link for Men Seeking Women. She does this not because she’s looking for love but rather because she loves the voices there.

It’s what I imagine men might really be thinking and never say. They yell and cry and woo and break themselves open before their post slips off the page.

Suddenly, she sees an entry with the single word Wednesdays in the heading. Curious, she clicks on it and sees a picture of a man, dark-haired and handsome, grinning at someone not in the frame. Carrie reads his ad.

I will meet you on Wednesdays at noon in Celebration Park. Kissing only. I won’t touch you below the shoulders. You can touch me anywhere. No dating, no hookups. I will meet with you for as long as you meet me, so if you miss a Wednesday we part as strangers. No picture necessary, we can settle details via IM. Reply back with “Wednesdays Only” in the subject line. 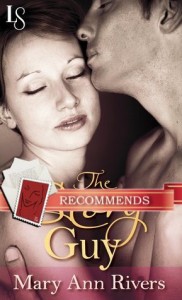 Carrie, after thinking about it for a nano-second, emails the guy, tells him she’s “intrigued,” and sends him her IM handle. He responds–his name is Brian–and, after chatting, the two agree to meet the next day, Wednesday, at the teahouse shelters in the Park.

For both of them, the kiss is intense, jarring, maybe the best kiss of their lives. When they break apart, as the end of the hour nears, Carrie starts to suggest meeting sooner than next Wednesday but Brian makes it clear he doesn’t want that. This baffles Carrie and by Saturday night, alone in her apartment, obsessing over Brian, she’s desperate to talk to someone about mystery that is Brian. She calls up her intern Justin–I love Justin–who agrees to meet her at Cluck You Chicken, a Jamaican dive around the corner from Carrie’s apartment.

Justin is witty and wise and listens to Carrie’s tale. When she asks him for advice, he tells her to break the rules Brian has set and to IM him. When Carrie asks why, Justin says,

(I) just bet something interesting will happen if you try to talk to him without the whole date thing. Sure, maybe he is just a normal-seeming guy with a weird sex thing and it’s all bad news, and I recommend staying kind of disengaged until you find out, but he may be a story guy.”

“Yeah, a good guy with a bad story doing something stupid.”

“Explain to me why a story guy is better than a pervert.”

“Story guys are like life highlighters. Your life is all these big blocks of gray text, and then a story guy comes in with a big ol’ paragraph of neon pink so that when you flip back through your life, you can stop and remember all the important and interesting places.”

Carrie gets home, takes Justin’s advice and soon Brian responds. They IM into the night, carefully talking about and yet around why Brian limits himself to one hour, once a week, of kissing.

Brian is a story guy. Or, as Justin says, later in the novella, he’s “a Russian novel.” The reasons behind Brian’s rules are calamitous, inestimable, and relentlessly demanding. And so damn sad, it’s exquisitely unbearable.

As Carrie falls for Brian the limitations of his life become slowly clear to her. She realizes there’s no easy way to love Brian, that the life he lives outside of that one hour he gives himself a week is a life with challenging complications and etched with sorrow. Yet, as she determinedly inches her way into the margins of Brian’s life, she sees the person she could be, the kind of love she can offer Brian.

If I wanted, I could choose to make my life a place that Brian could step into. He didn’t have any room to move, but he still found that hour, once a week. I can choose to give that hour to him and make it the most expansive time in the universe. I could. If he wanted me to.

I have a life to live.

The Story Guy is a love story. But it’s also a life story, a story about how we do and don’t define our lives. It effortlessly illuminates the gifts of love, of time, of grace, of sacrifice that surround us and that we rarely savor. Each chapter takes place in an hour or less. Every hour, whether crowded with longing, sadness, comfort, and/or joy, is an hour Brian and Carrie must live in, learning as they love to demand more from time, to make each hour as replete as possible. Brian’s circumscribed vision of his possibilities begins the story; Carrie’s expansive vision remakes it.

It’s an amazing work, made more astonishing that it’s Ms. River’s debut. Her prose is implacably assured; her pacing, irreproachable. The Story Guy gets an A. Read it.

I’ll leave you with the lovely last line of the novel.

It’s Wednesday, though, and the time in front of us is immeasurable, the hours crowded past every capacity.