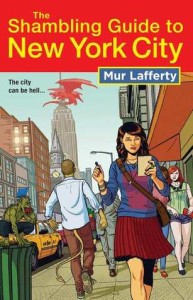 As a New Yorker, I love reading urban fantasies set in NYC, even if I’m so often disappointed by a white-washed tv-generic setting that you often see in police-procedural tv shows. This hilarious book however, brought to life the diverse spirit of NYC.

Zoë Norris is a recent North Carolinian migrant to NYC, seeking escape from an affair with her boss that resulted in her running in fear for her life from the wife she didn’t know her boss had. An out of work editor, she comes across an ad in a dirty decrepit bookstore for a new travel guide editor for a new publishing company. Though the job description fits with her previous background perfectly, mysteriously, the two odd-looking people she meets who are actually part of this company keep telling her not to apply because she wouldn’t fit in. This makes Zoë even more determined to prove them wrong. Though this kind of stubborn pig-headed attitude can be irritating, this is a quality that is oddly endearing in this particular protagonist.

In short order, Zoë discovers that not only are supernatural monsters real (who call themselves coterie), “passing” as ordinary humans, but that she would be working with vampires, zombies, a water sprite as well as a Welsh death goddess to create a travel guide for coterie tourists to NYC. Confronted with the strange and previously unimaginable, Zoë shrugs her shoulders and gets to work. I really liked this quality about Zoë. Her determination to succeed at the job in spite of (or perhaps because of the nature of her colleagues and intended audience) reminds me of many New Yorkers I know.

Unlike other books, the supernatural monsters are not just humans with fangs and horns. There is a strong sense of completely different cultures at work. Zoë’s efforts to navigate the cultures without offense, is reminiscent of an expat trying to adjust to a foreign country. For example, Zoë learns that one should not comment on the appearance of a construct, a Frankenstein-like being made up of parts from different human, even when they have the face of a college ex-boyfriend (which means that he died and had his face stolen, sewn on to another body, and was reanimated into a new being). When Zoë tells her co-workers, refreshingly, all of them take her seriously. In fact her vampire boss decides that it merits some additional research and investigation.

Another thing Zoë learns is that messing with other coteries’ food is considered an insult. Since different coterie members have different food sources (zombies – brains, vampires – blood, incubus – sex, etc) and there’s no real reason to steal each others’ food. When the zombies’ food from the work fridge disappears, which threatens to reduce them to the attack-any-human-for-brains-monster of lore, thereby placing the only human in the office in danger, it’s pretty clear that someone is out to mess with Zoë. Though the vampire boss is aware and sympathetic (and does help Zoë investigate further and save her life), he’s not convinced it merits any additional time extension on book deadlines. The vampire’s response is comedic without intending to be, and a perfect reaction for the character established. This sort of nonhuman reaction was well done throughout, regardless of whether the scene involved death goddesses or zombies, reminding us that although they may mean well, they are different beings with different social mores.

In many other fantasies featuring other non-human creatures, the monsters character-wise are basically humans with weird appearances and powers. Some books make them feel more other, but there are very few books that also display a strong sense of “other” monster culture. I think this may have been the first book I’ve ever read to depict the sense of culture shock and attempt at understanding that a human transitioning between the two worlds might feel.

Moreover, the funny travel guide excerpts interspersed between the chapters detailing various supernatural elements of NYC such as the raven banking system (run by real ravens), the Statue of Liberty’s (which apparently is the tomb of a famous demon) and fae hotels in Queens helped to create a sense of a vast unseen world.

For those who are romance readers exclusively, there is a minor romance subplot. but it’s really not a focus of this book at all.

-spoiler-
[spoiler]The pair agree to eventually start seeing each other at the end of the book, though it feels a lot more open-ended then some romance readers might like.[/spoiler]

The story arc is unique, the setting and the inevitable cuture clash misunderstandings are a comedic goldmine. If Neil Gaiman’s “American Gods” got together with Douglas Adam’s “Hitchhiker’s Guide to the Galaxy,” this book would be the love child that ran away to New York to work in publishing. I really loved this book, and although I was slightly confused during some of the action scenes going on at the end (giant monster golem rampaging through Manhattan), it didn’t detract from my enjoyment of the book. I’ll be eagerly awaiting the next Shambling Guide, whatever city it may be. A-

→ Amy
Previous article: Out on the Border
Next Post: REVIEW: Any Duchess Will Do by Tessa Dare