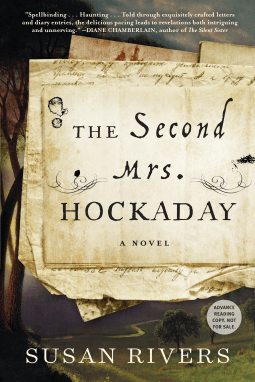 When Major Gryffth Hockaday is called to the front lines of the Civil War, his new bride is left to care for her husband’s three-hundred-acre farm and infant son. Placidia, a mere teenager herself living far from her family and completely unprepared to run a farm or raise a child, must endure the darkest days of the war on her own. By the time Major Hockaday returns two years later, Placidia is bound for jail, accused of having borne a child in his absence and murdering it. What really transpired in the two years he was away? To what extremes can war and violence push a woman who is left to fend for herself?

Told through letters, court inquests, and journal entries, this saga, inspired by a true incident, unfolds with gripping intensity, conjuring the era with uncanny immediacy. Amid the desperation of wartime, Placidia sees the social order of her Southern homeland unravel. As she comes to understand how her own history is linked to one runaway slave, her perspective on race and family are upended. A love story, a story of racial divide, and a story of the South as it fell in the war, The Second Mrs. Hockaday reveals how this generation—and the next—began to see their world anew.

Rape, loss of a child, treatment of slaves

I requested this novel months before I read it. As such, most of what I remembered of the blurb was that it concerned an American Civil War era woman who married a widower. When I began reading it, I honestly didn’t know what to expect or even if the characters would survive the war much less what end they would reach. I doubted the typical romance HEA though. In that I was correct as it is much more historical fiction.

Briefly I contemplated checking the end of the digital file to get some idea of what to brace myself for but by then I had started the book and felt vaguely uneasy about “cheating.” I’m so glad I didn’t peek as the impact would have been diluted. Instead I just slowly took it in.

Is this about the Civil War? Yes as seen from a Southern POV. Is it about slavery? Yes and it doesn’t shy away from the ugliness or horror of it. Is it hard to read? At times it is but it’s also one I inhaled in huge gulps, glued to the page and unaware of the passage of time as I got lost in it. Does it deal with marital problems? Yes and the loss of a child. Does it read as period? The language and attention to detail are superb without it turning into a history lesson with a final exam.

I desperately don’t want to give anything else away. I will say that there will be triggers in the narrative which might prove too much for some readers. This is a world at war but also a world with a long history of cruelty and such horrors that merely reading about them is disturbing and unsettling. This is no sanitized land of cavaliers and belles now “Gone with the Wind.” Readers need to be ready for that.

The reveals are gradual but telling. You’ll know you’re headed into murky waters with terrible things to come. The final revelation is something foreshadowed to be as awful as imagined. It is not overplayed for cheap emotions and is all the more powerful for that.

So why did I keep reading this sensing the flames of hell licking closer with each page? The writing is that good. For the time I was reading it, I was there. I could hear these people’s voices, see them, feel what they felt and experience what they went through. I gulped 75-100 pages at a time and almost couldn’t put it down. I felt I came back into my world when I finished and emotionally wrung dry. I was subsumed by the story and just had to know what happened next. The writing is great as is the ear for dialog and the story telling sublime. It is a story with characters who will haunt me. Read the triggers but don’t cheat yourselves by reading ahead or looking for spoilers. It is not a book for the faint of heart but it is one that will richly reward. A

→ Jayne
Previous article: REVIEW: If I Was Your Girl by Meredith Russo
Next Post: Review: An Evidence of Magic by Kris Michaels and Patricia A. Knight