REVIEW: The Orchard by Theresa Weir

A while back you posted on Twitter a couple of drawings that your late husband had done, explaining that while he was an accomplished artist, he never felt comfortable thinking of himself that way or having his art made public. At the time I thought it was sad that someone who so obviously had the talent his drawings exhibited never thought of himself as an artist. Now, after reading your memoir, The Orchard, I feel that I have a deeper understanding of why that would be, and an even deeper sadness about all the reasons that it would, could, never be any different. But I also came away from The Orchard with a deep respect for your storytelling skill and the austere beauty of your prose. Even the harshest, ugliest moments of The Orchard are rendered carefully, gently, even lovingly, not in a way that softens their blow, but rather in a style that deepens their impact and significance. 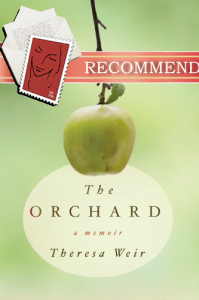 So here’s the thing about apples: perfection on the outside can hide a multitude of ugliness on the inside. Worms and disease. Bruises that don’t show up until at least an hour after the fruit is handled with anything but the lightest touch. And producing the perfect apple requires incredible vigilance, sacrifice, gallons upon gallons of pesticides, and ideal weather conditions. And still the apple can be rotten on the inside. This irony permeates the narrative of The Orchard, starting on the first pages when the 8-year old narrator (referred to as Theresa only once throughout the entire course of the book*) is offered a mushroom by the neighbor:

“Have one, Theresa. I’m sure your mother won’t mind.”

She smelled like soap and clothes that had just been ironed. She wore pink lipstick, yellow beachcombers, and white sandals. She was so unlike the moody women in my family.

I ate a mushroom.

Later my mother and aunt put their dark heads together and whispered their concerns about the food.

They could be poisonous.

I didn’t tell anyone that my life was over. Instead I went to my room, lay down on the bed, and waited to die.

The mushroom was not poisonous, but that did not stop Theresa from experiencing all manner of ills, often from the very people in her life who should have been nurturing and protecting her. From her thoughtless father, who simply announced to her one day that he was leaving and would not be back, to her moody, self-centered mother, who brought man after man into her life, yearning for a happiness she could never create within herself, Theresa was too often a casualty of other people’s decisions and desires, never cherished as the center of someone else’s world. Even some of the people who loved her the most ended up failing her in one way or another.

It is therefore no surprise to the reader when she impulsively marries Adrian Curtis, the son of a prominent Illinois apple farmer, local royalty in 1970’s Henderson County, a handsome young man who picked up Theresa in her uncle’s bar and carried her to his family’s orchards, a few miles away from where she lived but forever away from where Theresa had ever imagined her life going. The vagabond child of a mother who didn’t want her and the niece of an uncle who couldn’t offer her much beyond his own affection for her suddenly became the 21 year old wife of a 23 year old apple farmer without even knowing what marriage would entail, let alone life on a farm with in-laws who despised her for her lack of pedigree and a young husband who could never articulate why he had wanted so badly to marry her, let alone ever tell her he loved her.

And yet the marriage and the family Theresa and Adrian built over the next 18 years became the very substance of Theresa’s life and of the story of The Orchard, with all of the bittersweet moments strung together in a narrative of incredible emotional resonance. Of her uncle, Theresa remarks with approval that unlike the women in her family, “he wore his cloak of despair in silence.” Adrian is the same way. No matter how long she spent with him, she “still felt he harbored a secret self none of us would ever know. In the middle of the night, I would wake up and lie very still, and I would feel his sadness in the bed beside me.” His incredibly controlling and cold mother (she tied toddler Adrian’s left arm to his side until he learned to be right handed) had almost inhuman expectations for her son, who toiled on the family farm like any hired laborer, until one day he would inherit the farm and virtually nothing would change. Except that Theresa was soon pregnant, and her son would be expected to follow in his father and grandfather and great grandfather’s footsteps.

Although The Orchard is Theresa Weir’s memoir, Adrian quickly becomes its central figure, in part because he and their children were the most important people in her life, in part because of how she struggled to understand her enigmatic husband, in part because of Theresa’s conditioned instinct to remain unobtrusive, and in part because Adrian’s life provides such a powerful vehicle through which Weir can investigate the intertwined themes of beauty, artistry, fragility, and devastating loss. Adrian could never tell her he loved her, but he bought her a horse after her beloved grandmother died, and Theresa recognizes this as his way of acknowledging her grief and trying to soothe her loss. He is a devoted father who will not let his children participate in the toxic rituals of apple growing, even as he puts himself in harm’s way every single day to meet the demands of the fruit’s elusive perfection and his own mother’s ever-looming rejection. In fact, Adrian’s devotion to his disdainful parents is so complete that early in his marriage he even eats suppers at their house, leaving Theresa alone for all but the late night hours, when they didn’t even speak to one another in the darkness of their tiny, musty cottage on the orchard property. Later in their marriage, when Theresa proposes they move away from the orchard, Adrian brings her to his parents so she can understand why such a thing would be impossible:

Adrian’s father made eye contact with me, and I almost recoiled at the iciness I saw there. Then he turned to his son: “If you move, don’t bother ever coming around here again. You won’t be welcome.”

And yet this man, who learned to draw right-handed because his mother had tied down his left hand when he was only three years old, is passionate in his own way. He draws beautiful pictures he won’t show anyone. He draws the things of his life, the “weeds,” as Theresa points out, the things that plague him like the codling moth that could destroy a harvest of apples like nothing else. He appreciates the beauty of the orchard and strives to develop his own type of apple, the Sweet Melinda, which “would have given Adrian a voice, given his ideas weight and validation.” In short, “[t]hey would prove his worth in a place where worth shouldn’t have to be proven.” And as Theresa shares in Adrian’s excited anticipation, she “understood the reward for seeking perfection.” Unfortunately, falling short of perfection could be a devastating drop.

What ultimately happens to the Sweet Melindas is, like so much else that happens to Theresa, an omen of things to come. Perfection on the outside, whether in the beauty of her husband or an apple, or even an apple farm, could hide all sorts of ugliness on the inside, and while you worked and sacrificed to keep that patina of perfection intact, worms or cancer or past fears and disappointments could be eating away at the soft, fleshy inside.

At one point Theresa notes that “[m]odern farmers were artists, destructive architects of the land.” As sublime as the aroma of the apple blossoms was, it could never eclipse the garlicky odor of the pesticides that was always in the air. Every beautiful site, every beautiful moment held the possibility of its opposite and the probability that something bad was the price to be paid for that beauty. And as she narrates her tale, Theresa returns again and again to the dualities of this world of which she was such an integral part but to which she never fully felt she belonged, observer and participant, her story unfolding like testimony, a confession of how helpless she often felt in the face of her fears and a chronicle of how stubbornly she survived, and in many ways, thrived in the beautiful but treacherous world of mortally engineered natural perfection. Like the apples, yet not quite the same. Similar in the way an apple so easily bears the scar of an overenthusiastic or aggressive grip, just like the human heart. Different in that where an infected orchard has to be plowed and burned, human beings continue on, given more opportunities to suffer or thrive.

Although we tend to read memoirs as “true,” I read The Orchard as a captivating, suspenseful, dramatically compelling story, and whether its details are strictly accurate is of no concern to me. The narrative consistently reflects a profound respect for art and beauty, as well as an appreciation for small blessings and the very human struggle for survival and happiness. And the interesting juxtaposition of Theresa’s strong-voiced narration and her apparent desire to be inconspicuous (the single use of her name, for example) raises fascinating questions about subject v. subjectivity, presence v. being present, identity v. identification, etc.

Ultimately, though, there is an emotional truth in Weir’s writing that is characteristic of the best fiction, and all of the characters in this narrative are vivid and “real” at a visceral level. I cried through most of the second half of the book and highlighted more passages than I could ever recount in a review, struck again and again by the straightforward artistry of the text, the depth of its metaphors, the complexity of its themes, and the absolute stark beauty of its truths. That Weir also writes Romance and Romantic Suspense is both astonishing and completely understandable if the events of this book are anywhere near the truth of her life, and while Theresa’s writing is a part of The Orchard, it is not, by any stretch, the focal point or even a main point of the narrative. Indeed, I hope this book reaches far and wide in terms of readership, because it’s so powerfully crafted and so satisfyingly cathartic. There is a great deal of sadness here, but it’s rendered with such care and such sensitivity that it becomes beautiful in its own way, sublime in the reader’s experience of every mundane and profound tragedy. And, for me, a perfect A read.