We should all know the story of Scheherazade, right?

It’s the frame story of the Arabian Nights, and famous enough in its own right. Once there was a murderous king, who, after he finds his first wife to be unfaithful, marries dozens of women, murdering every one at dawn… until he meets a woman who stills his murderous rages by mesmerizing him with a story per night, ending each story at a cliffhanger before the fateful dawn. 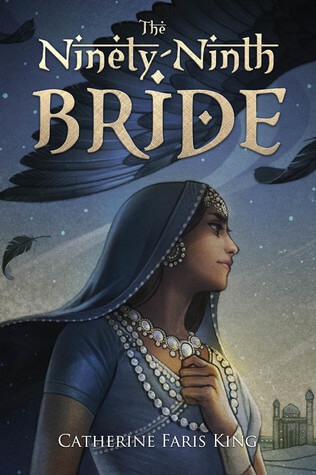 I’ve read a lot of mediocre to bad retellings of this. Shadow Spinner, The Storyteller’s Daughter, The Wrath and the Dawn… all have elicited mehs from yours truly. They’ve either lacked the original liveliness and charm of the Nights, they don’t get the culture, or the Scheherazade character comes across poorly. A friend of mine wondered if the story of Scheherazade could even be retold for a modern market. Was it too problematic?

But at last, I found it! The perfect retelling of Scheherazade, and you wrote it.

The Ninety-Ninth Bride, a YA fantasy recently expanded from an 11,590 word short story published in 2014 into a 64,060 word novel, is the perfect antidote for these dark times. It’s elegant, simple, evocative of the Arabian Nights but not overwritten. There are also no racism or harem tropes or Orientalism. It’s filled with magic and monsters, straight from Arab folklore, but sprinkled here and there with eloquent spirituality. The Book Smugglers website informs me that you are of Lebanese and Irish ancestry, and I feel that this reflects within the style, as there is charm and authenticity in spades.

Bride reminds of Husain Hadawy’s translation of the Arabian Nights. I am also reminded of Rafik Schami’s Damascus Nights with the whimsy of Lloyd Alexander, but with a distinct feminist spirit… Yet it’s all light to the touch. It’s not heavy handed at all. Other authors have tried to turn the story of Scheherazade into a romance, with problematic results, but you completely circumvent it.

The story opens in the city of Al-Rayyan (now in modern-day Qatar, though the geography is kept intentionally vague). The heroine is the intelligent, demure but neglected younger daughter Dunya, the chief vizier’s daughter. Her mother died in childbirth, and as her father and sisters are on the self-absorbed side, she’s closest to her beloved grandmother; but once her grandmother dies, she finds herself slipping through the cracks and becoming more irrelevant than ever. Her friendship with the beautiful and sensitive Sultana, whom she meets at her wedding with the Sultan, is one of the highlights of her small and circumscribed life. The Sultana even lends her books, including an illuminated book of prayers. But the Sultana’s shocking and mysterious death— accompanied by the Sultan’s madness— throws her entire life into disarray.

As in the legend, the Sultan has decided to marry a woman every night, and murder her the next dawn. Poor Dunya is hurled into the fire by her awful father, who decides to sacrifice his most-expendable daughter to keep the allegiance of the sociopathic king. After befriending several women of the harem, who go before her one by one to the imam and then the axeman, Dunya thinks she’s doomed to be executed at dawn, just like her friends— when all of a sudden a mysterious girl named Zahra, who claims to be her sister, appears and takes her place as the Sultan’s bride.

Dunya is confounded. Who is Zahra? Why does she know all these fantastic stories? Why is she helping her?

And what can Dunya do to stop the growing, darkening curse on her beloved city?

I can’t speak too highly of this book. It’s delightful, with fun world-building touches like bottom-feeding mermen who eat garbage, nasnas who sell Venetian mirrors, and djinn who live in kitchen fires, but a real, tangible emotional core that made me cry a couple of times. There’s a touch of romance in it— but just a touch. The major center of this book is on Dunya’s coming-of-age story, and how she learns how to stop being so afraid, and stretch herself and explore the world around her. She also makes friends—most notably with the djinn Upalu and reluctant soldier Menir— and slowly and surely becomes more bolder and more confident.

I enjoyed it thoroughly. It’s magical, as well as addictive. I stayed up way past my bedtime reading it on two consecutive nights.

Of course, everything is connected, from Dunya’s headscarf, to Dunya’s mother’s olive grove, to the Sultana’s book of prayers. And the mystery of Zahra’s identity is revealed at just the right moment.

That moment is sublime. That’s the best word for it.

I don’t want to give too much away. The Kindle copy is $9.99, but it’s worth it. It’s got everything I love. High stakes! Adventure! Politics! Road trips! The power of friendship! Some nice world-building and a cool different setting!

This is the perfect retelling of the Scheherazade story. I’m so glad I read it. There are other books being published now that portray Muslims as evil, so it’s a breath of fresh air to find this.

Thank you, Ms. King. This was a wonderful treat.

→ Joanne Renaud
Previous article: REVIEW: Tight Quarters (Out of Uniform #6) by Annabeth Albert
Next Post: READALONG/DISCUSSION of The Master and Margarita, Week 2