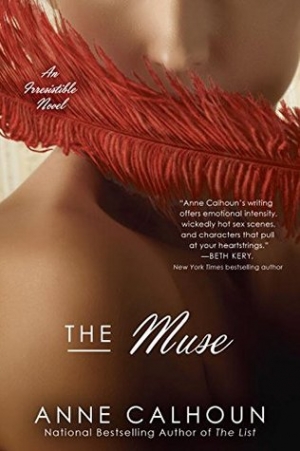 When I finished reading The Muse, my initial thought was that there were not really any words I could put together that would do justice to this story. If ever a novel has inspired a ‘book hangover’ in me, this was it. But as my dazed brain cleared, I realized that I did have a few things I could say that might entice a reader to pick it up, beyond saying ‘It was fantastic! You have to read this!’  These are my thoughts therefore in a more cognizant form.

Firstly, a little background on the story. The Muse is part of a loosely connected series called Irresistible and is the 5th book. They are standalone stories and characters from one appear in other stories generally with smaller secondary roles. The name Irresistible is the title of a lingerie shop in book 4 of the series, Evening Storm. Though they don’t have to be read in order, this story takes place directly after book 4 and comes about as a result of that tale( in which Ryan, a trader on Wall Street, blows the whistle on a Ponzi scheme headed up by Arden’s  father and brother at their family banking investment firm, MacCarren’s).

Arden is the heroine of this story and it starts with that bombshell having gone off, and her trying to pick up the pieces. As a young teenager she was in a serious car accident, and it’s given her a legacy of anxiety and panic attacks. With this disaster, they’ve only gotten worse. She’s desperate to find a way to cope, both with the panic attacks and just in general with the news that has resulted in unwanted and extreme press attention as well as  the stress of dealing with the FBI and the lawsuit against her family and their company.  One way for her to do that is to spend some quiet hours with a few trusted friends (the ones who haven’t deserted her) and when they suggest a drawing class, Arden hopes that immersing herself in the art she used to love doing can calm her mind, at least for a few hours at a time.

It is here that she is introduced to Seth, a secondary character from Evening Storm where he appeared as a bike messenger that Ryan occasionally used. As well as his courier work, Seth occasionally does some nude male modelling, his tattooed and very masculine form a hit on the art circuit. They meet then, at Arden’s friend’s house and it’s safe to say that they find each other intriguing but don’t pursue anything – until Arden hires Seth to come to her house privately for a drawing session and the lines between hired man and employer blur. They end up in bed together, and in your signature style, the sex is riveting and visceral.

He could have been asking about any number of things, permission, affirmation that she liked the direction he was taking things, confirmation that he wasn’t hurting her. It didn’t matter. Her answer was the same. “Yes,” she said.

His mouth landed hot and heavy on her ear, the unpredictable combination of kisses, licks, and nips jolting her from shudder to pliancy and back again. There was no getting lost in what he did, mind wandering to the grocery list, much less spiraling into the barbed wire of anxiety. He commanded her attention as he gathered more of her hair in his hand, baring her nape to his mouth.

She braced her arms underneath her and pushed up. He didn’t take more of his weight but rather made her bear it, giving her something to writhe against. This was real, physical, definitely not in her head. She tipped her head forward, giving him full access to her neck, and felt the position resonate deep in her back brain. Pinned under a bigger, stronger male, oh yes.

Ryan is the epitome of the wounded warrior, a soldier whose three best friends died on his last mission. He’s taken it upon himself to be their replacements back home in an effort to assuage his survivor guilt. So he plays the role of friend, brother, provider – not moving on with his own future but living a transient existence.  He has a trailer to live in, a job as a bike messenger and occasionally as an artist’s model but no thoughts of anything but the present. He can’t let go of the past, and because of this, he can’t move forward into the future.  He exists in this limbo on a day to day basis, until he meets Arden. She captures his attention with her beauty, and her character. And though at first he doesn’t know who she is, he can see that she is wounded like him. When he does find out her story (both from his own internet searching and from her telling him bits and pieces as they begin to see each other more regularly), he admires in her the steel he sees running through her core. She’s gone through some horrible things, like him, but has been able to move forward with each setback. Though she feels that she is weak, he sees her strength.

What draws these two together, besides recognizing kindred spirits, is their love of art. In fact, though Seth is a model, he’s also an artist and when on tour, he carried with him a sketchbook all the time to record the events  that shaped his time overseas. Since the IED explosion that took his friends, he’s been unable to draw.While he poses for Arden and she draws him, he gets the sense that she can really see him, through his facade that lets him be naked in body if not in soul in front of another.

She was watching, her pencil halted, midline, gaze fixed on his hand. He drew his fist up the shaft, slicked the precise around the head, stroked back down. Her gaze trailed up his torso, watched the muscles clench in his abdomen, then continued to his face. Knowing that his face had changed, he wondered what she saw, tried to discern it from the tiny shifts of muscles and the pattern of her breaths.

“That’s good, too,” she said, and resumed drawing, her arm moving in the big sweeping gestures of capturing the essence of a man with his cock in his hand.

It was need, he realized. She showed it in a completely different way, leaking out behind the tight restraints of blank expressions and not reacting. The deeper they sank into drawing and sex, the more she cracked. But he was the one in real danger. She drew him back into his body, made him want, made him feel; both those things would keep him from taking care of the people left behind.

Arden becomes Seth’s muse then, as he picks up his own sketch book in his private time and starts to draw again. He fancies her as a shield maiden, a warrior woman, though one he doesn’t feel worthy of. The juxtaposition of drawing and sex in this story was quite fascinating to me, and as with many books by you, I always feel like I’ve learned something, in this case about the skills and talent required to make a picture come to life. There is lots of discussion about drawing in general in the story in the art classes Arden takes, the discussions that Arden and Seth have,and several drawing scenes.  Some readers might find those details extraneous to the story, but I thought they were an integral part of it.

As the story progresses the tension ramps up. The case against the MacCarren firm spills over into their family’s charity foundation, the one that Arden and her mother have run and the place where she feels she’s made the most impact. The knowledge that all their hard work has been wiped out by the greed of her father and brother is sickening to her. The majority of their family assets will be liquidated to pay back the money that was stolen, leaving her mother a nervous wreck that Arden must also deal with. She will still have money, as a result of her trust fund from her grandmother, but all the work she’s done for the charity, and her day to day job, is gone. Unclear of what to do next, it is in her relationship with Seth that she finds her footing again. Seth on the other hand, experiences the opposite effect. The more time he spends with Arden, the more he realizes that he can’t go on living the way he has been. She forces him to see the truth of his existence and how he’s clung to his dead friends, unable to face the reality of their deaths.  After one particularly intimate experience in which they film themselves having sex (ostensibly to help Arden overcome her anxiety about exposure), it is Seth who realizes just how much about himself has been revealed.

Forced to confront his feelings for Arden and his own walls, when the breakthrough comes, it is a cathartic release of emotion – anger, fear, frustration and loneliness.  But Arden is there to catch him as he falls, and with this, their relationship is solidified. As that happens, their future becomes a little brighter and a little clearer, as they find in each other the home, security, and love they’ve been seeking.

As each story in the series has come out, I’ve found them to be riveting tales that combine powerful sex and emotion intertwined with unique and flawed characters. Every time I think that it’s my favourite, another one comes out to top the previous one and I’m just left in awe, really, at your powerful storytelling. This one gets an A (I’m sure that’s obvious by now), and I highly recommend it. In other words, to the rest of you out there,  ‘It was fantastic! You have to read this!’