Thank you for re-releasing your novella The Mad Earl’s Bride. I missed it when it was released in 2009 in the anthology Three Weddings and a Kiss. The Mad Earl’s Bride has the tone of my favorites of your books: witty, smart, and sweetly sexy. It even has Bertie Trent in it–as well as, briefly, Dain. I enjoyed it thoroughly.

The book is set in the late 1820’s, a time when misdiagnoses and harmful treatment in medicine were the norm. Even more poorly understood and treated was mental illness. 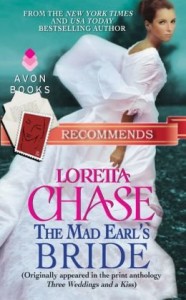 The hero of this story Dorian Camoy, the Earl of Rawnsley, watched his mother succumb to madness, dying of what was diagnosed as genetic defect in her brain, one that could be neither detected nor cured. Her symptoms were these:

She heard voices, … and saw things that weren’t there, and screamed of ghosts and cruel talons ripping into her skull.

Several years later, when Dorian is 27, he begins to suffer from the same malady. The symptoms worsen and, within a year, he is sure he too will descend into insanity and perish.

He’d suspected, early on, that the illness, like his mother’s years earlier, had simply been the beginning of the end.

In January, when the headaches began, his suspicions were confirmed. As the weeks passed, the attacks grew increasingly vicious, as hers had done.

The night before last, he’d wanted to bash his head against the wall.

He understood now, fully, what his mother had meant. Even so, he would have borne the pain, would not have sent for Kneebones yesterday morning, if not for the shimmering wraith he’d seen. Then Dorian had realized something must be done—before the faint visual illusions blossomed into full-blown phantasms, as they had for his mother, and drove him to violence, as they had done her.

I suspect many readers will quickly guess what afflicts the Camoys. In fact, that’s part of the fun of the story, turning the pages and wondering when will Dorian learn why he won’t die? We know he can’t die because he has to live happily ever after with Gwendolyn Adams, the young woman his family insists he marry so that he may beget an heir before his awful death.

Like Dorian, Gwendolyn was born in the wrong era of medicine. In her case, it’s because she desperately longs to be a physician. She’s learned everything society will allow her to; she’s even attended a cadaver dissection at a time when legal cadavers were very difficult to come by. Gwen’s uncle, the duc d’Abonville (the fiancé of Gwendolyn’s and Jessica’s grandmother, Genevieve) who is the nearest male kin to Dorian, has asked Gwen to be Dorian’s bride. She agrees to the deal because, as she explains to Dorian when the first meet,

“I do need the money, to build a hospital,” she said. “I have definite ideas about how it should be constructed as well as the principles according to which it must be run. In order to achieve my goals—without negotiation or compromise—I require not only substantial funds, but influence. As Countess of Rawnsley, I should have both. As your widow, I should be able to act independently. Since you are the last of the males of your family, I should have to answer to no one.”

After arguing against the match but finding himself outflanked by Gwendolyn and Dorian’s closest friend from school, Bertie Trent, Dorian marries Gwen. (The fact that he’s been celibate for the past year is also an inducement.)

Once Gwen is ensconced in Dorian’s home, she sets about first convincing him to talk to her about his illness and then researching its possible genesis. She also treats Dorian as a sane and smart man who just happens to make her swoon. Dorian, now that he has mental, emotional, and physical succor in his life, slowly falls for his wife. Their relationship is lovely.

Though this is a short piece, just 158 pages, Ms. Chase tells a complete story. Her characters have time to develop from total strangers to enamored spouses. The medical aspect of the plot is accurately and richly mined as well. It’s a rare novella that doesn’t feel too brief but The Mad Earl’s Bride does not. I recommend it highly. It gets an A.