REVIEW: The Flame and the Flower by Kathleen Woodiwiss

This is the book. This one started…well, that’s up for debate. It certainly started a new type of romance. Yes, there were romances before TFATF. There were bestselling authors who unabashedly wrote romance, even in the same style as TFATF: The Sheik (1919), Gone With the Wind (1936), Rebecca (1938), Forever Amber (1944). The 1960s was the age of the Gothic. (Apparently an editor looked at the steady sales over 25 years since the publication of Daphne DuMaurier’s Rebecca and wondered if there were an untapped market. In 1960 Victoria Holt’s Mistress of Mellyn was published and Gothics took off.) But the 60s were turbulent times and the sexual tension without the actual sex of the Gothics stopped being titillating. 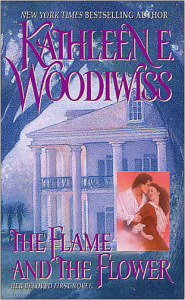 In the early 1970s, Woodiwiss’s first novel was rescued from the slush pile by editor Nancy Coffey. Coffey couldn’t put it down and threw the not-insignificant power of Avon’s paperback marketing machine behind the novel, releasing it as an Avon Spectacular, a paperback original. Initial print run was 500,000 in 1972 and it quickly went back time and again for reprints. In fact, in 39 years, it’s never been out of print.

Avon quickly received other manuscripts from other authors, most famously Rosemary Rogers’ Sweet Savage Love, famously addressed only “To the editor of The Flame and the Flower.” In 1974, then, they published SSL and Woodiwiss’s second novel, Wolf and the Dove. Bodice rippers then ruled; Gothics disappeared.

At this point I’d like to bring up the plot of The Flame and the Flower. Heather is 18 years old, reduced to drudgery by her aunt-by-marriage who is jealous of Heather’s stunning beauty and upset by her Irish ancestry. From this she is rescued by the aunt’s brother, who takes Heather to London to find a place for her as a teacher at a finishing school. This is a ruse, of course: he wants to rape Heather and then install her at the brothel he is part-owner of. Heather rescues herself — in fact, she thinks she’s killed the aunt’s brother. She runs away…and is mistaken for a prostitute anyway and dragged aboard a ship to slake the sexual lusts of Brandon Birmingham, captain of a merchant ship just put into port. Heather is unable to escape this time and Brandon rapes her. She escapes in the morning instead, goes back to her aunt’s house and works as a drudge again until her aunt figures out what Heather cannot: she’s pregnant. Brandon is blackmailed into marrying Heather by the friend of Heather’s father who threatens to impound Brandon’s ship and put him in jail. But in a fit of pique, Brandon vows not to bed Heather again, to treat her like a servant. This is more torture for him, because he can’t bring himself to bed anyone else if Heather won’t have him. Heather doesn’t understand what she’s missing, so she’s perfectly happy with the situation, if it weren’t for Brandon’s unpredictable foul moods.

They sail to America and settle at Brandon’s house, confronting Louisa, the fiancee he left behind who won’t leave him alone. Brandon and Heather slowly, achingly, and frustratingly find their way to each other, despite too many interruptions to count and the machinations of Louisa. A mystery raised in the last 100 pages is solved, Heather and Brandon declare their love for each other, and all live happily ever after in idyllic (slave-run) happiness.

Reaction as a reader? Heather and Brandon act like children. They’re both Too Stupid To Live. They both flounce off in fits of pique. I wanted to slap them both and tell them to sit down and TALK to each other, OMG. They don’t have any conflict that they don’t manufacture themselves. The sexual tension is maintained by interruptions of their hesitant attempts at sex, which is the mark of a very young writer. The pacing is positively glacial. The mystery and suspense also arise because Heather won’t talk to Brandon and tell him all the secrets of her past. The historical details are awful: waltzing in American in 1800?! Men wearing colored coats with embroidery in 1800? Women without any underwear at all?!

Seriously, y’all, I have to take a sidebar here to talk about the underwear. There are no corsets, no pantalets, very rarely a chemise, nothing on under the dresses the women wear. In 1800, even with the much more slender silhouette, women wore substantial corsets, with layers of petticoats and other undergarments. In this book? Nothing. Women are frequently bending over and showing EVERYTHING to the people in front of them. It drove me nuts.

And also? The baths! OMG, the baths. Everyone in this book has a bath every time they turned around. There were more baths in this book than I’ve ever seen. The servants and the heating that must have taken is staggering. Baths on ships! Baths at inns! Baths at home! Baths at the drop of a hat! Water was ALWAYS ready, servants always happy to oblige. Baths baths baths!

However! That plot summary demonstrates one thing: TFATF is NOT your “typical” bodice ripper. Oh, there’s bodice ripping, don’t get me wrong. Literally. But Heather has the Glitteriest of Hoohahs and Brandon can’t bring himself to do the nasty with anyone other than Heather after he has her the first time. Seriously, he has sex with an untried virgin twice, then doesn’t have sex with anyone again for an entire year, until she’s ready to try it again. And Brandon’s Wang is indeed Mighty: it gets Heather enjoying sex too, clueless as she is. Sure, Brandon rapes Heather, but it’s NOT the brutal, multiple raping and pillaging of typical bodice rippers, they’re together for all but 50 pages of the book, and they don’t ever have sex with anyone else. Rosemary Rogers might have taken the sexual tension and the rape of TFATF, but SSL is an utterly different book and I think lumping them together has done the romance genre a disservice for the last 40 years.

I’ll admit: it was a struggle to get through this book. I could not have done it if I hadn’t been reading it for academic purposes. I can read the most godawful stuff if I’m reading to analyze, rather than for pleasure. And trust me, this wasn’t nearly as awful as Coelebs in Search of a Wife (1809) by Hannah More, that I read three times for my dissertation. TFATF is a book by an untried writer. Except for the initial rape, it’s sweet and tender, if frustrating.

But, one way or another, it IS the book that launched a thousand others. One only has to read the messages in the condolences book after Woodiwiss died to see the joy she brought to this world. I dare you to read that with dry eyes.

Grade: C- on its own merits; A for influence.

BTW, if you want to hear more about Mistress of Mellyn or about my theories about The Flame and the Flower, there will be a presentation on each at the conference of the International Association for the Study of Popular Romance this Sunday-Tuesday, June 26-28, in New York City. Please register and join us!