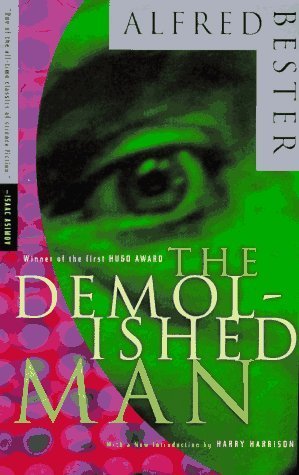 In the year 2301, the wealthiest man in the universe is determined to commit murder in a world in which telepaths are used to detect possible crimes before they can happen.

Recently I have been thinking about some of the books which I first read when I was a child, between ages of eight and ten, give or take. A lot of these books have stuck with me since my youth and have travelled with me to where I am today. I decided that I wanted to attempt to review at least some of them, and this sci-fi classic is first is my first try. I know I read it first when I was very young and then I just kept rereading and rereading. When we came to the US I bought this book in the original and was very impressed at how good the Russian translation had been, and I also learned that it was the first ever recipient of the Hugo award for Best Novel in 1953.

It is hard for me to describe what impressed me so much for the first time in this beloved story because I’ve read it so many times by now. I think the description of telepaths — how they were attempting to govern themselves, how they were interacting with “non-telepaths” or “normal” — were fun. I know the way Bester describes telepathic conversations is still fun for me to read. I tried to find quotes that give a flavor of those parts of the book, but for some reason it just would not work. I am guessing the reason was that the unusual structure of those conversations does not translate into a good quotation for review – some conversations are written in a circle, some like a complicated drawing. The whole book is very linguistically creative, I guess? One character’s last name is spelled as @kins, another as 1/4maine. There are many more examples like this.

But all of this is just a setting for the story – the main plot line is just what the blurb describes. Ben Reich, a charming businessman (well, clearly not that charming) decides to murder his business rival, presumably because that business rival pushed him to the point of no return, overpowered him in many business dealings and then to add insult to the injury refused Ben’s offer of a business merger. So, what’s the solution you ask? The killing of the said rival of course, for the good reasons given.

Here I have to interject something. Over the years I actively sought out many reviews of this book because I was so interested in what other readers thought about it. I could not believe myself when I read a review where the reader made a comment along the lines that clearly Dostoevsky’s “Crime and Punishment” influenced this book. Because of course it did! I have no idea whether Bester did it consciously or it just happened, but it is there, for everybody to see and I did not connect the dots at all before I saw that review. So I want to give the credit where the credit is due.

We have a man who is charming and has a lot of good in him, but who also thinks that he is allowed to kill for good reasons (he is not even trying to come up with reasons that are good for the rest of the society, just for him, but this is not fanfiction of “Crime and Punishment”, this is just taking inspiration from it). And to make things even more interesting, we have a world where telepaths are trying to guard against murders and other crimes, and so far they have done that successfully for seventy years. Nevertheless, Reich is confident that he will be able to outsmart everybody and win in the fight against society. And have I mentioned that he is having nightmares about “The Man With No Face” and really wants to not see those nightmares anymore?

The blurb talks about it, so this is not a spoiler – Reich successfully commits the murder. Enter Lincoln Powell, Prefect of the Psychotic Division of the Police, who is able to read that Reich was a murderer almost right away, but he still needs to collect evidence in admissible form in order to convince the Judge (The role of the judge is played by a Computer) that they have a strong case to convict Reich. Come to think of it, the Computer is probably substituting for a Grand Jury as well.

The problem is that Powell really likes Reich and wants to try everything he can to convince Reich to surrender and save the better part of him.

If you have not read the book, I really want you to experience the plot twists, so I’m not going to talk about them in detail. I mean, if you are a SFF reader, I think the chances of you not having read this classic are small, but I still don’t want to take any chances!

You have to understand, guys, I really love this book. I’ve never written fanfiction and don’t plan on doing so in the future, but I spend hours imagining different endings for some of the characters. I read and reread this story in Russian, I brought the book with me when I came to live in the USA, then I bought the paperback in English in a collector’s hardcover, and when the kindle edition appeared I bought that too. I thought it was creative and fun and influenced so many books which were to come later. I thought that the use of language was often brilliant and the possible redemption story was there too (not that I was completely satisfied with that part).

What I am trying to say is that in this review I am indulging myself and allowing “how I feel about the story” to take a larger element of my grade than usual. In some ways, of course, the book is dated. The 23rd-century society is portrayed so creatively in some ways and in others reminds us more of the US in the 1950s, which is not surprising of course.

The way female characters are represented was lacking to me. Actually, all the characters could have used some more depth (the guys were interesting plot pieces for sure, but more depth would not have hurt).

My final grade is A, but had the book not been on my favorite rereads mental shelf for years and years, I would probably give it a B.