REVIEW: The Deal by Elle Kennedy 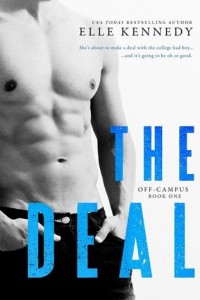 I saw some buzz on Twitter about The Deal and immediately sent an email off to Jane begging for a copy.  I loved this book so hard. The characters grabbed me from the start and didn’t let me go.

Hannah Wells is a 20 year old junior at Briar University in Massachusetts.  When she was 15, she attended a party and was drugged and raped by her date.  By the time the book starts, she has had lots of therapy and is in a good mental place. She has wonderfully supportive parents even though the small town she came from and most of the people in it treated her very shabbily indeed after she was assaulted.  For reasons which become clear later in the story, Hannah doesn’t go home anymore.  Her parents meet her at her aunt’s house in Philadelphia or they come to her for holidays.  Money is extremely tight and Hannah is very aware of the sacrifices her parents make for her to attend Briar.  She has an academic scholarship for her Vocal Performance Music Major but residence and meals etc is still very expensive.  Hannah is a talented singer and hopes to win a $5,000 scholarship at the upcoming Winter Showcase.  If she succeeds, she will use the money to take some of the burden off her parents.

Garrett Graham is the captain of the Briar ice hockey team.  It is his first year as captain.  He is talented and works very hard at his sport.  He is also intelligent and Briar is a college which doesn’t slack on academic requirements for their athletes. If he doesn’t maintain at least a C+ average he will be off the team.  He plans to make hockey his professional career so this is a big deal to him.  He is also a junior and he and Hannah share a Philosophical Ethics class.  The class was supposed to be easy but a new professor has changed things up and, to his horror, Garrett fails his midterm.  Hannah, to her surprise, aces it and once he finds out, Garrett begins a campaign to get Hannah to tutor him for the makeup test the college has forced the professor to grant (as nearly the entire class failed).

Hannah has a crush on Justin Kohl, a recent transfer to the university and the star wideout for the football team.  He is not her usual type but he is gorgeous and she can’t help but sigh over him.  She even plans to actually talk to him. Eventually.

Despite repeated refusals from Hannah, Garrett is eventually successful in his quest to have Hannah tutor him. They make a deal – she will help him pass the midterm make up test and he will take her out to a party where Kohl will be, thus improving her social cred and making her seem unattainable – something Garrett assures Hannah is necessary if she wants a date with “loverboy”.

While Garrett is also gorgeous, Hannah doesn’t initially have the hots for him.  And while Hannah is very pretty and has abundant curves which prove very attractive to Garrett, his interest in her is initially only about her brain.  They bicker and snipe at each other in delightful ways and to their mutual surprise, they become friends. And then more (which is even more delightful).

That gets her attention. She straightens up like someone shoved a metal rod up her spine, then swivels her head in astonishment. “What?”

“Ah. I’ve got your attention.”

“No, you’ve got my disgust. You actually think I want to go out with you?”

“Everyone wants to go out with me.”

She bursts out laughing.

Maybe I should feel insulted by the response, but I like the sound of her laughter. It’s got a musical quality to it, a husky pitch that tickles my ears.

“Just out of curiosity,” she says, “after you wake up in the morning, do you admire yourself in the mirror for one hour or two?”

“Do you high five yourself?”

“Of course not.” I smirk. “I kiss each of my biceps and then point to the ceiling and thank the big man upstairs for creating such a perfect male specimen.”

She snorts. “Uh-huh. Well, sorry to burst your bubble, Mr. Perfect, but I’m not interested in dating you.”

Both Garrett and Hannah completely won me.  At one point (just after the black moment late in the book) I was interrupted in my reading by having to serve dinner and then go to a school function and THEN my husband wanted to TALK to me!  I was so grumpy about it.  And part of it was actually because I was so concerned about these two characters and didn’t want them to be sad a second longer than necessary.  (Because, in my head, if I haven’t read it yet, it hasn’t happened.  I know that doesn’t make sense.  Don’t judge me.)  That kind of reaction to a book is fairly rare for me and it’s one I crave.  I love being swept up in the story and caring about the characters as if they were real people.

It was easy to do in The Deal because both Garrett and Hannah came across as real people.  They way they speak, the way they banter and conduct themselves – it felt authentic.  I suppose one could say that both main characters came across as a little older than 20, but their backgrounds matched with that so I didn’t have a problem with it.  (Garrett’s life hasn’t been all sparkly rainbows either and he has a very difficult relationship with his star-pro-hockey-player father.)  They were mature in their response to studying and the discipline it took to reach their dreams but they talk like 20 year olds and the combination totally worked for me.  It reminded me in all the good ways of Sarina Bowen’s Ivy Years series and Kristen Callihan’s The Hook Up – some of my favourite reads from last year.

Parts of the story follow a well trodden path but other parts surprised me in the best ways.  Garrett and Hannah talk to each other and don’t let misunderstandings get in their way.  I can’t even tell you how much I love that.  When the black moment does come, it is believable and understandable – even though it made me so mad I wanted to spit.  Garrett is cocky and charming and confident and he loves to tease.  But he is also trustworthy, kind, caring and loyal to a fault and the combination makes him feel relatable and not too perfect while at the same time being perfect for Hannah.

Hannah is no pushover.

She stands up for what she wants and isn’t afraid to go head to head with Garrett or anyone else when necessary.  I loved how she advocated for herself through the story and adapted to changes thrust upon her by a demanding duet partner (for the Winter Showcase).   It was good to see Hannah not just surviving sexual assault, but thriving at college and not letting what happened define her.  She still had some rough moments from time to time (of course) and she was very careful about drinking in public and who she hung out with but otherwise was a fully functioning, healthy adult.  Except for one thing.  She hasn’t been able to have an orgasm with a guy – this is something which bothers her a lot and in the end, she asks for Garrett’s “help”.    I suppose some may not like the trope.   I would have been prepared to give it the side eye except by then I was so invested in this couple I didn’t care.  It does seem that Garrett has remarkable success in that department but I felt the way they approach the situation was not only sexy and hot, it was also sensitive and sensible.  I think Hannah was ready and I also think Garrett was right – it was about trust and letting go in orgasm is a very vulnerable space.  So, I bought it – but I admit I really wanted to so maybe I’m not the best judge.

I enjoyed the alternating first person present tense perspectives of both Hannah and Garrett.  I liked the other characters in the story – they felt fully realised; they had a life outside of the story. And I enjoyed the hockey stuff – which even from my uninformed perspective felt authentic and beloved.

“So why do they call it the crease?” Dex asks in fascination after the second period commences. “And why does it sound so dirty?”

On my other side, Allie leans in to grin at Dexter. “Babe, everything about hockey sounds dirty. Five-hole? Poke check? Backdoor?” She sighs. “Come home with me one time and listen to my dad yell Jam it in! over and over again when he watches hockey, and then you can talk to me about dirty. Not to mention uncomfortable.”

There are other things I could say (really, I could gush for so much longer) but they are probably too spoilerish and I want readers to experience the joy of unexpected turns in the story without me getting in the way.

You said on Twitter that you hadn’t originally planned this to be a series.  We need to start a campaign to make sure you change your mind about this (although my hopes are high because The Deal listed as “Off-Campus #1”).  There are at least 5 guys who are desperately in need of a smart, funny girl (or guy) to show them love.  Really, it would be a public service.  Logan, Dean, Tucker, Beau and Justin are counting on you.

There is an alchemy between book and reader.  Sometimes the right book comes along at the right time and everything just clicks into place.  This book did just that for me.  Grade: A.