REVIEW: The Confessions of Young Nero by Margaret George 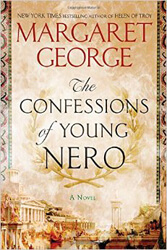 I had the pleasure of being given a copy of your new epic novel, The Confessions of Young Nero. Admittedly I was skeptical about it. As strange as it sounds, I have been a Nero fan as long as I can remember. I always had the feeling he’d been misunderstood, and represented badly in histories written by the pet historians of successive dynasties (rather the way Richard III was written by the Tudors).

I read a lot of nonfiction when I was younger, and I felt I could see glimpses of a much more sympathetic and compelling guy between all the lurid propaganda. He was a brilliant engineer who loved technology and exploration; he decried violence in the arena, and tried to replace gladiatorial combat with plays, concerts and ballets; he was wracked with grief by the death of his infant daughter; and most fascinating of all, after he died he was popularly believed to come back like King Arthur. (L. Sprague de Camp does a decent job of summarizing Nero’s career here .)

Unfortunately, I never really found any satisfactory Nero in fiction. The closest was probably Mary Teresa Ronalds’ Myself My Sepulchre, which is a good yarn, both gothic and deeply romantic, though it has its issues.
However, now that’s all changed. You have written a novel about Nero for both L. Sprague de Camp and myself, and I’m very pleased. (I’m sure Mr. de Camp would be as well.) It’s a bravura performance—sincere, heartfelt and rich. It follows Nero’s character arc, from an innocent child to a brilliant and ruthless sovereign, taking special care with detailing his relationships with the women in his life. At first, he’s raised in obscurity by his tragic aunt Lepida, who had care of him when his uncle Caligula and his cousin Messalina tried to murder him. Then it tracks his relationship with his charismatic, abusive, narcissistic mother, Agrippina, whose use of emotional incest finally bleeds over into the real thing, and ends with Nero taking her life in a way that is ingenious, somewhat unhinged and amazingly amateurish, but ultimately understandable and tragic.

The two great loves of Nero’s life get a lot of attention, and I’m especially pleased with how you portrayed them. I’m picky about books set in ancient Rome—especially in regards to Nero, because of all the clichés that have built up around him over the centuries. But this book passes with flying colors, and I appreciate how savvy it is. It gives a middle finger to all the accepted tropes in Neronian pop culture, i.e. that he was a childish, fat lunatic, or a lecherous tyrant, or God help us, an ancient version of Trump. Nero’s girlfriends also have a horrible number of (often misogynistic) tropes and clichés slathered over them.

For example, Acte, Nero’s first mistress, is usually portrayed, vis-a-vis Quo Vadis, as a Christian doormat inexplicably in love with Nero (Tertullian said one of Nero’s mistresses was a Christian, although there is zero evidence that Acte was one). Thank God, you put the stake in the heart of this shambling zombie undead horse trope, and she’s portrayed as the worldly, clever, practical, pagan young woman she most likely was.

The other cliché you see with Acte, is that she’s a good girl enthralled by a bad boy, seduced and victimized by this wicked young princeling (i.e. Becky Lee Weyrich’s Rapture’s Slave). You get around this by having Acte rescue and seduce Nero, which delighted me to NO END. Yay, agency!

However, for all her heroism and savvy nature, Acte is also less aesthetically inclined than her paramour; there’s even a scene where she snarks about a theatre performance, irritating Nero with her lack of sensitivity, made me laugh. I could imagine a modern Nero breaking up with his girlfriend because she didn’t like Radiohead. Their break-up is imagined as a couple slowly growing apart, in part because he puts her on a pedestal and doesn’t want to reveal the skeletons in his closet, is believable, as opposed to evil Poppaea seducing him.

Poppaea, Nero’s great love, is depicted here with considerable nuance, and his relationship with her takes up the bulk of the novel. We’re a long way from Claudette Colbert as “Poppaea, the wickedest woman in the world” from Cecil B. DeMille’s 1932 film Sign of the Cross. Here, she’s vain and flamboyant, but also smart and sensitive, almost morbidly so, passionate about Judaism and the welfare of the Jews, and deeply involved with Pompeii, her hometown.

I was skeptical of how you might sell the romance with Poppaea, but I was pleased to see the end result. This is a meeting of two (somewhat problematic) souls here, playing out in epic fashion, rather like an Edward and Wallis style love story, but set two thousand years back. George’s Nero is a starry-eyed romantic, in love with love, very much in the mold of his great-grandfather Mark Antony, and fascinated by Antony’s affair with Cleopatra, as well as by the Trojan hero Paris and his affair with Helen (which ties in nicely with George’s previous books). It perhaps feels a little grandiose and idealized, but that fits this character. We’re not going to see Nero suffering from a bad hangover or Poppaea vomiting from morning sickness. It’s all beauty and truth and overwhelming tidal waves of emotion. It’s operatic, in the best way. (I could almost imagine them singing arias.)

All in all, this is a very romantic book, but it’s also, moreover, about surviving the dark tides of history. It’s a spectacular tour-de-force that draws you in to his world… I’ve never seen anything like it, especially in regards to Nero. It’s long, but don’t let that scare you off. It has something of a leisurely pace, but I loved it, and usually I hate anything that might be described as ‘leisurely.’ But it could also be described as seductive. It immerses you in his psychology, and the world he lived in, reveling in a thousand details, like the décor of the Domus Transitoria, or the necklace with nine gems given to Poppaea, his engineering projects, or his eerie, otherworldly visit to the Sibyl of Cumae.

The book is filled with exquisite, jewel-like prose, that is also not too fussy or labored. There is something dream-like about it, but it pulls you along, inexorably. Details build upon details, in a way that reminds me a more modern Oscar Wilde. The whole novel is steeped in aestheticism.

As for the research is quite well done. Ms. George, you do a fine job tying various strands together. The gods, the religion, the omens, the superstition, the more open attitudes to sex combined with that peculiar ancient Roman stuffiness… She wears her scholarship lightly too, and there’s a sureness of touch as well. But it’s not 100%. There is a questionable bit about Locusta’s academy for poisoners, which I found silly, and I was annoyed when she mentioned Wales and the Welsh, but I’m willing to give that a pass, since periods this distant are not easy to write. George really does a stupendous job. I can’t see anyone doing half as well, with a subject this tricky.

This is the first book of a duology, and it ends on a cliffhanger. The Great Fire of Rome is destroying the city, and Nero rides into city, ready to do battle. Dramatic chord! What adventures await our hero next? What will be his downfall? What tragedy awaits?

I do know what will happen, but I’ll be fascinated to see how you handle it. I cannot wait for the next book. Highly recommended!