When readers talk about their favorite books that feature gay or LGBT protagonists, Mary Renault’s The Charioteer is usually at or near the top of their lists. Renault is most well known for her historical novels set in ancient Greece, one of which, The Persian Boy, may be even more well-known and well-loved for its gay characters. Since I avoid fiction set in ancient Greece and Rome, I had no idea that The Charioteer was set in Renault’s own time, and specifically in a period that I really enjoy reading: Britain in the early years of World War II. But the novel was only available in print and I kept hoping it would be released in ebook form. Finally, in the last few months, Open Road Media started making most of Renault’s backlist available as ebooks. As soon as I found out, I emailed them for a copy and they graciously provided one. I cleared some book time and settled in to read. It may have taken me way too long, but the book lives up to its advance billing and then some. I can see completely why it is such an influential and even canonical work in gay fiction. But much of it rings true for contemporary issues and debates as well, not just about homosexuality and social acceptance, but also in the way it talks about war, class, and community. 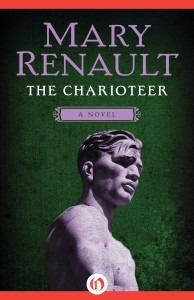 The story revolves around Laurie Odell, whom we meet first as a young child, then as an adolescent student in a public school, and finally (and for the majority of the novel) as a man in his twenties who has been badly injured at Dunkirk and is recuperating in a military hospital. Laurie falls in love with two men: the conscientious objector, Andrew Raynes, who is working at the hospital, and Ralph Lanyon, the former Head of House at Laurie’s school, who was also wounded in the war and lost his command, but who continues in a different capacity in the military. Andrew and Ralph represent different philosophical and practical paths for Laurie; Andrew is shy, innocent, almost untouched (in many ways) and barely aware of the nature of his feelings for Laurie, while Ralph is worldly, sophisticated, and a leader in every social group he joins.

In many ways the novel is astonishingly forthright about its subject matter. Laurie realizes fairly quickly that he is falling in love with Andrew and that his schoolboy adoration of Ralph has transformed into a mature attraction. The language, however, is dense, allusive, and at times very obscure:

At once there seemed never to have been a day when he hadn’t known this; he looked back with wonder at the times when he had waited, in so much doubt and uncertainty, for Andrew to make himself known. How should he confess what he himself had not discovered? All yesterday evening Laurie had been, consciously and subconsciously, using his eyes, and noticing little things; and now, when he looked at Andrew, it seemed written all over him.

If Andrew and Laurie’s interactions are coded and cloaked in the language of friendship, Laurie’s relationship with Ralph is more open. When they meet again as adults and catch up on the intervening years, both talk about their previous love affairs relatively freely. This difference mirrors the choices each offers Laurie: Andrew is the purer, more innocent choice, but also one where Laurie can never be entirely open. Ralph is earthy, experienced, and very much of the world. And the world Ralph inhabits is not one with which Laurie is comfortable. He doesn’t want his sexual preferences to determine the rest of his life:

He kept telling me I was queer, and I’d never heard it called that before and didn’t like it. The word, I mean. Shutting you away, somehow; roping you off with a lot of people you don’t feel much in common with, half of whom hate the other half anyway, and just keep together so that they can lean up against each other for support.

One of the most acclaimed sections of the book is a long party scene, the one where Laurie meets Ralph again for the first time since school. It is a dazzling set-piece, full of a range of characters that represent the admirable and less admirable aspects of homosexual life in mid-20th century England, and one that makes Laurie uncomfortable and conflicted. It’s a brilliant evocation, but it is also harsh and unsympathetic toward certain gay “types,” especially camp characters. The portraits are well drawn but some readers might find the tone difficult to read. In addition, Laurie’s relationship with his mother is pivotal in his life and in the storyline, and there is the implication that the closeness and lack of a father figure affected his sexual development. This treatment is not heavy-handed, and it reflects mid-century explanations of homosexuality, but it can be jarring to the contemporary reader.

Andrew and Ralph don’t just represent different approaches to sexuality; they also signal competing views of war. While The Charioteer is justly celebrated as a landmark of gay literature, it is as much a war novel as a gay novel. Andrew and the other conscientious objectors at the hospital show us the honorable position against war, even a war with as clear an enemy as the Second World War provided and in the face of a real danger of defeat and conquest (the book is set directly after the massive and surprising British setback at Dunkirk and during the time when southern England was experiencing nightly German sorties). Ralph is the committed warrior who cannot understand or stomach any withdrawal from what he sees as a necessary fight. Laurie is in between these two poles, having joined and served without thinking deeply about the issue, but clearly willing to participate. Renault also shows us how class differences could be diminished in the face of shared war experience: Laurie’s best friend at the hospital is the working-class soldier, Reg, who looks out for Laurie (and for whom Laurie takes a big risk).

The three main characters are portrayed with depth and complexity. Andrew sometimes feels like more of a representation of philosophical and ethical positions than a fully realized person, and Ralph is overwhelmingly admirable and larger than life, even in his flaws. But Laurie is as well depicted a character as I’ve ever encountered in a novel. He’s at times frustrating, and at times obtuse, but his journey is utterly satisfying. And the large cast of secondary characters are equally well drawn. They are vivid even when their appearances are brief, except for some of the gay characters, who sometimes came across as too stereotypical.

While this is not a genre romance, there is definitely a happy-for-now ending, even though getting there is quite a roller coaster ride. The ending is extremely abrupt by romance standards, and there’s no epilogue, but you do know where everyone stands at the end (and who they stand with). I found it to be a highly satisfying conclusion, but I’m less bothered by abrupt endings than many readers.

The writing is beautiful, but you can’t rush through this book. Given the era in which Renault was writing and the difficulties in writing about homosexuality, much of the language is elliptical; if you aren’t paying close attention you won’t notice that there are sex scenes. And the story is as engaged with questions of morality and ethics as it is with love; or perhaps it’s more accurate to say that questions of love are bound up with questions or morality and ethics. But it’s also a passionate, emotional, and deeply moving book. I can see why it has resonated so deeply with so many readers, not just gay men, for obvious reasons, but with anyone who has grappled with dilemmas about how to live an honorable life and how to reconcile desires that appear to be contradictory. Read slowly, immerse yourself, and you’ll be profoundly rewarded by the experience. And you’ll probably want to read it again. And again. Grade: A.