I picked up your book because I saw a Tweet about its release that indicated a book that could fit into the NA category while containing an LGBTQ protagonist and/or romance within the story.  Your debut novel, Hushed, also contained these qualities – I haven’t read it, but aim to after Suicide Watch.  This book was impressive and completely different from other NA books that I’ve read recently.  Its characters are no rock stars or introverted college students getting introduced to The Wonder of Good Sexytimes.  They are damaged individuals that are on the cusp of legal adulthood, if not already there, that struggle with depression and suicidal thoughts.  Suicide Watch is what I’ve wanted to see in NA since it began. 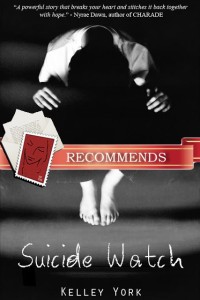 Eighteen and ready to leave high school for good, Vincent Hazelwood is one more guy screwed over by a life in foster care.  Caring about grades and a social life seems pretty pointless when you’re used to being juggled from one house to another.  Eccentric Maggie Atkins is the best thing to happen to Vincent; she has actually given him a home to love and a chance to finish high school and do something for himself.  Vincent hasn’t known a lot of love in his life, but Maggie is a wonderful exception.

Her death, caused by a sudden heart attack, sends him into a spiral.  He only has a little bit of time to find an apartment.  She leaves him all of her assets so that he can make a life for himself and hopefully pay for some kind of college education.  Maggie’s death gives Vince the chance to see just how much Maggie cared for him, yet he’s paralyzed by her absence.  No matter how much she loved him while she was alive, it seems like she was preparing to die without telling him.  Now, Vince is alone, and he can’t cope with it.

Around this time, Vincent comes across a website dedicated to those fascinated by the act of suicide.  The website includes an active forum filled with members of all types and a section where people have actually submitted pictures of live feeds that ran during the suicide attempts.  It’s morbid, yet Vincent finds a certain amicability in conversing with people that understand where he’s at emotionally.  He is unsure of suicide; he is sure about having the desire to do it in his current state of affairs.

Vincent soon makes friends on the website: Casper, a girl suffering from cancer that is tired of getting endless treatments without a moment of health in sight, and a boy that sends lyrics to his favorite songs as a way of communication.  Vincent was long abandoned by his few close friends, so Casper’s presence in particular is a welcome respite from his lonely thoughts.  They even dare to meet in real life, bringing their friendship to a dangerous level of reality.  Casper even introduces Vincent to Adam, the boy of the song lyric messages that is surprisingly cute and painfully shy.  The three misfits become friends as Vincent starts to become independent, moving into an apartment and finding a small bit of life outside of his depression.  Each of the teens finds that depression and suicidal tendencies still rear their ugly heads in every which way.  Loving each other may not be enough to help get them through, especially if they are truly done with their lives.

This book reminds me of a snippet of lyrics from a Panic! at the Disco song that uses the phrase “beautifully depressing”.  That is Suicide Watch.  It isn’t a romance in the traditional sense; there is no focal point of Adam and Vincent finding love and an appreciation for an adult sexual relationship.  Well, there is, but it’s not the main point of this book at all.  This book is more about friendship and dealing with the complexities of having depression and being suicidal, and I’m okay with that.  If anything, I think that NA needs to focus on these things more because they are a big part of life in any context.  Suicide Watch just addresses it in a way that is not preachy or focused on the message – it addresses it as something that can occur gradually, in a variety of environments, as something that can be a universal experience.

Vincent’s narration spoke to me because it is simple but, at the same time, exceptionally detailed.  It focuses on the events that go on in his life without a boatload of introspective bullshit; he doesn’t spend hours upon hours detailing his depression and suicidal thoughts like they are the only thing going on in his mind, like this book is just one giant homage to just-graduated teens that get overwhelmed by life’s sadder moments.  Vincent feels alone, and it’s easy to see how that feeling is created after Maggie dies and he is confronted with living by himself.  His former best friend doesn’t have the time to talk with him.  Maggie’s lawyer tries to act like a caretaker but comes across as being yet another adult that’s trying too hard while bringing news that leaves Vincent anything but confident and collected.  Finding Caspar and Adam is a huge, bright moment in Vincent’s life, and it starts a character arc that is subtle and beautifully expressed as he comes out of his shell piece by piece.  Vincent learns to live life again as the people around him contemplate dying.

This character arc is why I loved Vincent as a narrator and a main character.  He’s sensitive, articulate, concise, but manages to weave a lot of subtext into what he says.  I could tell he suffered from depression without being told.  He represented something that I had seen and experienced a lot: a person silently dealing with their depression.  Teenagers are so often silent about it that it would make sense to turn to the internet and to avoid discussing it even with peers who understand it.  There’s so much more to it than angsty writings, self-harm, and botched suicide attempts.  It’s never quite so obvious as the more message-y books make it out to be.

Oddly enough, your other characters feel just as real as Vincent.  It’s rare – in YA, NA, or category-length romance novels – to have a feeling that every character is well-rounded.  Caspar was probably the most beautiful characters that I’ve read about in ages.  She’s visceral, aggressive, and intense about living her life until she’s ready to end it.  She doesn’t use her cancer as a crutch for her emotions, just as an explanation for how she got to her current emotional state.  There’s  a barrier between her and her friends, yet the reader still gets to know her well.  Readers going in expecting a Lurlene McDaniel-like twist of total-tragic-death will be surprised at how the arc is handled.  It’s not particularly pleasant, but it’s also not the usual way of doing things.  You don’t pull punches with Caspar’s character; I appreciated that even when I was utterly shocked at what happened.

There’s something to be said for Adam, too, and what both he and Caspar represent.  As much as Vincent’s experiences are used as a reference point for his emotional loneliness and dependency, Adam and Caspar both come from more privileged backgrounds and still manage to be depressed.  There isn’t a class divide or a sense of one character’s issues being more important.  They all mutually discuss their emotions as a singular type of emotion rather than grade them based on personal tragedy.  Adam’s mother is awful and emotionally removed from him while Caspar’s parents are extremely loving.  That level of removal is what drive’s Adam’s depression.  What I also love is that both Adam and Vincent are LGBTQ without stressing that as a point of depression.  LGBTQ teens do struggle with it more than most, yet it’s never something boldly connected as a cause.  Both teenagers are comfortable in their sexuality to a fair degree.  In Adam’s case, it’s the way his sexuality is perceived by his mother that gives him some problems.

How do I convince people to read this book when it’s so sad?  Sure, it’s real, but readers like me that normally enjoy romances with clear endings may find the undercurrent of tragedy in this book too depressing.  I think that this book’s inherent beauty is the reason to check it out, more so than the LGBTQ characters or the unusual plot for an NA novel.  The writing drives to the heart of the matter in a way that is unfailingly honest.  Adam and Vincent grow to love each other without pomp and circumstance and create a romance that the reader believes in; the three characters have individual struggles with the same general emotional problem, never once feeling like author-controlled messages; the book moves along at a pace that is perfect and quick.  My only real issue with the novel from a writing perspective was the way that the subplot with the website admin faded in and out without much direct connectivity to the rest of the story.  It wasn’t silly or perfectly tied up, but I think it would have helped to make the motif of periodic emails and posts from the admin a bit stronger throughout the narrative.

Suicide Watch is just a gem.  It’s a quick read that packs a bigger emotional punch than I would have ever anticipated.  I can’t recall the last time that a book about so many dark issues has truly captured my every emotional facet.  Vincent’s a great narrator, and the strong focus on friendship and mutual understanding of suicide is unlike anything I’ve read in New Adult.  I wish that every issue book tackled things with this much honesty and understanding.  The only downside is that this book is very sad in its beauty.  Even when it’s hopeful, the reader is reminded of the events that allowed that hope to grow.  This book was beautiful; it made me cry.  A