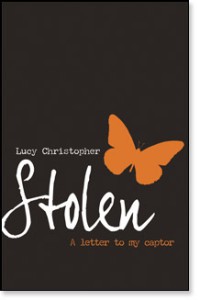 Books published through the Chicken House imprint are a mixed bag for me.   I fell in love with author Cornelia Funke, but didn’t really care for the Tunnels series.   I don’t know what it is, but international authors sometimes do not gel with my reading pleasure.   Picking up Stolen, I had minor fears that you would be one of those unfortunate international authors.   The simplistic copper butterfly on a black background was tempting, and on opening the book to the silhouette of a snake on one page, another butterfly on the next, I was enraptured.

In an airport, ready to fly to Vietnam with her parents, Gemma is stolen.   Everything appears okay.   She’s just about to board her plane and leave.   Until she meets Ty.   His comfortable blue eyes and handsome exterior draw her in.   Gemma sits down and shares coffee with him, reluctant to leave with her parents so soon.   Something unnerves her, however, and before she knows it, she is drugged.   Stolen.

Gemma isn’t lucid for a long time.   When she wakes up completely, she’s tied to a bed.   By Ty.   In an endless wasteland; a desert.   Definitely not Vietnam.   With no cell phone or way to contact her family – or escape – Gemma has to try and survive with Ty.   He says he won’t hurt her, but the fear is always there.   Along with that eerie feeling that she had seen him somewhere before.   But that’s impossible, right?

Stolen is the tale of a girl and her captor; of isolationism and a fear that grows into something indescribable.

A novel like Stolen is unique in it’s ability to be both horrifying, eye opening, and honest.   There is nothing unbelievable about this book; nothing left to a simple plot device or character malfunction.   Every word, paragraph, and page is cold and calculated like Ty himself.   Many times throughout my reading, I can remember the feeling of my stomach contorting into knots; of fear trickling in as Gemma would try and escape, or think about her death.

Gemma herself is a heroine that is vivid and complex.   Her strength and vitality are combined with parental issues and the need for a figure that outwardly shows caring in her life.   She is the type of heroine we want to succeed in escaping.   Screw the rest of the book.   We want her out of his clutches by page one.   Her dynamic with Ty, her captor, is also finely tuned.   Ty is so sly that even the reader falls for him.   The opening scene breeds distrust and contempt, but soon, as he seemingly shows unfaltering adoration and honesty towards Gemma, the reader and the protagonist are slowly seduced into feeling comfortable with him.   Liking him.   Maybe even romantically falling for him.

Of course, that’s only when he isn’t doing something clinically insane.   With his own past problems and mental instability, Ty is a character that will befuddle yet interest the reader.   Do we want Ty to go to jail, or do we want him to convince Gemma to stay with him and become one with the Australian outback?   You make the reader fire question after question at themselves, never once making the message easy or even solvable.

A scene where Ty takes Gemma out to capture a camel (let it be noted I had no idea camels were in Australia) to use for an unknown purpose really stood out as being funny yet still showing your sense of drama:

You pulled the pole over your lap and out of your window.   The noosed end was pointing at the camels.   You were looking them over carefully.   Sweat was pouring off of your face.   It was pouring off mine, too, despite the breeze rushing past me.

You started to lean out of your window.

“Take the Wheel!” you ordered.

You didn’t give me much choice.   As soon as you shouted it you were gone, leaning dangerously out of the car, which started to bank toward the camels.   If it kept going like this, your head would probably crash into the back end of one of them.   I was tempted to let it.

The entire metaphor of the capture, bonding, and eventual release of the camel was well done, and paralleled Gemma’s own struggles flawlessly.   The slow build of affections toward a pet and the eventual abandonment really did well for the end of the story, and made the emotions seem even bigger. Symbolism like that is usually lost on me, but your ability to weave it so well into the story made it easy to notice after some thought.

Writing Stolen as a letter from Gemma to Ty following their time together is what really made it a great novel.   I had no problem getting into the story, and the particular feelings that come off from something as personal as that kind of letter made a great frame for the rest of the book.   The style managed to be dark yet carried a level of   hope, and reminded me of one of my favorite books, How I Live Now by Meg Rosoff, which also contains a love story that is by many standards confusing and creepy.

It’s been a long time since I’ve read a novel so open and brutal in it’s realism of character and relationships.   To the very end, where the reader still cannot comprehend if Gemma’s feelings for Ty are genuine, or if she suffers from Stockholm syndrome.   It’s a puzzle I don’t think I’ll ever be able to solve, but that’s just the kind of feeling I want when I leave a book.   The feeling of being able to think about it long after I’ve read the last sentence.   You have written a novel that will resound with teenagers and adults a like, and shed light on the complexities behind isolationist relationships…and of being stolen.   A