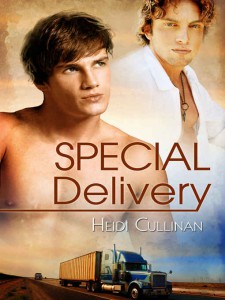 Ann Somerville, knowing my predilections, recommended your book to me and I’m SO glad she did. I have to commend Dreamspinner Press for finding some of the best m/m romance authors out there. I’m certainly adding you to that list.

Sam is 21, orphaned, living with and working for his awful aunt and uncle, trying to work his way through school part-time to become a nurse. But he also has sexual desires, needs even, that shame him:

IN THE deserted men's restroom at the back of Middleton Community College, Sam Keller knelt on the tile, braced his hands against Keith Jameson's thighs, and broke his mother's heart.

It didn't matter that Sharyle Keller had passed away four years ago. Sam knew his mother would feel that what Sam was doing in the handicapped stall was a complete and total mockery of everything she'd ever taught him. It wasn't that she would have been upset that Sam was gay, or even that he was about to give a blow job at school and risk expulsion for "sexual congress on campus." What would have upset his mother was that Sam wasn't at all attracted to his partner. To be perfectly honest, Sam hated him.

"Sex is beautiful," Sam's mother had told him. ""Sex is a union between two people. Sex is a merging of souls, a holy connection. Sex is sacred, and it should only be given to those you love." [ . . . ]

[ . . . ] But even before he'd realized what an incredible dearth of loving male partners there were to be had in Middleton, Iowa, Sam had struggled with his vow. His mother had found him gay support groups and sex tip sites online, but Sam had found the porn. He'd lost days in the images of beautiful, slender men bent in submission and sometimes degradation, and to his quiet horror, he realized that this was his fantasy: he, like those boys on the Internet, wanted to be used. He wanted to be loved and cherished, yes. But he also wanted to be fucked. Sometimes he didn't want it to be about love. He wanted it to be about sex, and about semen, and about not quite exactly being in control. He didn't want to get hurt, no. But he admitted to himself that he wanted to come really, really close.

Sam knows what he likes, but he’s ashamed of it and he thinks he shouldn’t like it. And then he meets Mitch who also knows what he likes and is also ashamed of it and terrified of messing things up with Sam, who he recognizes as special, the way he’s messed things up with previous relationships because of the kink. So they both desperately want the hot, dirty sex, and are both ashamed of it, but can’t stay away from it. Perfect conflict.

And that’s another thing I love. The conflict has nothing to do with the fact that they’re gay. The conflict is the *other* type of “wrong” sex they like. Our society is fucked up about sex and I love how this book shows that and also shows how good and right it is to do whatever you want so long as there’s consent and enjoyment all around.

Mitch is a truck driver delivering supplies to the store next to Sam’s uncle’s pharmacy. They have sex in Mitch’s truck, have some phone conversations, meet up again, and then a few weeks later, Sam has a terrible falling out with his aunt and calls Mitch, asking him to take him away. The rest of the story is a road romance as Mitch and Sam drive all over the West on Mitch’s deliveries. They eventually get to Las Vegas and confront Mitch’s past, in the person of Randy, an…ex-fuck-buddy? (They both explicitly reject “lover” and “boyfriend” as descriptors of their relationship.) Sam knows that he and Mitch need to deal with Randy in order to have any future, even if Sam doesn’t see how they CAN have a future anyway.

I mostly love how the relationship is front and center in this book. It’s very much like a category romance in that respect. (That comparison was heightened for me because the story’s told in deep 3rd-person POV solely from Sam’s perspective.) I love how things aren’t perfect between them because of their own emotional hang-ups and their failure to communicate. But then they do talk and work that problem out — so it’s not a teacup storm — but then another one crops up, in a completely realistic way. For example, they have hot kinky sex one night, Mitch freaks out and thinks he’s gone too far, so tries to be “normal” which just freaks Sam out, because he’s all about the kinky sex. Sam’s freak-out makes Mitch think he’s right about having gone too far and he freaks out more. They talk it out pretty quickly, but it’s all part of the steps of tentative progress to self-understanding and strong relationship. At the end, I’m completely convinced they’re totally in love and that they’ll make it, but I also know that they’ll have to work hard and keep talking and that just feels so RIGHT to me because that’s exactly what real life is like.

This is a fabulous little story. I pretty much can’t recommend it highly enough. If you like K.A. Mitchell, I think you’ll love this book. Same type of character-driven romance. Same hot hot sex. And the ending is, I think, the first full-on proposal scene I’ve seen in a m/m romance. :)

And Randy’s book is out too and I’m very much looking forward to reading it (although it looks more suspenseful, so I’m hoping I still like it).