REVIEW: Song of the Navigator by Astrid Amara 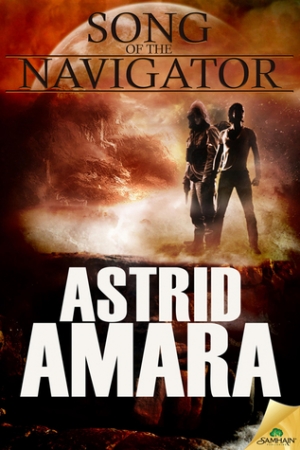 Worst Possible Birthday: Being sold into slavery by none other than your lover.

Tover Duke’s rare ability to move anything instantly across light-years of space makes him a powerful, valuable asset to the Harmony Corporation, and a rock star among the people of the colonies. His life is luxurious. Safe. Routine.

He has his pick of casual hookups passing through Dadelus-Kaku Station. His one brush with danger of any kind—the only bright spot in his otherwise boring life—is Cruz Arcadio, a dark-haired, hard-bodied engineer whose physical prowess hints he’s something much more.

When a terrorist abducts Tover, hurling him into a world of torture, exploitation and betrayal, it’s with shattering disbelief that he realizes his kidnapper is none other than Cruz. As Tover struggles to find the courage to escape his bondage, he begins to understand the only way to free his body, his mind—and his heart—is to trust the one man who showed him that everything about his once-perfect life was a lie.

Warning: This story contains descriptions of extreme violence and assault. It also contains graphic sexual depictions. It also has a lot of birds. And pirate movies from the future. And romance.

I think you are a great writer, but your artistic choices do not always work for me.  So when I saw the book being available for preorder on Amazon I was excited, but also worried – *very worried*.  The blurb gives the main reason for my worrying. If one romantic lead in the book does something terrible to another character and the writer tries to justify it to me as “the reasons are good and noble and they will save mankind, so the other character should just learn the reasons and suck it up,” then I, to quote my fellow reviewer Kaetrin, tend to “get stabby”. I can get very stabby and bloodthirsty on behalf of the wronged character. The blurb describes a set-up which sounds suspiciously close to what usually invokes a strong negative reaction from me.

Of course I preordered the book anyway, because I love your writing. And then Ami at Booklikes gave your book a glowing review and after interrogating her about some spoilers I decided that I need to read them all and now. When I saw that the paperback was already available, I had no patience to wait till May 26 and bought it too. This review is based on the paperback copy.

Tover is a navigator; he moves people and cargo across time and space. His skills are so rare and so valuable that we are lead to believe there are only 3000 navigators across the whole Universe. Later we learn that there are only *forty two* navigators in the whole universe who are as sensitive to the vibrations that help them do their work as Tover is.  He has luxury accommodations, a good salary, and everything is the best available, all from his employer, the “Harmony” corporation.  As the blurb tells you, his life is a safe routine until his casual lover Cruz Arcadio kidnaps him one day and sells him to the pirates.

As much as I do not want to tell you spoilers, I have to share that Tover is physically abused at the hands of the pirates – chapters two through four are hard to read. There are graphic descriptions of physical violence, although there is no sexual violence, not at all.  I also have to share that Cruz had reasons and he saves Tover from the pirates a month later, taking him to his home planet to recuperate.

I was so pleased with how the whole situation was handled. I was so happy that I did not have to look at the page and wonder why the guy who was betrayed so horribly by his lover suddenly forgot all that and everything is good because they are having amazing sex. Tover is angry, he is allowed to be angry and he is allowed to express his rage, as often as he wants to. In fact I was kind of amused that Tover did exactly what I imagined doing to Cruz after I have read the blurb.

“Rage roared through Tover. He grabbed the holoscreen between  his legs and hurled it at Cruz’s head . It missed. Cruz said nothing.

Tover reached up and grabbed the first thing he found on the shelf above the bed, a basket, and flung it at him. Cruz ducked but the basket clipped him on the side of the head. Cruz frowned but he didn’t get up.

Fury and heartbreak coalesced into something irrational, and Tover started grabbing everything he could reach and hurled things at Cruz’s face. Cruz sat there, expressionless, dodging junk that crashed against the wall, against his chest and arms, the noise filling the darkening house.

Tover’s heart raced. An entire life had been born, aged and died since Tover was last alone with Cruz, and as Tover tossed items at Cruz’s head, the culmination of over a month of murderous rage filled him.

Tover picked up a gray-colored vase full of dried flowers and pulled his arm back to toss it. Cruz instantly animated, leaping out of his chair with his hand out, eyes wide.

“No! Don’t break that, my mother will kill me!”

It was also really important to me that Cruz did not leave Tover at the pirates’ hands to be abused. Yes, it was his fault, but because navigators are so valuable and precious he did not think that they would do anything to Tover except make him work as a navigator. But I really liked how Cruz, while wanting to explain his reasons to Tover, did not try to justify anything that happened to his lover and fully accepted the blame.

“Fuck you.” Tover shook his head. “Why help me now, after everything?”

Cruz did not answer for a long time, and when he did, he spoke quietly, his eyes a little glassy. “Because you are a rare, beautiful flower.  And I crushed you under my boot”.

Now while I thought this was well said, be rest assured that Tover is no damsel in distress and he bears the hard circumstances which life threw at him with as much dignity and strength as he can master. Certainly he leads a privileged life because his talents are so rare, and he has to learn and change his perceptions about a lot of things, but he shows the ability to critically look at those things, even if they are not easy for him to accept right away. The worst blow to him was Cruz’ betrayal, because of course both men grew more than casually attached to each other during the beginning of their affair, before Cruz kidnapped him. I really liked the guy and wanted the very best for him. I liked Cruz too, I certainly did not expect being able to forgive him – and not because I thought his reasons were not good and noble. If I did not think his remorse was genuine, I could care less about his reasons – the history of the country I was born in taught me all too well where the revolutionaries with the best intentions usually end up on human rights; therefore, I only buy “saving the world” reasons when one tries to not drag people in the “happy future” against their wills. Cruz certainly tried hard not to do that and I appreciated that, because of course his world needed saving (reasons!) and I was glad that Tover learned to see that too.

These two were just so good together, I cherished every interaction between them – angry, happy, not so happy, them learning more about each other. I liked them and I ended up so happy and satisfied at the end.

The world building was wonderful – no information dumping at the beginning, everything was seen through the action, things were constantly happening and through that the reader learns more and more about the world. There were dark things happening but there was also this:

“Towards the bottom of the valley, Tover found hundreds of nests. Although they were predominantly on rocky outcroppings, several birds had theirs on the sloping ground, which suggested to Tover that they had few natural predators.

The birds watched as he approached but didn’t take flight, so he moved slowly and sat down on nearby rock, going very still. He paused a few feet from the nearest nest. He could see the birds up close now, and they were tremendous. They clearly got their name from their ridiculous beaks. Long and curved down at the peak, the beaks were a shocking pink in color. A knobby, yellowish protrusion between the eyes took up almost the same length as the beak. The birds’ feathers were bright, ruby red.”

Tover loved birds. How can you not like a character who can watch birds for hours?

There are some wonderful female characters in this book too, which I always like. In fact I liked everything about this book – a lot.