Many moons ago, Dear Author posted a debut author interview for Madeline Miller’s Song of Achilles. That didn’t intrigue me as much as Booksmuggler’s adoration for the book (word of mouth and hand-selling, right?). That got me intrigued enough to use one of my monthly Audible credits to buy the audiobook. So this review is both of the book itself and of the audio version. I have not read the actual words–I just listened to them.

Oh, disclaimer: As most of you know, I now work for Riptide Publishing (about to go full-time May 1!), which is an LGBT romance publisher. But I have no connection whatsoever to Madeline Miller. I’ve never been in contact with her. I bought the book with my own money (well, Audible membership credit). I have no expectations that she’ll ever publish with Riptide because it took her ten years (OMG) to write this book. I just wanted to squee about this book because I loved it so much. :)

Publisher blurb (I now know how much effort goes into these damn things, having written more than a few myself. Good lord!):

Greece in the age of heroes. Patroclus, an awkward young prince, has been exiled to the kingdom of Phthia to be raised in the shadow of King Peleus and his golden son, Achilles. “The best of all the Greeks”—strong, beautiful, and the child of a goddess—Achilles is everything the shamed Patroclus is not. Yet despite their differences, the boys become steadfast companions. Their bond deepens as they grow into young men and become skilled in the arts of war and medicine—much to the displeasure and the fury of Achilles’ mother, Thetis, a cruel sea goddess with a hatred of mortals.

When word comes that Helen of Sparta has been kidnapped, the men of Greece, bound by blood and oath, must lay siege to Troy in her name. Seduced by the promise of a glorious destiny, Achilles joins their cause, and torn between love and fear for his friend, Patroclus follows. Little do they know that the Fates will test them both as never before and demand a terrible sacrifice.
Built on the groundwork of the Iliad, Madeline Miller’s page-turning, profoundly moving, and blisteringly paced retelling of the epic Trojan War marks the launch of a dazzling career.

When I was about twelve or so, my parents asked me what I wanted for a gift-receiving occasion. I said “classic” books. So I got a copy of The Iliad, because my parents were awesome like that and it doesn’t get much more classical than that. But it’d been a while since I’d read it. I know the story, of course. The Trojan War last for ten years. Achilles is the Greek Hero, better than anyone else, and protected by his goddess mother. Eventually, though, Achilles’s best friend, impersonating Achilles because Achilles is pouting that Agamemnon took his slave girl from him, is killed by Hector, a Prince of Troy. Achilles then goes after Hector in revenge and kills him, dragging his body around the city walls. But then Achilles is killed by Paris. So I knew this would not be precisely a happy book, considering everyone the narrative followed was going to die. But it’s the in-between that’s important. 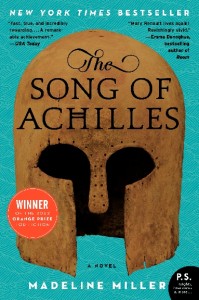 The plot hinges on the point that Thetis, Achilles’s mother, was told that Achilles would die in the war, but he’d lose his godlike powers if he didn’t go. But she was also told that he’d die after Hector (of Troy) died. So his refrain throughout the story was “Hector’s never done anything to me, there’s no reason for me to kill him.” Except the reader/listener just KNOWS that Hector will kill Patroclus, which, of course, is the one thing that will destroy Achilles. When Greek audiences went to watch theatre, they knew how things would turn out. But they were there for the emotional catharsis of HOW it would get to where they knew it was going. And that’s what this story felt like. I knew what was going to happen, of course, but the process of HOW it happened made all the difference.

And besides the sublime language (and oh, it’s so beautifully written, so spare and sparse in it’s sublimity), it was the how that kept me listening. The book was a study in two different types of masculinity, one that was seen to be ideal by all of society (Achilles), and one that kept the other in check, kept the other human (Patroclus). Because this story is that of Patroclus, not Achilles. It’s told from Patroclus’s first person POV (quite a trick after he’s dead, but the narrative manages it brilliantly). And Patroclus is Achilles’s chosen boon companion. They have been together since they were boys. Patroclus was disgraced and exiled to Achilles’s father’s household to be fostered after he kills another boy (by accident). He has no family, no friends, and when Achilles chooses him, he follows. The boys fall in love and commit to each other above all others, but they couldn’t be more different. Achilles is the son of a goddess, golden and brilliant and the best warrior the Greeks have ever or will ever see. Patroclus is a terrible warrior. He is a healer. Achilles cares about his reputation above everything and loses sight of human connections and the human cost of war. His name is everything to him. Patroclus is literally nameless, and all he can see is the human cost of what “heroes” perpetrate on the world around them, the human cost of the wars: the women captured as prizes, the men who he has nursed back from wounds who die in the next battle. He is nameless and content to remain so, except in that it keeps him apart from his beloved Achilles. The contrast between a Hero only concerned with his reputation and a nameless exile concerned with real people is stunning. The inevitable clash between these two men who adore each other destroys everything they care about.

And yet their love shines through everything. Their devotion to each other is inassailable and makes it worth dealing with Achilles’s ego. Because his ego is nothing compared to his love for Patroclus, except in that it charts the course of both their lives in ways that are inevitable from before they even meet. Just the way a good Greek epic should be.

Things I missed or wish were different:
I wanted to know why Achilles chose Patroclus as his companion in the first place from among all the boys who would have been happy to be his companion. Maybe I missed it. It seemed that he chose Patroclus because Patroclus asked him to lie for him. But…I’m not sure. It makes a good excuse to listen to it again, to see if I can figure out exactly why.

I wished for more explicit sex. The closed door and the euphemistic sex was disappointing. And that might just be because of what I’m used to in reading m/m romance, but it was still…well, frustrating. Narratively frustrating, I mean. Patroclus shared everything. It seemed odd that he skimmed details when he and Achilles actually made love.

Also, there were way too many dialogue tags. “He said”s and “she said”s littered the text where they weren’t necessary. They became intrusive, especially as I was listening, because the narrator did SUCH a good job with distinguishing the characters, the tags were utterly unnecessary.

The audio book: (Link)
Frazer Douglas was brilliant. Just amazing. His voice was perfect for the atmosphere/tone of the story. I LOVED how he used different accents from the British diaspora to indicate different people. The asshole was South African–that pleased and amused me mightily. There was a Scotsman. Odysseus’s accent was mild but fascinating. He did old and young very well. He even did women without being grating (not that there were many of them). His Thetis was chilling.

Final word:
I’m not sure I’m doing a very good job of explaining how amazing this book is. The story itself is brilliantly told, surprising and exciting, even while being as obviously inevitable as an avalanche. The language is exquisite, the descriptions unexpected and yet so smooth, so beautifully exquisite. The characters are so well-drawn, so real and alive and yet definitely foreign to us. I loved how Miller took the myths at their words and had gods roaming the earth and Oracles that everyone believed. I’m probably going to start listening to it again tomorrow because it soothes me.

And even with all the tragedy and death and destruction, it had an optimistic, HEA-ish ending that’s totally worth hanging out for. I don’t think I can say enough good things about this book. Go and get it. Read it. Revel in it’s beauty and its applicability to our world. Who gets to define “masculinity”? Who gets to say what defines a “hero”? This book problematizes those questions by showing two versions of heroism that are fundamentally incompatible, but can’t exist without each other.