Warning: mysqli_query(): (22032/3141): Invalid JSON text in argument 1 to function json_contains: "Invalid value." at position 0. in /home/customer/www/dearauthor.com/public_html/wp-includes/class-wpdb.php on line 2187
 REVIEW: Something About a Cowboy by Sarah M. Anderson
June 23, 2015

REVIEW: Something About a Cowboy by Sarah M. Anderson 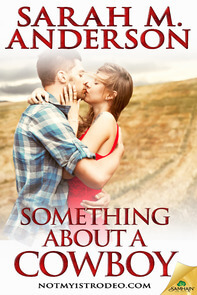 NOTE – This may be bought separately or as part of the NotMy1stRodeo Anthology.

After six years working his ranch and raising his boys, widower Mack Tucker
is staring down the barrel of another long, lonely winter. Until his grown-up sons
decide it’s time for him to move on. They not only sign him up for an online dating site, but also screen the first batch of interested parties.

Mack is furious—until he spots one of the profiles. He’s intrigued.
Intrigued enough to drive three hours to Billings to meet Karen Thompson.

Burned by her ex, Karen isn’t interested in diving into another marriage,
but she wouldn’t mind dipping her toes back in the dating waters. But this time,
things will be different. What could be more trustworthy and honest than a strong, silent cowboy?

Their first date gets steamier than either of them intended, and Mack fears
it may be too much, too soon for him. Torn between the past and the present, Mack has to cowboy up or lose the possibility of a future with the woman who makes his broken heart beat again.

I can’t tell you how happy I am that I read this novella. Actually, yes I can. Let me do so.

It starts out with both hero and heroine acting responsibly. With some honor and integrity. Her reason for signing up with this dating service might be stretching it – she grew up with dad watching “Maverick” and “Gunsmoke” and she wants to see if there are any decent, honorable “bond is my word” type men left – but hey it’s better than no responsibility at all. He – and this has to apply to at least one of the MC in each of the novellas in this series – got signed up against his will by his sons who wanted him to start moving on with his life.

They talk honestly about their pasts – his widowerhood and her bad dates and why she signed up. She also claims her sexual agency and isn’t ashamed about it. And the pool scene is all “whoa! Hawt stuff” which is before they get back to her room for even hawter stuff.

Both have some self esteem issues. Her husband cheated and ignored her enough to damage her feelings about her desirability and it’s been a long time for him due to his wife’s illness then death plus she was the only one his whole sexual life. They’re on even ground here. They’re both out to reclaim something in their lives – maybe not a forever but definitely a right now. Mack is a little bit shy about it all – not about the pleasure or pleasing her but the etiquette. Does he get undressed waiting for her to come out of the bathroom or is that assuming? He’s thrilled that he feels like a man again, not a dad or a widower but desirable.

But compatibility and initial great sex doesn’t solve all the confidence issues with a snap. Still I love the fact that they feel they can ask for what they want and feel free enough to say why they want particular stuff. It’s all about the communication, right?

The next morning, Mack has to deal with “from then on” and the hope, worry and caution he sees in her eyes. The eyes of a woman used to disappointment. He’s not quite ready yet and won’t promise what he won’t or can’t fulfill and I admire that. His trip down the memory lane of his life with his wife had me crying. No, make that bawling which was so not good because I was reading it at work on a break and had to keep checking to be sure I hadn’t cried my eyeliner off. Then I was laughing as Mack’s youngest son gave him some stern dating advice do’s and don’ts. Like how not to come off like a jerk and that it’s okay and human to not constantly think of his dead wife six years after her loss. After which I cried again.

It’s emotional and moving and hawt which really amazed me given the shorter length. How did you pack that all in there? And I cried. I hardly ever cry while reading but this one just gut wrenched me at times and then made me smile. It’s rare that I feel that a novella is so complete but this one is even with a HFN ending which felt perfect for where the story ended. Okay, I guess I explained my A.