REVIEW: Sleigh Bells in the Snow by Sarah Morgan

It’s no secret around here that I am a big fan of your work, and if there’s any complaint I’ve had with your categories it’s that sometimes they feel too short for the storylines you choose. So when I heard that you were writing a single-title, I was thrilled. I was also nervous, because following authors from one format or subgenre to another is not always a success for the faithful reader. I avoided advance information about the book, wanting to go into it without any expectations besides my previous reading experiences, so all I knew was that it was coming out in the fall and that it was a contemporary. 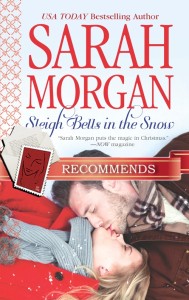 I was so out of the loop that I had to read the title to discover that it was a Christmas story, and when I opened the file and read the first page I was taken aback to see it was set in New York. Wait a minute. Not London? Not Scotland? But then I realized that Kayla, our heroine, is British, and I felt on slightly more familiar ground. I started reading and stopped once, when I had to turn off my electronic device or be removed from the plane. As soon as it was permitted, I started reading again and didn’t stop until I was finished. To give the punchline away at the beginning (for you end-peeking readers), it wasn’t what I was expecting, and I absolutely loved it. Sleigh Bells in the Snow is a holiday story for people who love that time of year, but it is also for people who don’t, and it’s a heroine-centric story, which is something I haven’t seen enough of lately.

The book opens in the offices of the PR firm where Kayla Green works. Everyone else is at the holiday party, but Kayla is hiding away and working furiously in an attempt to ignore the season, as she does every year. A child of divorce who has reduced contact with her family members to the barest minimum (by mutual consent), she derives her self-esteem and her sense of identity from her career, at which she has been very successful. And she enjoys her work a great deal; it’s only at this time of year that her workaholic schedule starts to slow down, because most of the world does manage to take Christmas to New Year’s off, or at least to slow down. When that happens, Kayla’s fallbacks are horror movies and popcorn.

This year, however, a major and unexpected account lands in her lap at just the right time. Jackson O’Neil has given up his lucrative, successful business to come home to Vermont, and he needs a first-rate PR consultant starting yesterday if he’s going to save his family’s 4th-generation holiday resort, Snow Crystal. Kayla leaps at the chance to work her way through the holidays; being on site in the middle of a forest means she’ll be away from the Christmas craziness, or so she thinks. Instead she finds herself enmeshed in the O’Neil family festivities, and remembering that she is Kayla Green, successful adult, not unhappy teenaged Kayla, takes enormous effort. And that effort is complicated by her strong (and mutual) attraction to her client.

Although the plots are quite different, the setting reminded me of the classic film White Christmas. Jackson’s grandfather, the O’Neil patriarch, reminded me of Dean Jagger’s General, and the O’Neil brothers’ banter (as well as their serious efforts to save the resort) recalls Bing Crosby and Danny Kaye. In romance-genre terms, the novel is similar to the short and long series set in small-town worlds; this time last year I was enjoying HelenKay Dimon’s Holloway trilogy, and this has a similar flavor. For readers of Morgan’s categories, Sleigh Bells in the Snow captures the world-building of the Medicals with the characterizations, humor, and heart-tugging backstories we are used to in both her Medicals and her Presents releases.

But enough about how this story is like other stories. It’s also very much its own, original novel. One of my favorite aspects of the book is that it while it is firmly rooted in a small-town, extended family context, it is above all a heroine-centric storyline. We get plenty of Jackson’s POV, and Jackson is a trademark yummy Morgan hero, but it’s Kayla who holds the reader’s interest and who develops the most. Kayla never felt to me like a stock character. Sure, she’s a workaholic who’s avoided having a personal life, but she’s also funny and caring and self-aware. When she loses her cool while giving her initial presentation (she’s in pencil skirt and heels, the O’Neils are sitting at their kitchen table), she’s as concerned about her rudeness to them as she is about her personal failure. Her desire to shut down those parts of life that she can’t control doesn’t keep her from having empathy for those around her, a trait I wish more uptight romance heroines possessed. And when she (inevitably) opens up and becomes more willing to take chances, she saves herself as much as she is saved by the hero or by the family that embodies what she never had.

Like Kayla, Jackson is a character we’ve seen before but who also has enough individuality to be interesting. Yes, he’s successful and handsome and driven. But when he comes back to take over the failing family business, it’s not just because he’s an alpha male and that’s what they do, it’s also because the business he built is related to the family resort, and he brings relevant skills and experience to this challenge. Jackson wants to fix Kayla as much as he wants to fix Snow Crystal, but in both cases he knows that he can’t do it unilaterally and he adjusts his behavior accordingly.

Kayla and Jackson are surrounded by the O’Neil family and other residents of the small town, who all have small and large parts to play. While it’s clear that some of these characters are going to feature in the next two installments, I didn’t feel as if they were only there to set up the next installments of the trilogy. Each of them has an individual backstory, and none of them felt like stereotypes (except maybe the knitting grandmother). There is a scene between Jackson and his grandfather late in the book that gently subverts the usual relationship, and even Jackson’s father, whose death indirectly sets the plot in motion, isn’t quite who I thought he would be.

As I was reading, I was surprised and thrilled to realize that the novel passes the Bechdel test more than once. There is a scene involving the main women characters that sounded just like conversations I’ve had with my women friends and relatives; the back-and-forth between moving, serious movements and leavening humor were pitch-perfect, as I’ve come to expect from this author.

At its heart, this is a Christmas romance, and no one does the double-edged sword of the holidays like Sarah Morgan. She is able to capture the warmth and happiness, but she also remembers those for whom the season is bittersweet. There’s a lovely, poignant scene between Kayla, for whom Christmas is physically painful, and Jackson’s mother Elizabeth, who is navigating her first Christmas as a widow:

Elizabeth smiled. “Why don’t you start hanging those.”

Kayla’s mouth felt dry. “You want me to hang them?”

“Of course. If you’re here with us over the holidays, the least we can do is let you share in our Christmas. I expect you have your own Christmas rituals. All families do.”

Kayla gripped the box. “We had a few.”

Put your stocking by the fire, Kayla. Let’s see what surprise Santa brings you.

There was a hollow, empty feeling in her stomach. She recognized the feeling because she’d lived with it for such a long time.

Loneliness could be felt at any time, of course, but there was something exquisitely painful about the loneliness that came along with Christmas.

She lifted a decoration from the box and stared at it. A moment later it was gently removed from her hand.

It embarrassed and frustrated her that she still felt this way. That she hadn’t been able to put the past behind her and find the same joy in the holiday season that so many others did. “I find it difficult.”

The box was removed from her hand.

“I’d like to do it.” She’d spent Christmas alone for the past decade. This time she was alone in the middle of a family. It couldn’t be worse, surely?

The O’Neils don’t magically transform Christmas into a happy one for Kayla, but by the end we know she is on her way to overcoming some of that painful past. And the HEA works in much the same, relatively realistic way: every loose end isn’t tied up, every obstacle isn’t overcome, but Kayla and Jackson will figure something out.

Readers who are used to my reviews know what a curmudgeon I can be; even when an author is an autobuy, all their books aren’t equally good for me. But when I finished this book, I honestly couldn’t think of any major weaknesses that took away from my reading pleasure. I’m sure other readers will find aspects that don’t work for them. But for me, this story combines all the things I love about contemporaries, small-town romances, and holiday stories, and it puts familiar features together in ways that don’t feel run-of-the-mill. Grade: A