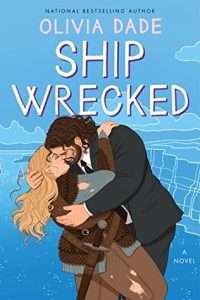 CW: Death of a parent, abandonment

Excuse me while I gush. I loved last year’s All The Feels – Ship Wrecked is even better. The book I read immediately prior took me more than two weeks to read. I read Ship Wrecked in two days. From the first page (which opens, quite literally, with a bang) all the way to the end, I was invested and completely hooked. I adore the humour you write with – I laughed out loud many times throughout the novel – and I love the characters you create. Peter and Maria are now my favourites (please don’t tell Alex; I’d never hear the end of it).

Peter Reedton and Maria Ivarsson are both fat actors who play the characters of Cyprian and Cassia on Gods of the Gates, a GoT-style TV show which links all three books in the Spoiler Alert series.  Ship Wrecked begins the day before their final auditions for the role. Peter and Maria meet in an LA-sauna. Their eyes meet across the steam and more sizzles than just hot rocks. That have a very hot night together. Peter is devastated when Maria leaves without a word before he wakes up.

He does act like a bit of a jerk to her when he sees her again at the audition and when they are first cast opposite one another. Peter felt such a connection to Maria and, at least partially influenced by things in his past (reasons but not excuses) he was particularly hurt when she didn’t so much as leave a note. Later, he does apologise very nicely, taking full responsibility for his actions and without making excuses – and, Maria makes him spell out all the reasons he was wrong in wonderful detail before she lets him off the hook.

Maria is no pushover. She does think maybe she was a bit too mean by leaving Peter the way she did – she felt their connection too – but she also isn’t prepared to take his bullshit.

From season two of the seven year series, their characters play Vikings who are shipwrecked on a deserted, rocky and desolate island and who have been saved by the gods to guard a gate to Tartarus which is on the island. They are, for almost their entire stint on the show, the only actors on the island.

(As an aside, I did wonder a little how Peter and Maria became so close with the rest of the Gods of the Gates cast – they had almost no professional interactions with any of them, their storyline being a separate and distinct thread throughout the series. There are interstitials throughout the story – sometimes text or email exchanges, sometimes excerpts of fan fiction about “Marter”, and sometimes – hilariously – parts of group chats between the cast. The cast do meet up at conventions and award shows but Maria and Peter’s closeness with the other main actors felt like they all worked together everyday. In the end, I put it down to the power of Maria. And maybe a little bit of Alex.)

As to the power of Maria – Maria builds family. She needs the love and support of family around her and if she doesn’t have it, she withers. Knowing she will be on the island with a very small crew and be working closely with Peter for, very likely, the next six years, Maria sets about making a family of them all. Peter is an introvert. He’s a loner who feels awkward around people and isn’t confident with small talk. Maria draws him in and almost before he knows it, he’s part of the group. Once that ice is broken, Peter is well able to solidify and strengthen those relationships on his own but he wouldn’t have been able to make a start with out Maria’s influence. It doesn’t take long for Peter to work out what Maria is doing. He’s amazed and awestruck by her ability to draw people to her.

Peter has been mostly a character actor for over a decade in Hollywood but Gods of the Gates is his big break. There aren’t many opportunities for fat actors to have leading roles. He longs, for reasons, for financial and professional stability. He’s not going to do anything to jeopardise his role on the show and will go along with pretty much any nonsense the awful showrunners throw at him. Maria is not like Peter however. She’s around a decade younger than he and was a moderately successful actress in Sweden. She’s trying her hand in Hollywood but professional success, while satisfying and fun, isn’t what drives her. She will not compromise her sense of self or her need for loving support – if she can’t get what she needs on set, she will walk away. Just like that. This both terrifies and horrifies Peter.

Maria is an adopted daughter of a large family. Her own personal history, which we find out later in the story, means that she cannot thrive if she is not around those she loves or if she cannot build that with those around her. She’s extremely close to her family in Sweden. When it comes to relationships, she’s an all-or-nothing person. Her one-night stand with Peter was meant to scratch an itch. She didn’t count on the connection between them. She didn’t count on what a good man he is. But she mistrusts his ability to take care of her the way she needs to be taken care of – to put her first over all things, even his career. This is a dealbreaker for her and she tries to protect her heart by not going there again with him.

Peter tumbles into love with Maria almost from the first but he values the deep friendship they build together, along with his connection to the tight-knit crew. And he does not want anything to get in the way of his role on Gods of the Gates. Gates is his ticket to success and security – the things he’s worked at for so long. If he messes up this opportunity, it will not come again. So, even when Maria (after a couple of years of filming together for months on end) is prepared to take a risk and get physical with him again, he declines.

“If we got involved that way, and things went sour between us, we’d have nowhere to hide. Nowhere we could lick our wounds until we got over whatever happened. Instead, we’d be forced to confront each other day after day, week after week, no matter how angry or hurt we were. It would be terrible for us, and it would be terrible for everyone on the crew forced to endure the awkwardness and tension alongside us.”

He wasn’t wrong, of course. But wasn’t it worth a gamble?

She opened her mouth to ask that very question, but he wasn’t finished.

“Maria, we may spend years together on this island. Years. We’re the only two actors on the set, and we both know you’re the center of everything here. You’ve made us a team. Hell, you’ve made us a goddamn family, and you’re what holds our family together. But if things went bad between us, the community you’ve built, all the camaraderie you’ve nurtured, could disappear”—he snapped his fingers—“Like that.”

Whatever Maria’s plans about not loving Peter are, we readers know she’s not very successful with them. At various points throughout the show, Maria and Peter are placed in situations which are unsafe for various reasons. For himself, Peter will do whatever he needs to do to keep the job and at the first test, he does not take the stand Maria does. This fortifies Maria in her view that Peter is not the long-term partner for her. However, as the seasons progress and as the pair grow closer anyway, Peter finds different ways to take a stand – not as overt as Maria’s methods but ultimately just as successful. What’s notable is that he doesn’t do it for himself. He does these things for Maria.

Cassia and Cyprian’s story is a slow-burn romance which takes six seasons to reach it’s culmination. There are heated looks, near kisses and much mutual pining but it isn’t until the very end of the show that Peter and Maria have their first sex scene together. It’s pretty epic and will take a week of filming due to television reasons. The scenes in the novel with the intimacy coordinator was hilarious. Maria, who is extremely body-positive and not at all shy about nudity revels in her effect on her co-star.

Slowly, Peter closed his eyes and prayed to the god of thwarted lust for deliverance.

“I figured he’d be spreading my thighs with his hands, but I suppose he could be holding my ass or playing with my breasts instead.” Maria sounded thoughtful. “What are your thoughts, Peter?”

Holy fuck. Before their next discussion with Delia, he was jacking his dick raw.

With a concerted effort, he managed to choke out, “I have no thoughts.”

Once the show finishes however, Peter has plans for Maria. There is no risk of their relationship threatening the series if it went bad and in any event, by this time, Peter is all in and is desperate to come up with a way to convince Maria to stay with him in LA and live together happily ever after. He knows that being separated from her Swedish family would be a great sacrifice – can he be enough for her?

Maria and Peter love one another but their differences and what they need (or think they need) to be happy loom before them.

Quite a bit of the humour in the book comes from which I interpreted as loving pokes at Swedish stereotypes and customs. They  made me laugh, especially Maria with her jar of smelly herring which magically appears from who-knows-where on her person when Peter calls her “Pippi” – which he does a lot. There are plenty of ABBA and Ikea jokes and Swedish idioms which all add a delightful layer to the story. Peter and Maria tease each other all the time. They have the most wonderful banter – trading insults is a love-language for them.

I highlighted numerous sections of the novel but to reproduce them all there may ruin some of the enjoyment for readers and besides this review is already too long. I loved this book. It’s fantastic. I adored Peter and Maria and the secondary characters. TL;dr – [heart eyes emoji].

“We should seal our not-missing-each-other pact with a kiss.” He raised his head and scratched his beard in contemplation. “That’s the Swedish custom, correct?”

“Our daily lives revolve around the metric system, Speedos, and affirming how little we’ll miss one another by kissing.” Loftily, she clarified, “French kissing, obviously.”

He almost managed to stifle his snort. “Because you’re European.”

“Well, then.” His eyes flared with heat once more. “Consider me the newest member of the EU.