It’s not often that I’m tempted to write a love letter to the author of a book. Oh, I’ve had my fair share of books that make me deliriously happy when I read them, leading to reverent petting of the book cover and a special place on the “will read again” shelf. There’ve even been a few books that have convinced me to go sample the author’s backlist, mining for a gem similar to the one I just read. But never, ever, have I read the latest book in a new-to-me series and had the urge to beg, borrow and steal to get all of the previous books. 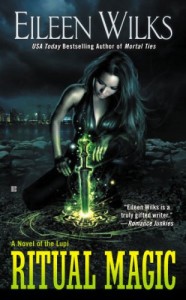 FBI agent Lily Yu has been through hell and back (literally) with her mate, Rule Turner, and their small army of friends and family members. Now they face their greatest test of all – the wedding. While wedding planning is stressful for just about any bride, it’s a nightmare for Lily, made worse by her critical and overbearing mother, Julia. Unfortunately, shortly before the big day, Lily’s mother is attacked by an unknown foe and suffers a memory loss that regresses her, mentally, back to age twelve. Even worse, similar symptoms show up in dozens of others, with no discernible connection to Julia. It’s up to Rule, Lily, Cullen and their unlikely band of lupi and magical compatriots to separate fact from fiction, friend from foe and get to the bottom of the mystery while keeping their souls intact.

While an incredible read, the book didn’t quite stand by itself – there were quite a few concepts and people that popped up leaving me scratching my head and flipping back pages, trying to figure out where they fit in to the master plan. A glossary and cast of characters would have been incredibly helpful in the first quarter of the book. Though, while the questions were mildly annoying, they weren’t enough to take me out of the story, and certainly not enough to have me putting the book aside. As the plot unfolded, you did an amazing job of seamlessly integrating events from the previous books so that things started making more sense. I think, though, that going back through the other books in the series could only enhance this one – and wouldn’t detract in any way from the experience.

I’m used to romantic protagonists being plagued by all manner of drama and misunderstandings, but this story didn’t revolve around anything like that. In fact, the characters showed amazing compassion and understanding toward each other – a gentle sweetness that was a beautiful counterpoint to the chaos surrounding them. There were no questions about their love for each other – not from a reader perspective, and not from a character perspective, even when everything in the world was in question. They managed to reach that absolute balance between “I” and “We.” It’s very rare to find a couple that works so perfectly as a team, complimenting each other even when there are disagreements as to methods.

Something held tight inside him unclenched. The sudden loss of tension left a dull smear of pain in its wake. His closed eyes stung. He’d needed this. Needed her, and now she was here. They leaned into each other. He inhaled deliberately, breathing her in.

Lily was neither lupus nor Rho, but she was responsible for her own control. No one could or should attempt to usurp that, no matter how much he loved her and how certain he was that she needed to let go. To let herself fall into tears or rage or whatever lay on the other side of the walls she’d put up.

The insertion of dark humor is not only welcome, but utterly appropriate to the setting. When dealing with difficult situations, including those surrounding events the rational mind and “normal” human beings can’t fully comprehend, sometimes dark, sometimes inappropriate humor lightens the mood and provides just enough distance to keep the issues from becoming utterly overwhelming – they highlight the ridiculous as a coping mechanism. And sometimes, even paranormal humans succumb to the occasional banalities.

The floor was finished, at least—and hadn’t that been a hassle, deciding what to use! Lily had leaned toward bamboo. Rule had been torn between the beauty of a dark-stained hardwood and the practicality of carpet, which offered better traction to a wolf’s paws. In the end, they’d gone with stained and polished concrete. It looked great, was highly customizable, and wouldn’t get scratched up by anyone’s claws.

In summation, this beautiful book was filled with an ephemeral blend of spicy romance, adrenaline-pounding action sequences, and a true, deep examination of human, and parahuman, emotion done in such a way as to be balanced rather than overwhelming. Thank you for the perfect escape and a novel I’m thrilled to hug to my chest happily. My arms are going to get crowded from trying to cuddle the whole series. B+

In an effort to provide more coverage of paranormal romance and historical romance, I’ve been searching for additional reviewers.  Mary Kate is one of a couple we are going to try out here at Dear Author.  From Mary Kate: