REVIEW: Of Cats and Men by Sam Kalda 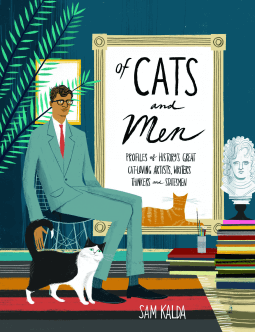 A stylish, illustrated gift book from an award-winning artist that profiles notable cat-loving men throughout history in words and pictures.

Of Cats and Men presents a fresh approach to cat entertainment that’s smart, sweet, and driven by beautiful art (instead of tacky photography, as many cat books are). Appealing to both men and women, the “cat men” approach is a fun twist on the “cat lady” stereotype and makes for a highly giftable book. The 30 men profiled range from writers and artists such as Haruki Murakami, T.S. Eliot, William S. Burroughs, and Ai Weiwei, to historical luminaries such as Sir Winston Churchill, Nikola Tesla, and Sir Issac Newton. In addition to the portraits, the book features beautifully hand-lettered quotes about cats by some of the men, including Twain’s “When a man loves cats, I am his friend and comrade, without further introduction.”

Though I have had, and loved, dogs in my life, I am by nature a cat person. Except for my college dorm room years when having one was impossible, there have been cats around me for as long as I remember and since I’m getting up there in age, that’s a long time. With my current number, I’m flirting with “Cat Lady” status – though I categorically refuse the adjective “crazy.” I saw the title of this book and thought, “Right, it’s about time we heard about men and cats.” And so I requested it to read and was thrilled to learn more about fellow cat lovers as well as charmed by your delightful illustrations.

So we all know about ancient Egypt when cats were worshipped and when harming one could bring a whole heaping of wrath down on the harmer’s head. But what about between then and now? I had always thought times were hard for cats in the interim what with the witch familiar nonsense plus some ghastly behavior by medieval Italians which I won’t go into. Imagine my surprise to learn of Hywel the Good who ruled Wales in 920 who realized the practical value of felines and enacted laws to protect them. And in medieval Egypt, a Mamluk sultan named Baibars bequeathed a garden to the cats of Cairo where they were fed daily.

I’ve been meaning to read some of the essays of the great French writer Michel de Montaigne; now that I know he wrote one wondering about the how the world looked from his pet cat’s POV, “When I play with my cat, how do I know she is not playing with me?” I’m moving this one, at least, up my TBR stack. Sir Isaac Newton is rightly considered a scientific Great but did he also invent the cat door flap? Samuel Johnson, author of until then the most authoritative dictionary of the English language, would personally go out to buy oyster for his beloved Hodge – whose statue greats visitors to the Johnson museum today.

Other men of letters are/were cat lovers. Mark Twain wrote many pithy quotes about cats while Edward Lear’s beloved cat Foss helped salve his periods of depression – an early example of what science has proved, that petting a cat reduces stress. Ray Bradbury and Raymond Chandler dealt with what all cat owners face – our darlings flopping on top of what we’re trying to read or write and acting as paperweights.

“I said something which gave you to think I hated cats. But gad, sir, I am one of the most fanatical cat lovers in the business. If you hate them, I may learn to hate you. If your allergies hate them, I will tolerate the situation to the best of my ability.”
-Raymond Chandler

Nicola Tesla credits the static electricity he saw while petting his pet cat Macak as “sparking” – forgive the pun – his interest in the field. Anyone who’s ever lived with Siamese knows how vocal they are – as did Maurice Ravel who had two of them. Louis Wein’s images of anthropomorphized cats coincided with the Victorian interest in felines that lead to the first cat show in 1871. Personally I prefer his almost electrified paintings. TS Eliot left us “Old Possum’s Book of Practical Cats” while from early 20th century artists Paul Klee and Tsuguharu Foujita we get variations on cat paintings and etchings.

Cats are so graceful and athletic – leaping, soaring and grand jeté-ing around our fine breakable objects, causing us heart failure. Did George Balanchine use his beloved cat Mourka – who had his own autobiography published – as an inspiration? In Jean Cocteau’s film “Beauty and the Beast,” the hero is depicted more as an overgrown Persian cat. This quote is a nice way of looking at cat fur all over everything.

“I love cats because I enjoy my home; and little by little, they become its visible soul.”
– Jean Cocteau

Visit the homes of Ernest Hemingway (which I’ve done) and Sir Winston Churchill (which I would love to do) and see the descendant(s) of their pet cats. Romare Bearden was often photographed with one of his beloved cats and he and his wife used to take them traveling. Controversial author William S. Burroughs was once asked by Allen Ginsberg if he ever wanted to be loved. “It depends. By who or what,” he said. “By my cats, certainly.”

Edward Gorey is well known for his macabre illustrations of cats but his estate was left to a trust to care not only for cats but also dogs, bats and insects. I try to give my precious darlings a good life but sadly I must admit they don’t have it nearly as nice as Karl Lagerfeld’s “Choupette” who has two personal maids and social media accounts. While out on tour, Freddie Mercury used to call home and speak to his cats as his best friend held the receiver to their ears.

Charles Bukowski advised, “If you’re feeling bad, you just look at the cats, you’ll feel better, because they know that everything is, just as it is. There’s nothing to get excited about. They just know. They’re saviours. The more cats you have, the longer you live. If you have a hundred cats, you’ll live ten times longer than if you have ten. Someday this will be discovered, and people will have a thousand cats and live forever. It’s truly ridiculous.”

I guess my four cats will help me live a few years longer? Maybe I need more. A

→ Jayne
Previous article: Thursday News: PRH UK to pay “students,” stepmothers, what romance is, and where to find it
Next Post: Reading List by Jennie for January through March