You have been one of my autobuy authors from the moment I discovered you in the early 2000s, and no one writes bad boy heroes like you do. In today’s era of alpha billionaires, Motorcycle Club anti-heroes, and New Adult dudebros who wreck everything around them, I wondered how your dangerous men from an earlier era would hold up. When I saw that one of my favorite Romantic Suspense novels ever, Nightfall, was available in ebook form, I had to revisit it. Does the book hold up after 20 years? And is Richard Tiernan still the epitome of sexy/dangerous? The answer to both questions is: oh yes, and how. 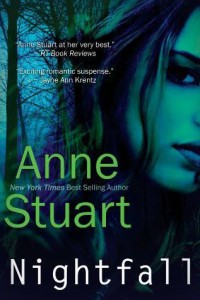 When the story begins, Richard Tiernan has been convicted of the grisly murder of his wife and has been released pending appeal after famous author Sean O’Rourke posts his million-dollar bail. Tiernan holes up with O’Rourke in the latter’s Park Avenue apartment, where O’Rourke plans to write a novel about Tiernan and the killing. Meanwhile, Tiernan’s young children have disappeared and he is suspected in their deaths.

Cassidy Roarke, Sean’s editor daughter, comes up to New York from her home in Baltimore after receiving a cryptic message from him and discovers that Sean wants her to help with the manuscript. She recoils at the idea of participating but can’t say no to her brilliant father, especially since she suspects there is more going on with him than just the desire to complete the novel he says will be the crowning achievement of his career.

Cassidy is both drawn to and repelled by Tiernan; she has no reason to doubt the judgement against him and he doesn’t do anything to persuade her otherwise. Tiernan is clearly attracted to her and Sean seems to be egging him on. The result is a type of cat-and-mouse game in which Cassidy is not exactly the mouse (because she’s quite clear-headed and relatively good at taking care of herself), but she does feel a bit like an insect on a pin. Tiernan is constantly studying her and engaging with her (mostly with Sean’s complete and somewhat baffling approval), and Cassidy soon finds herself enmeshed in Tiernan and Sean’s machinations.

Sean was in the midst of some high-flown fantasy, staring out the window at the New York skyline. Tiernan was sitting in the huge green leather chair that had been in Sean’s office since the beginning of time.

Cass remembered when she was small, curling up in the warm leather arms of that chair, sleeping. It had been her favorite place in the world. Tiernan didn’t turn, but she knew perfectly well he knew she was there. He seemed to have a sixth sense.

She wanted to order him out of her chair. Instead she simply stood in the doorway and cleared her throat.

Sean whirled around, an accusing expression on his florid face. “About time you woke from your beauty slumber, Cassie,” he said. “You never used to be such a slothful creature. We have work to do, and time’s a wasting.”

“Is it?” She carefully avoided Tiernan’s gaze. He was dressed in jeans and a cotton sweater against the cool morning air. She was wearing the same thing. He had a mug of black coffee in his hand. She drank hers black as well.

“You’re the one who’s so determined to get back to Baltimore, though why any sane person would choose to live in Baltimore when they have the option of New York is beyond me,” Sean declaimed. “We’re planning on changing your mind, aren’t we, Richard? Make it impossible for you to leave.”

She couldn’t help it, she threw him a wary glance as she moved to her father’s littered desk. He met the gaze blandly enough, but she wasn’t so gullible she didn’t recognize the challenge. The threat.

“I have a job,” she said mildly, glancing at one stack of papers that looked like official court transcripts.

“You could take a leave of absence.”

I can’t give away much more of the plot without spoiling the reading experience. Stuart does a terrific job of creating a jigsaw puzzle in which the pieces slowly come together until you suddenly see the picture you’ve been working on. Every character in the story has a purpose, and even the minor characters are well drawn. I particularly appreciated Cassidy’s relationship with Sean’s current wife, Mabry. Unlike so many fictional stepmothers, Mabry, who is a gorgeous, thin, platinum-haired ex-model, has an excellent relationship with Cassidy. The two women don’t compete; they talk to each other, and they are connected by their common love for Sean and their ability to see him clearly. Cassidy’s mother, who appears late in the story, is far more of a caricature than Mabry, but even she is a recognizable type.

Richard Tiernan is the anti-hero whom every author writing such a character hopes to produce. He is genuinely frightening and genuinely sexy. As Cassidy gets to know him better he reveals more sides to himself and more honorable attributes, but he never loses that aura of danger. Richard was a college professor before the murder, and Stuart does a terrific job of making me believe that a person in an unexciting, unheroic occupation can have psychological depths we never imagine (and they may never explore). This is definitely a romance, and there is definitely an HEA, but Richard never, ever loses his edge.

In Stuart’s novels, bad boys aren’t always paired up with heroines who stand up to them, or who feel like true partners. Some of them verge on TSTL, while others seem to walk right across that line and take up residence. Cassidy, thankfully, doesn’t go there. She’s spent her entire life dealing with narcissistic, emotionally unavailable people, and she’s good at carving out a space for herself and a life that doesn’t kowtow to them practically or emotionally.

As a result, when Cassidy and Richard finally get together, the sparks really fly. I’d forgotten how sexy a sex scene can be. This is not a case of Tab A into Slot B. The language can get a little lush, but it suits the characters’ temperaments and relationship. And every scene has meaning for the story.

The suspense plot is top-notch. There are clues scattered throughout the story, and since this last reread was my third or fourth time through the novel, I could see the trail. But when I read it for the first time I was so engrossed in trying to figure out Richard Tiernan that I almost didn’t pay attention. I don’t mean to suggest that the mystery is grafted on, not at all, this is a suspense thriller down to its bones. It’s just that the Sean-Richard-Cassidy relationship is so intriguing that I almost didn’t care about whether Richard did it and if he didn’t, who did.

There are books that grab you and don’t let go when you read them, but they don’t wind up being unable to stand the test of time. This is not one of those books. As an inveterate rereader, I have no doubt that I’ll read Nightfall again one day, and when I do, I’ll enjoy it yet again and probably find something I missed before. Grade: A