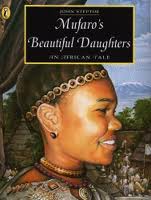 When I went to buy a copy of “Princess Furball” at Amazon, several other books were recommended to me as being of possible interest. “Mufaro’s Beautiful Daughters” was one of them. It has some elements of the classic Grimm’s version of “Cinderella.” Yet those who dislike that story because the idiot Prince can’t seem to recognize the love of his life without the aid of a shoe might enjoy this tale better. In a small village across the river and a half day’s journey from a great city lived Mufaro (Shona: happy man) and his two daughters Manyara (ashamed) and Nyasha (mercy). Everyone agreed that the two daughters were beautiful but that while Manyara was often spiteful and mean, Nyasha was always thoughful and generous. Nyasha worked hard in her garden and there she met a green, garden snake she befriended and called Nyoka who would always stay near the young woman.

One day, the King, who lived in the great city, announced that he was looking for a wife. Manyara immediately put on airs and stated that she would be chosen as Queen while Nyasha would be one of her servants. Nyasha ignored her sister’s taunting and declared that perhaps it would be better for her to remain with their father. But the messenger said that all the young women must appear before the King to allow him to pick the most Worthy and Beautiful. So Mufaro announced that both his daughters would leave for the city the next morning after the village held a wedding party. Only Manyara stole away from the village in the night and headed for the city. Along the way, she met a hungry young boy and an old woman who offered her advice which Manyara promptly ignored. At daybreak, the villagers discovered Manyara was gone but after fruitlessly searching for her, Mufaro decided he and Nyasha would leave as planned. Along the way, they also encountered the same people Manyara had but while that daughter had been rude to them, Nyasha offered them her own food and saw to their comfort.

Upon arriving in the city, Nyasha was overcome with its beauty but dismayed when her sister rushed out of a central building sobbing and declaring that a monster lived there. Bravely, Nyasha entered the chamber and found her friend Nyoka. But why was he there, she asked. It was then that Nyoka revealed himself to be the King, as well as the young boy and old woman whom Nyasha had helped and Manyara had scorned. So it was Nyasha who was chosen as most Worthy while her sister became a servant in her sister’s household. This book is based on an African folk tale collected and published in 1895. John Steptoe’s illustrations are sublime in their beautiful simplicity. They convey action, contemplation, confrontation, happiness and even kindness. Once I’d finished reading the story, I immediately went back and began to pour over these gorgeous pictures. Like all fairy/folk stories, there’s a message to be learned and here it’s about a person’s inner character and worthiness as opposed to just outer looks. John Steptoe died far too young and I can only imagine what he might have achieved. But check this book out to discover part of the illustrated legacy he left behind. A