REVIEW: Mr. Bishop and the Actress by Janet Mullany

When Jane mentioned that you had a new book available for review, I jumped at the chance to read it. I’ve become quite the fan of your books put out by Little Black Dress, and cannot for the life of me understand why these aren’t available for sale in the U.S.* It’s not as if the series is edgy  or risky  or “out there” in any way. It’s a strange world we live in where romances featuring vampires, angels and werewolves (or possibly even a vampire/angel/werewolf hybrid) are de rigeur, but a simple historical romance between two commoners has to be hunted down or purchased from international sources. 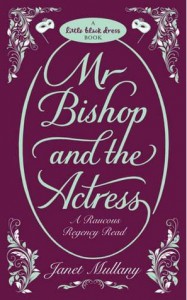 Sophie Wallace and Harry Bishop meet when he is drafted by his employer, Lord Shadderly (whose romance is depicted in Improper Relations ) to help get his nephew Charlie Fordham out of desperate financial straits. Harry travels from his employer’s estate to London and encounters Sophie, who is Charlie’s mistress. They meet as creditors remove virtually everything from the house Charlie has been keeping Sophie in, and spar over a bed (enormous, with a vaguely salacious painting on the underside of the canopy) that Sophie insists is hers and thus should not be removed along with the rest of the assets, but which she has neither the resources to move nor anywhere to move it to.

I liked both Harry and Sophie right away. We are actually introduced to them each separately in the prologue and first chapter of the book (like other books in the series, this story is told in the first person, alternating between Harry’s and Sophie’s viewpoints). In Sophie’s prologue, we meet her a number of years earlier, as a teenager eloping from her boarding school with a sailor (and with the assistance of two school chums). Harry we meet shortly before the meeting between he and Sophie – he is newly hired by Lord Shadderly and quickly finds himself alone with the fecund Lady  Shadderly as she goes into labor. His assistance in delivering  Lord and Lady Shadderly’s  third child goes a long way towards quickly binding Harry up in the lives of the family.

When Harry and Sophie meet, he finds himself surprised by her; she is a “rather slender, pretty young thing”, not the “elderly lightskirt” he’d been led to expect. She manages to put him in his place when he suggests that she find another profession:

“Oh, an excellent idea, sir.” She beams at me. “You know, I have always fancied the law. Or perhaps I should try for a commission in one of His Highnesses’ more fashionable regiments? I should look well in an officer’s uniform, I think.”

Harry rather reluctantly takes Sophie and her big bed to the modest hotel his parents run in London.  Somewhat   impulsively, she seduces him that night. Afterwards, they go their separate ways, but find themselves back in each other’s company when Sophie takes a position as companion and music teacher to Lord Shadderly’s ward, Amelia (a position arranged with the assistance of the school chums from the prologue).

From there, the story is deceptively simple, for the most part (there’s some running around in the last third, but it’s not pointless running around; it serves to advance the story). Harry and Sophie are frequently thrown together and share an attraction, but are kept apart by his ambivalence about revealing what he knows about her past to  their mutual employer  and her belief that he disapproves of her more than he actually does (in fact, Harry has had some second thoughts about his cavalier suggestion that Sophie find another profession). There is the minor fact that Sophie blackmails Harry into letting her stay, but really, that doesn’t end up being a factor in their relations much at all.

There is a lot to like about Mr. Bishop and the Actress – one detail that I appreciated  was the hero’s mixed race heritage, which is only referenced twice. The first time is in passing, and I wondered if I was misunderstanding; when the heroine meets the hero’s mother, reference is made to her being “dark-skinned.” The second time it’s spelled out more clearly:

“Your grandfather sounds like a remarkable man,” Lord Shad comments. “He was a man of learning, himself?”

“He was of high birth. My mother’s mother was his property.” In my bid for atonement I have revealed the shameful secrets of my family and my origins.

A silence falls, broken by Lady Shad’s strange mixture of kindness and clumsiness. “Bishop, will you take this child? I wish to drink tea.” She hands over Harriet

and examines me frankly. “You don’t look black.”

Harriet blows a bubble at me as I receive her sweet weight in my arms. “I resemble my father, ma’am.”

“Well, then. You know, Bishop, it’s high time you got some of those yourself. Babies, I mean. They probably wouldn’t all be black.”

“Ma’am,” Lord Shad interjects, “leave the man alone, and for God’s sake stop speculating on his unbegotten offspring. Have you no sense of propriety?”

I almost would’ve liked more information about this, and how it informed the hero’s personality, but I wonder if perhaps it actually wasn’t that big a deal in the time and particularly the place that the story occurs in (as it might’ve been if the story was set in the U.S.). In any case, it gave some depth and shading to Harry’s character, particularly in his striving to better himself and his circumstances in life.

I really, really like first person narration, more than the average romance reader, or so I’ve always been led to believe. But I also have been led to believe that one of the chief objections of romance readers against first person narration is the lack of one of the main characters’ point of view (specifically, usually the hero’s). So alternating first person POVs is a neat solution to this problem, and allows the reader to get into the mind of both of the main characters. It helps that the hero and heroine of Mr. Bishop and the Actress are both so full of humor and wit. I particularly liked Sophie’s cleverness and flippancy:

“I don’t think it would be proper. Flirting is hardly the female equivalent of carpentry.” The claim of impropriety is the best way to end an argument with Amelia,

And, of course, I enjoyed Sophie and Harry’s sparring:

“You have a cold. Colds sometimes make people snore.”

“I do not snore. No one has ever complained of it before.” I drag the bedclothes over myself and turn my back on him. As I do so I become aware of an impediment of a somewhat personal nature protruding into my side of the bed. “Oh, and Harry?”

“This bed is narrow enough. We cannot afford that sort of thing to take up valuable space.”

“It is unnatural. I am an invalid.” And having had the last word, I wipe my nose on the sheet and compose myself to sleep.

I’ll admit to finding incredibly amusing, especially, Harry and Sophie’s separate reactions to their first encounter. Let’s just say that Harry is more effusive than the somewhat jaded Sophie. I do love a story where the heroine is more experienced than the hero; here I especially liked that it’s not belabored (nor does it seem to be much of an issue for Harry, thankfully). It’s really more of an implied assumption based on their histories.

So, in summary, I liked just about everything about Mr. Bishop and the Actress. There are quibbles I could make – some silly business with a amorous theater owner who pursues Sophie comes to mind – but really, I can’t say that these had much of an impact on my enjoyment of the book. Right after reading it, I thought it was an A- (perhaps because my natural inclination is to think a straight A read requires more angst). But it’s been a few weeks and the book has stayed with me, and just thinking about Harry and Sophie makes me smile. So, an A it is.

This book is now freely available in the US.