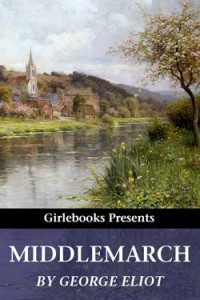 My recent success with 19th century English novels has emboldened me to continue to  tackle classics. I have also gotten into the habit of downloading public domain books onto my iPhone (the app I use is Stanza). I still love my Sony PRS-505 Reader, but the thing that’s great about reading on the iPhone is that I can whip it out  wherever and  whenever (heck, I usually have my iPhone  in my hand  anyway) and read a page or two while waiting for the elevator, standing in line at the grocery store, etc. I also find that the small iPhone screen actually works better for me when reading big, meaty novels with dense text – the writing is broken up into very small, manageable chunks and I get a sense of satisfaction from turning the page frequently (okay, I may be weird about that). It’s true that it took me a long time to read Middlemarch, and that it was likely a lot of pages. I’m not sure how many because the book was only  displaying page counts by chapter, but it was 87 chapters; at an average of 50 pages per chapter, that’s 4,350 pages. But they were short pages! Anyway, thus ends my PSA for the awesomeness of reading public domain classics on the iPhone; on to Middlemarch.

My previous experience with George Eliot consists of reading Silas Marner in high school. I remember a lot of  my classmates  hating it; by my own recollection (high school was a long time ago), it was a slog but not without its rewards. (Which was true of a lot of generally-hated high school books, I have found. Except for The Old Man and the Sea. Never The Old Man and the Sea. Ugh.) But my impression of Eliot was that she belonged to that class of 19th century novelists that are more maligned than revered these days, at least by all but literature majors and English professors (others  that belong in this group include Henry James and Thomas Hardy).

Indeed, Googling “I Hate Middlemarch” yields two Facebook groups immediately, one of which suggests that Eliot should have been drowned at birth (harsh!) and calls the book “a heinous crime against humanity.” So what did I think?

I actually kind of loved Middlemarch.

Middlemarch is subtitled “A Study of Provincial Life”, and indeed it captures the goings on of a fairly large cast of characters over the period of a couple of years in an unremarkable English town in the 1830s. I’ve really come to appreciate first-hand accounts of this time period (both fiction  and non-fiction), because it was such an interesting age in England. The impact of the Industrial Revolution was still spreading throughout the land, and other reforms were being vigorously pursued by various factions. Middlemarch touches on many of these issues: political reform, doctrinal religious differences, advancement in medical knowledge, the obligation of landowners to their tenants, education and the role of women in society.

One thing that really struck me reading Middlemarch was its humanity. I don’t know why, but I’m always faintly surprised by nuanced characterizations in older novels – I tend to think of them as having a more black-and-white view of humanity, with characters being either unrelentingly good or pure evil (I think Dickens at his worst is guilty of this type of characterization, though to be fair he also wrote many more complex characters). The main characters in Middlemarch are all flawed to a degree; some are more sympathetic than others, and one I spent much of the book wanting to smack, but they are human, not cardboard characters put in place to teach Important Moral Lessons. Even one of the least likable of the characters roused my sympathy by the end, because he pays so dearly for his misdeeds.

The story begins with the introduction of two sisters, Dorothea and Celia Brooke. The orphaned sisters are in the care of their uncle, Mr. Brooke, one of the novel’s few rather comical figures. Mr. Brooke is  a silly man who tends to prattle on whether he knows what he’s talking about or not (usually he does not). Dorothea is serious and devout, and a fervent believer in social  reform, particularly concerned about the plight of poor tenant farmers in the area. She’s one of the main characters in Middlemarch, and one of those 19th century characters whom the reader keenly feels is disavantaged by not being born male; she is forced to sublimate her wishes over and over again because of her sex, and can really only do the good she wants to do in conjunction with a husband or some other male benefactor. Celia is much more conventional, interested in pretty things and looking forward to the role of wife and mother. In spite of their differences, the sisters are very close. Dorothea is pursued by Sir James Chettam, a handsome and wealthy baronet, but she rejects him in favor of the clergyman Edward Causabon, and so James marries Celia (to whom he is honestly much better suited).

The marriage of Causabon and Dorothea illustrates one of the novel’s main themes, that of marriages that turn out unhappy because of mistaken or unrealistic expectations on the part of one or both partners. In this case, Dorothea is expecting to be the right hand of a brilliant man (Causabon is working on a scholarly tome  called The Key to All Mythologies), and thus share in his intellectual pursuits in the only way open to her in 19th century England. She does not realize that Causabon expects a much more conventional, biddable wife, and that in any case his brilliance is overstated – he is in fact beset by insecurity and self-doubt as he pursues his never-ending project.

Another marriage that founders under the weight of faulty assumptions is that of the doctor Tertius Lydgate, recently arrived in Middlemarch, and Rosamond Vincy, the mayor’s spoiled daughter. Their marriage itself is something of an accident, coming about when Lydgate realizes that the attentions he’s paid to the beautiful and vivacious Rosamond are viewed as being much more serious than he intended them to be. Lydgate is a flawed though somewhat sympathetic character: his devotion to his patients and to the advancement of medical knowledge ends up alienating him from some important people in Middlemarch, which has an effect on his career and his ability to support Rosamond. Like Causabon, he expects his wife to be a docile, submissive creature, but he gets more than he bargained for when Rosamond’s demand for a high standard of living forces them into ruinous debt. However much Lydgate marries without intention or love, he tries very hard to make Rosamond happy, and her childish and self-centered attitude makes her one of the least likable characters in the entire novel. If not for one brief act of self-sacrifice  late in the book, Rosamond would’ve been pretty intolerable. I appreciated that Eliot gave even this (believably) shallow character some nuance in the end.

The hasty marriages Eliot depicts are contrasted by the long courtship between Rosamond’s brother Fred Vincy and Mary Garth, the daughter of   the wise and compassionate land manager Caleb Garth. Mary is  a life-long friend of Fred’s, and she works  for Fred’s extremely cantakerous uncle, Mr. Featherstone in the early chapters of Middlemarch. Fred is often in her company as he is known to be the uncle’s heir, though it’s a changeable thing (and eventually is changed for the worse, or perhaps the better, depending on how you look at it). Fred is in love with Mary, and Mary appears to be at least quite fond of Fred, but he has a lot of growing up to do before they can be together. For one, he must settle on a career. His family pressures him to join the clergy, but Mary, knowing how ill-suited Fred is to that profession, refuses to marry him if he does.

Middlemarch is frank about the role of religion and of the  clergy in the lives of its characters. Fred is not the only character urged into this profession for practical reasons.   The Reverend Farebrother, briefly a rival for Mary’s affections, is open with his friend Lydgate over his shortcomings as a minister. He’s actually better at it than he thinks, concerned for his parishoners and full of good sense, but he must gamble to supplement his income and support his mother and aunts, and he’d really rather pursue scientific studies than religious ones.

One of the pleasures of the novel is the way that the characters’ lives become intertwined over the course of the story. Middlemarch is not a tiny village; many of the characters know or know of each other, but sometimes only in passing.   The paths of many of the pivotal characters do cross, however, sooner or later. One of the characters who ties the others together is Mr. Bulstrode, a pious and rather judgmental financier who is brother to Mrs. Vincy and thus uncle to Rosamond and Fred. Bulstrode has a dark secret (more on that in a moment) that gives him a secret connection to Will Ladislaw, who is Causabon’s cousin and who cherishes a secret love for Dorothea after meeting her on her honeymoon in Italy.

I’m sure it starts to sound a bit soap-operish in summary, but I think Eliot has a point to make about the way that the lives of these people intertwine; one drops a stone in a pond and the ripples spread to touch those that the person may barely know.

Regarding Bulstrode and his secret: it’s been my observation (albeit from limited study) that 19th century English novelists were fond of this device.  A character may be living a blameless and Christian life, but the sins of the past eventually catch up with him or her. See:  Eliot’s own Silas Marner, Hardy’s The Mayor of Casterbridge and Tess of D’Urbervilles, a lot of Dickens.

The language in Middlemarch can get a bit…byzantine, in that 19th-century way, by which I mean I occasionally did get lost in sentences that were a paragraph long with little punctuation and a lot of words that didn’t make much sense unless you read them three times, slowly. I’ve come to expect this from classics of the 1700-1800s, and actually I do find that repeated exposure does make comprehension easier. And while this is not a comic novel, Eliot manages to get in some wicked jabs occasionally. My favorite was this:

“To point our other people’s errors was a duty that Mr. Bulstrode rarely shrank from…”

How can you not love a writer who skewers her characters as neatly as that? My grade for Middlemarch is an A.