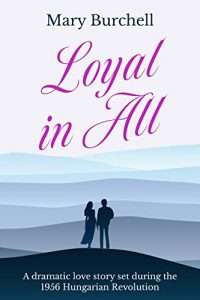 As Budapest crumbles, Marika’s heart is being torn in two…

Bruised from her unrequited love for journalist Rodney Dering, dedicated nurse Marika Stevens is tasked with caring for a Hungarian child in Budapest. She quickly falls in love with the beautiful city … but when enigmatic doctor Janos von Raszay warns her to flee Hungary immediately, suddenly Marika has more than a broken heart to contend with.

With the country gripped by revolution, Marika is desperate to ensure her Hungarian mother and grandmother are safe. When she insists on a dangerous rescue mission, both Rodney and Janos are drawn into the plan.

As Budapest falls to its knees, a tense game of cat and mouse ensues … and slowly Marika realises her heart is becoming torn between the two men. But Janos is wanted by the government for spying, and soon the country’s secret police are hot on their heels…

Can Marika trust her feelings when everything around her is changing? Will she turn back to safety before it’s too late?

Or will she risk everything for loyalty and love?

Set amidst the turmoil of the Hungarian uprising, LOYAL IN ALL is a tense and compelling saga of romance and adventure between a doctor and nurse in 20th century Europe.

This is one of the newly released Mary Burchell books and it takes place in Hungary during the short lived Hungarian Uprising of 1956. Despite the nature of most of the plot, there’s a surprising amount of Burchell’s dry humor throughout and two of my favorite characters ended up being the heroine’s Hungarian mother and grandmother. They’re elegant, they’re sophisticated, but they are tough women. Marika Stevens has inherited the grit of both women which will stand her in good stead as the world crumbles around her and only courage will get her through.

As the story starts, British Nurse Marika Stevens is finishing up her assignment in Budapest. Burchell gives Marika a plausible reason to be there in the autumn of 1956, working with handsome Hungarian surgeon Janos von Raszay. While they are sitting in one of the city’s cafes, he tries to warn Marika to leave Budapest sooner rather than later but since he’s unwilling – or unable – to give her a concrete reason why, Marika, “with the casual confidence seen only in those races who have never known conquest” shrugs off what he says.

“Oh you British! Even now you think the world must be safe for you. Why do I bother to argue with you?”

It will not be the last time Janos vocally throws his hands up at something Marika, or the other British in the book, do. Not too long later, Marika gets a first hand glimpse, in an alternately hilarious and chilling scene,

I’ll complain to the real police — polizei — or whatever the word is in your stupid language! I’ll complain to the British Consul too. What do you mean by troubling foreign visitors? We’re British — do you understand? — British — and we expect to be treated properly —”
She poured out a stream of English upon him, throwing in an occasional Hungarian or German word, as though she thought this might give the stupid foreigner some pointers. In all her life she had never supposed she could find such a rapid, shrewish stream of words.
He seemed rather stunned at first.

of what he’s been trying to get her to believe and from that point on, she’s not only a believer but determined to help get this man out of a country with Secret Police trying to arrest and probably torture him. If only Marika hadn’t arranged for her mother, married to but also estranged from an English diplomat, to journey to Budapest in order to visit her own mother whom she hasn’t seen in decades.

Juliczka Stevens might be flawlessly beautiful and composed but she’s also game for helping her daughter hide the doctor and then get him smuggled out of Budapest by an English journalist Marika knows who has arrived to report on the growing unrest. Ducking and dodging the Secret Police, they rendezvous in the country at the estate once owned by Marika’s grandparents where her Nagyanya now lives in reduced circumstances but still with a will of iron. Seriously, people dismiss that woman at their peril.

“Nonsense. We aren’t the kind who die of shock.” Mrs. Stevens smiled contemptuously. “We’re tough, you and I and Nagyanya. Haven’t you found that out yet? You should have done. That was why you didn’t hesitate about helping von Raszay. You were just being true to type.”
“W-was I?”
“Of course. We may be beautiful and rather gentle-looking,” her mother went on, without false modesty and without affectation, “but there’s a curious line of steel underneath. That’s why we are a little bit dangerous.” And she smiled thoughtfully. With the country dissolving as revolutionaries and counter revolutionaries claim the upper hand, Marika crosses verbal swords again with a Secret Police spy determined to get his hands on Janos. Since Marika is now implicated in the doctor’s escape from Budapest, she is as much at risk despite her British nationality. Determined to render what aid she can, after her diplomat father arrives to take his wife and mother-in-law to the Austrian border, Marika announces she’s returning with Janos to help the wounded in the besieged city along with Rodney who is itching to cover the news story.

Well from that point out, Burchell turns it on and proceeds to paint scenes that convince me that I’d never have the nerve to be a secret agent and also show me a little of what the citizens fleeing from bombed cities feel. There is a chilling scene during which Marika must face her fears and confront an enemy followed by a terrible one as she, Rodney, and Janos pass through a sea of humanity determined to reach the border with Austria.

Burchell wrote the book the year after the Uprising and I can’t help but think that if she didn’t interview actual Hungarians who fled, then she used her knowledge of the refugees  she and her sister helped escape from Europe before WWII began.

“To be refugees — without money and in a foreign country — that also is not so pleasant. How can one say what tomorrow will bring, or what one will decide to do?”

She also cheekily tosses in a brief reference to “Tosca.”

The romance is of the quiet and understated variety. An attempt is made at a love triangle but it’s fairly obvious with whom Marika will end up. His “dark glance” which makes her heart “beat unaccountably fast” rather gives it away. The Other Guy is still a nice guy and a great character who asks Marika some hard truths and makes her think about what is going on. I do hope that even more of Burchell’s OOP books will be released soon. A