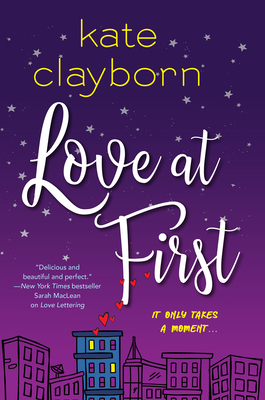 Oh what a delight this book was. I think I was expecting a book a little more serious, a little more like Love Lettering which I enjoyed in a different way. But as it happened, Love at First has a different tone, a more… light-hearted charm. There’s plenty of snappy banter from not just the main characters but the wider cast too. It somehow softened the underlying themes of hurt and rejection that the various characters had experienced from others in their lives in one way or another so that when those bits were revealed they packed more of a punch. I would be feeling upbeat and smiling and then bam! the vulnerable underbelly would come along and there would be swooping feeling in my stomach as I experienced a sudden change in emotion. I’m not going to say I was lulled into a false sense of security because I don’t feel there was anything false or deceptive about the book or its themes. No, it wasn’t that. It was much better than that.

The story starts when 15-year-old Will Sterling is waiting outside a small apartment building in Chicago for his mother to conduct some kind of mysterious business with one of the tenants there (as it turns out, it is an uncle he had not met before). While he’s waiting he hears a girl laughing and something changes in his heart parts. However, just as he’s about to gather his courage to speak to her, he overhears something his mother says instead and this changes everything. It’s a while until we find out what Will overheard. That was very sneaky of you. Of course, I had to keep reading because I wanted to know.

The girl, was Eleanora (Nora) Clarke, aged 13 at the time, who was staying for the summer with her Nonna, as she did most summers of her life.

16 years later, Will has inherited an apartment in that very same building. And Nora now lives there, in her Nonna’s apartment which she herself has inherited. Will and Nora however have very different feelings about the building. For Nora it represents stability and family and history and love. She is reluctant for anything to change in the building and is fiercely protective of the other tenants, mostly older people who have lived there for years and years. Will’s feelings are very different. But under the terms of Uncle Donny’s will, he has to hold onto it for at least a year.

Once Nora understands that Will is not inclined to move in and and become a part of the unchanging landscape; that he plans to make big changes indeed, she becomes inclined to dislike him. It’s difficult to do but she gives it the college try.

She decided that he was, in fact, smirking, a smirk to match his stance, and also a smirk that went obnoxiously nicely with his still very attractive face: wind-machine hair, thick and deep brown to complement dark eyebrows and lashes that would probably cost her at least a hundred and fifty bucks at Sephora, because there was no justice for women in this world.

Will is a doctor and keeps very much to himself generally. He does not have many friends and is a bit stuck one what to do with the apartment. However a suggestion from a colleague (a more senior doctor at the hospital – more on him later) starts him on the path of looking into using the apartment as a short-term rental a la Airbnb. Naturally, the other tenants are horrified and more than a little anxious about the prospect of not only a stranger in their building but a series of strangers. Nora makes it her mission in life to dissuade Will from this course and over the time he is fixing up the apartment ready for his first tenant, Nora coordinates a series of events, hijinks and nefarious plans designed to persuade him to her side. Will is wise to her shenanigans and things do not go as planned, largely because Will is actually pretty charming and very good with people. He’s hard to dislike.

For his part, Will still remembers that first nearly-meeting 16 years earlier and everything he’s learned about Nora since returning to the building has only made his heart parts sit up and take notice even more. He’s not going to do anything about it though. No sirree.

She took a step inside, and he and his heart had a firm, silent communication about its recent behavior.

Needless to say, both Nora and Will are very bad at their respective missions.

It’s the best kind of rivals to lovers because neither of them is really wrong and there is no meanness. This meant I didn’t have to take sides or grapple with any angry feelings, which has happened before when I felt that one character in an “enemies to lovers” or “rivals to lovers” trope had gone too far. Even though Nora calls it their “feud” she and Will are never really enemies.

The other tenants in the building, Mr and Mrs Salas, Marian and Emily Goodnight, Benny and the extremely (delightfully!) grumpy Jonas are all major players in the story; Will slowly builds his own relationships and connections with them, Nora having had them already for most of her life. They’re more than bit players, each having an important role in Will’s and Nora’s lives, both separately and together.

Eventually, Will’s actions in fixing up Uncle Donny’s apartment (he added a towel rail!) inspire Nora to make some small changes to Nonna’s apartment too. Not too many, mind. But maybe just a few things in the bathroom? And Will’s so good at fixing things up, it’s only natural she’d ask for his help, right? Clever Nora.

Well, when you put two people who have amazing chemistry in a room with each other for very long, it’s inevitable that romance will bloom and sexytimes will happen. And it very does.

Seconds later Will came to the doorway, tucking his hands into his pockets and leaning against the frame. Will excelled in doorways, frankly. Excellent standing, leaning, kissing, touching. A+ in all those subjects, and now he was adding a fourth: looking.

I don’t want to spoil the mystery of the first chapter so I can’t say too much about just why Will is scared of who he’d become if he allowed himself to have a relationship with Nora but that is one of the key conflicts in the story. It’s not a conflict I’ve read before. With what we learn about Will as the book unfolds, it makes entire sense he’d feel that way.

The book is filled with wonderful lines which capture feelings and moments so perfectly. There’s a fairy-tale quality to it in some ways, a heightened sense of some kind of magic awaiting. (Perhaps I’m influenced here by the cover which reminds me of the TV series Bewitched for some reason.)

The story is largely confined to the apartment building and the apartment owners but there is one particular character I cannot fail to mention. As much as I loved Nora and Will (especially Will – but I am a hero-centric reader after all) there was another who snuck in under my guard and now I have a low-key crush.

Dr. Gerald Abraham is the senior doctor I mentioned earlier. His ex-wife, Sally, has various short-term rental apartments and Gerald puts Will in touch with her for advice about how to rent out his unit. Somehow, Will reluctantly finds himself giving dating advice to Gerald who, it is clear, would like to win back Sally’s affections.  Gerald is stuffy and proper and not very emotive and OMG I came to love him. He tries so hard!!  My feelings for Gerald were completely unexpected and that made it all the better.

“Yes, but this brings us to the second problem, which is that Sally has always felt I am too devoted to routines.”
Will cocked his head, nodding. He guessed that explained the white coat. The constant talk of protocol. The thing was, Gerald Abraham was a good doctor. What he lacked in bedside manner he absolutely made up for in precision, in the kind of careful, repetitive follow-through that meant he hardly ever missed a thing.
“Sally, as I am sure you have observed, prefers more spontaneity.” He looked sideways at Will. “And so in asking her to dinner again, what have I done?”

Gerald has some of the best lines in the book and in the latter third or so he caused me to laugh out loud in absolute delight many times. I would like to start a petition to get you to write a short story from Gerald’s point of view. (DA Readers, please read this book and join me! #MoreGerald)

There are some sad sections and bittersweet sections, laugh out loud moments, plenty of sexy and sizzle and so much charm in Love at First. There’s poetry and robots and baking. And then there’s Gerald. *swoon*

→ Kaetrin
Previous article: REVIEW: What Kind of Day (Six 32 Central Book 1) by Mina V. Esguerra
Next Post: REVIEW: The City in the Middle of the Night by Charlie Jane Anders