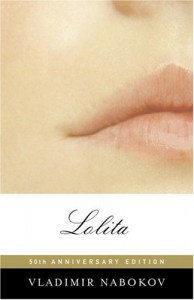 I wasn’t sure what to expect when I picked this book up; I recall flipping through my parents’ copy in my adolescence, fruitlessly trying to find dirty scenes. Now, 25 years later, I had by osmosis picked up the basic plot of the book and been inculcated with the general cultural understanding of what a “Lolita” or a “nymphet” is meant to represent (more on that in a bit).

I find postmodern books difficult to review. On the one hand, there is a story and characterization in Lolita – an interesting story and interesting characterization, actually. But my perhaps simplistic take on postmodernism dictates that in focusing on the story and the characters, I am missing some larger point – that by taking the characters literally I am being hopelessly unsophisticated in my evaluation of the book. Indeed, there are themes here – the use of language to enthrall and obfuscate, the expatriate experience, American consumerism, to name a few – that transcend the basic story of an aging pederast and his “love” for a rather unremarkable 12-year-old girl. But there is, again, a story, and for the purposes of this review that’s mostly what I’ll be talking about.

This being a review, I suppose I should give a plot synopsis, for anyone unfamiliar with Lolita. Humbert Humbert (an alias) tells the story from a jail cell as he awaits trial for a crime that is only revealed at the end of the book. The book actually begins with notes from a psychiatrist who has studied Humbert’s case; he reveals that Humbert died of a heart attack in jail and Lolita died in childbirth (Humbert has specified that the story may only be published after Lolita’s death, which he imagines will be long after his own; he’s wrong about that). Humbert details his upbringing on the French Riviera, raised by his father (a hotelier) and his aunt after his mother’s untimely death. The pivotal occasion of his childhood, he would have you believe, was the youthful passion he conceived for a visitor to the hotel, Annabel Leigh (the similarity to the Poe poem is intentional and the book contains a number of allusions to it). Both are around 12 at the time, and being that young Annabel is fairly strictly chaperoned by her parents, their furtive attempts to consummate said passion are continually thwarted. Annabel and her family leave the resort, and four months later she is dead of typhus. From that moment on (again, at least from Humbert’s point of view), he is obsessed with “nymphets”, young girls (between 9 and 14) that he believes possess a certain sexual precociousness that sets them apart from their contemporaries.

Humbert attempts to sublimate his unwholesome longings in marriage (his wife eventually leaves him for another man), and eventually travels to America and finds himself in the house of one Charlotte Haze, looking to rent a room. Or to be more exact, he’s actually looking to get out of town as quickly as possible, but first has to extricate himself from Charlotte’s rapacious clutches. Until he is distracted by Charlotte’s 12-year-old daughter, Dolores. Alias Dolly, Lo, and yes, Lolita.

Lolita is a hard character to pin down; we only see her through Humbert’s eyes, and I found myself unwilling to accept his various versions of her: as a promiscuous adolescent, as hopelessly vulgar and low-brow in her interests, as a “nymphet” who cruelly manipulates Humbert’s desires in order to get what she can out of him, and then drops him the first chance she gets. It’s that last interpretation – the now somewhat iconic nymphet – that I take the most issue with. Do underage girls sometimes test their sexuality with older men? Sure. Hopefully, they don’t end up raped repeatedly as Lolita is. I’ve seen bits and pieces of the Stanley Kubrick film version of Lolita, but I can’t connect with it – Sue Lyon is clearly portraying a character who is closer to 17 than 12 (which is probably the only way the film could’ve been made at the time). To make Lolita plausibly desirable to the average (non-perverted) male seems to me to detract hugely from the point that Humbert is depraved in his desires. Not just because he takes advantage of Lolita, which would be wrong even if she were somewhat sexually mature as Lyon is in the film, but because he is attracted to Lolita and others of her ilk precisely because she is not sexually mature. That’s why it aggravates me that “Lolita” has somehow come to mean, in the cultural lexicon, an underage siren whose sexual appeal is recognizable to all. That definition seems to accept Humbert’s view of Lolita as accurate, when it is in fact warped, and thus is, in my mind, unfair to the character of Lolita, who, let’s face it, gets knocked around quite a bit by life in the course of the book.

As for Humbert himself-

The first thing one notices about Lolita is the language. Humbert Humbert has a narrative voice that trips along, clever and darkly funny and, well, seductive. Many discussions of Humbert focus on whether he is a sympathetic character or not, but I think that those of us who feel drawn to him may be mistaking enchantment for sympathy. Humbert does little to explain himself in any way that makes him sympathetic in the usual sense, even to those of us inclined to sympathy. But he does make himself appealing (and appalling, in turns) simply because he’s so smart, so funny, so unexpectedly charming. As a reader, you want to like him; you almost want him to like you. That seems to me to be one of Nabokov’s triumphs here – he manages to take a protagonist whose actions are repulsive, and who is frequently by his own admission weak and cowardly, and at least keep the reader with him throughout the narrative. Humbert’s thoughts and actions frequently disgusted me, but somehow he as a character did not disgust me. Each time I reacted with revulsion to a thought or observation of his, he quickly followed with a clever allusion or joke that distracted me from my disgust.

I’ve seen Lolita described as a love story and I reject that notion, not just because it is repulsive to me but because I don’t think Humbert is capable of love, and the “love” he bears for Lolita does not resemble any definition of the word I can think of. I do think that Nabokov’s love affair with language is central to the story, and I remain enormously impressed by how well he wrote in a language that was not his first. Many will recognize Humbert’s opening words:

Lolita, light of my life, fire of my loins. My sin, my soul. Lo-lee-ta: the tip of the tongue taking a trip of three steps down the palate to tap, at three, on the teeth. Lo. Lee. Ta. She was Lo, plain Lo, in the morning, standing four feet ten in one sock. She was Lola in slacks. She was Dolly at school. She was Dolores on the dotted line. But in my arms she was always Lolita. Did she have a precursor? She did, indeed she did. In point of fact, there might have been no Lolita at all had I not loved, one summer, an initial girl-child. In a princedom by the sea. Oh when? About as many years before Lolita was born as my age was that summer. You can always count on a murderer for a fancy prose style. Ladies and gentlemen of the jury, exhibit number one is what the seraphs, the misinformed, simple, noble-winged seraphs, envied. Look at this tangle of thorns.

…but every page is larded with magical, hysterical and heartbreaking prose:

And so we rolled East, I more devastated than braced with the satisfaction of my passion, and she glowing with health, her bi-iliac garland still as brief as a lad’s, although she had added two inches to her stature and eight pounds to her weight. We had been everywhere. We had really seen nothing. And I catch myself thinking today that our long journey had only defiled with a sinuous trail of slime the lovely, trustful, dreamy, enormous country that by then, in retrospect, was no more to us than a collection of dog-eared maps, ruined tour books, old tires, and her sobs in the night -‘ every night, every night -‘ the moment I feigned sleep.

…and though I felt guilty at times for laughing, Humbert’s casual contempt for Charlotte Haze – never too malicious, even when he’s considering knocking her off so he can be alone with Lolita – was very amusing (he routinely refers to her as “the Haze”, or sometimes, “big Haze”, in contrast to Lo, who is, of course, “little Haze”).

I’m not sure, ultimately, that I entirely “get” all that Lolita is about. But it impressed me, it made me laugh, and it moved me. It’s a brilliant novel. Grade: A.